The semifinals of the World Duel Carnival finally begin. On the Duel Tower, Shark and Yuma face off. Yuma starts the first part of their match and easily reduces Shark's Life Points. However, Shark, whose memories were modified by the power of Vetrix's crest, successfully counters and brutally assaults Yuma before Summoning "Number 32: Shark Drake". 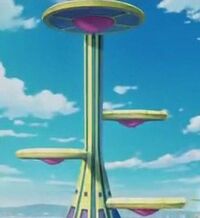 At Duel Tower Stadium, Mr. Heartland announces the start of the semifinals of the World Duel Carnival. A hatch opens on the stadium's floor and from it emerges a large tower, adorned with the WDC logo and several platforms. He calls the battlefield the Duel Tower. He urges the remaining Duelists to fight with all they have at this arena that pierces the sky. The Duels will be as follows: Yuma vs. Shark and Kite vs. Vetrix. Caswell points out that Yuma and Shark have Dueled before - Yuma should know all of Shark's plays. Flip is skeptical, saying that Shark will know Yuma's plays too, and doubts that Yuma could remember all of Shark's. Cathy asks whose side Flip is on and angrily scratches him across the face with her cat-nails multiple times, leaving deep, red marks (this scene is cut from the dub).

Tori is worried about the monster that was Summoned in Shark's Duel with Quattro, not sure if Yuma could defeat it. She urges Yuma to be careful. Heartland continues, hailing Yuma as a "miracle boy" who was virtually unknown before the tournament's start, but who managed to survive and enter the finals. Yuma enters the arena hopping around and falls onto one of the tower's lowered platforms. Shark begins to enter and Heartland announces him as one who was banished from the world of Dueling, but made his comeback from the very bottom, calling him "the avenger". Shark's face is expressionless and Yuma wonders if there's something wrong. Their platform rises and Heartland says that only the winner will advance to the top platform. He wonders who will enter the final match out of these two and says the "curtain" is now raised on their Duel.

Yuma is still wondering what's gone on with Shark and Astral speculates that its the darkness of the "Number". Though Shark acquired a "Chaos Number" against Quattro, it was only possible through the darkness of the "Number" manipulating him. From a private box seat, Vetrix watches on TV. He wonders how the Duel will go, but says that the winner has already been decided. Yuma tells Shark to get a hold of himself, but Shark continues to ignore him while setting up his D-Pad and Duel Gazer. Astral tells Yuma not to let his guard down - if the "Number" is influencing him, his battle instinct will be at maximum. Yuma sets up his own D-Pad and D-Gazer and the Duel begins. Yuma goes first, Setting a monster and a card. Astral comments that he's Set "Dododo Bot" and "Impenetrable Attack". With 1900 DEF and the Trap Card's effect, Yuma will have a good chance of surviving the first turn.

Shark Normal Summons "Spear Shark". It has 1600 ATK, so Yuma is excited. Astral tells him that Shark isn't naive. Shark attacks and Astral is shocked that he'd be so reckless. "Spear Shark" launches a spearhead at the Set monster. "Dododo Bot" is flipped and the spearhead rebounds off its shield, bouncing back at Shark and inflicting 300 damage. Still expressionless, Shark is thrown backwards. Heartland is shocked as well, saying he received damage as he attacked casually. Bronk says he's never seen Shark like this and Flip compares it to how Yuma used to Duel in the past. Caswell suggests that Shark may be expecting Yuma to know his plays, so using a different strategy could throw him off. Bronk asks if he means that Shark took damage on purpose then. Shark rises to his feet, Sets a card and ends his turn. Yuma says he could feel a strong fighting spirit in his previous Duels with Shark. Astral reminds him not to let his guard down and to be careful of that Set card.

Yuma Normal Summons "Gogogo Golem" and switches "Dododo Bot" to Attack Position. Astral tries to call Yuma off, but he attacks "Spear Shark" with "Gogogo Golem". "Spear Shark" is destroyed and Shark's Life Points fall to 3500 as he's thrown backwards again. Yuma muses that he still hasn't recovered and orders "Dododo Bot" to attack directly with "Thunder Blade". Lightning strikes Shark and his Life Points fall to 1700 as he screams in pain. Heartland wonders if Shark will stand after such overwhelming attacks. Yuma tells Shark to stand and come at him as he had in their previous Duels. The crowd begins to cheer Shark's name and Bronk says he can't believe Shark was damaged like that so easily. Yuma says that Shark's nickname came from the way he Duels - and he isn't showing it. A shark who is unwilling to fight is not a Shark.

Yuma examines his hand, which contains "Rivals Unite", "Gogogo Ghost", "Half Unbreak" and "Traplin". He Sets a card and ends his turn, urging Shark on again. As Shark tries to stand, he thinks to himself that he has forgotten why he is Dueling. Vetrix appears before him in his mind's eye and asks if he's forgotten. Shark address him as "Vetrix" and Vetrix is pleased that he at least remembers him. He says that though Shark's memories have faded, all will be fine if he listens to Vetrix. He tells Shark that is he Dueling for him. He calls Shark his puppet and his crest radiates out from eye. In reality, Shark violently shakes on the ground. Heartland wonders what's happening. Vetrix asks if Shark remembers who he must defeat yet. He adds an image of Quattro playing "Flaming Hell Blessing" against Rio. Quattro's form is replaced by Vetrix - and then by Dr. Faker. Shark says he remembers that name and Vetrix says he should - it was Faker that injured his sister after all.

Shark believes him and Vetrix adds that there's one more person he must defeat - the one in front of him now. Faker's image is replaced by Yuma's, who laughs evilly. Vetrix says that Yuma has always tried to obstruct Shark's goal and that he worked with Dr. Faker.

Shark finally gets to his feet, glowing with Vetrix's power. He tells Yuma that what he did was unforgivable. Yuma is confused and Shark says it's all Yuma's fault as Vetrix's crest glows on the back of his hand. Yuma asks if it's Vetrix controlling Shark rather than the "Number". Astral responds that would seem to be the case. Vetrix speaks to himself, saying that you could say that - or more precisely, the "Number" that served Vetrix has fused with Shark, making him a puppet. Vetrix tells Shark to eliminate Yuma now. Shark Normal Summons "Double Shark" and activates "Aqua Jet", increasing its ATK to 2200 until the End Phase. It attacks "Gogogo Golem", but Yuma activates his face-down "Impenetrable Attack", which would prevent his monster's destruction this turn. Shark activates the "Shark Spark" Quick-Play Spell Card from his hand, negating "Impenetrable Attack". The attack continues and "Double Shark" destroys "Gogogo Golem" by biting its arms off. Yuma's Life Points fall to 3600. Tori yells Yuma's name and Shark reveals that "Double Shark" may attack twice per Battle Phase. It rips "Dododo Bot" apart, dropping Yuma's Life Points to 3200 and Yuma is knocked down by the force of the attack.

The crowd cheers and Heartland compliments Shark for launching a counterattack when he was almost at the point of defeat, finishing with "Heart Burning!" Bronk says Shark is acting completely different now and Caswell asks what's going on. Flip suggests that Shark was feigning the whole thing by acting like a "kitten", causing Cathy to attack him again (this scene is cut from the dub). Shark says that it's not over and activates "Upswell", Special Summoning "Spear Shark" from his Graveyard with its ATK reduced by 1000. He orders "Spear Shark" to attack directly and avenge his sister, dropping Yuma's Life Points to 2600. Yuma thinks Shark is much stronger when he's playing seriously like this, but Astral disagrees, saying he's even stronger than that due to Vetrix. Yuma asks if Vetrix distorted his memories and Astral says its likely - Vetrix had done something similiar to Trey when he Dueled Yuma. Shark Sets a card and adds that the ATK of "Double Shark" returns to normal now. Vetrix is impressed that Shark destroyed two monsters and got a direct attack so effortlessly. He adds that it's expected of the assassin he chose for Dr. Faker. Yuma says he must save Shark and Astral reminds him of the "Number" that Shark evolved. He says they must dispel Vetrix's influence before its Summoned.

Yuma says he'll awaken Shark using victory and the crowd cheers. He Normal Summons "Gogogo Ghost", who attacks "Spear Shark". Shark activates his face-down "Zeus' Breath", negating the attack and inflicting 800 damage to Yuma as he controls a WATER monster. Yuma's friends are worried as his Life Points fall to 1800. Bronk says Shark is Dueling flawlessly and Flip says that the real Duel has only just started. Yuma rises to his feet and Sets a card. Shark says it's no use - Yuma can't defeat him. He says he'll avenge his sister now. Yuma insists it wasn't him - it was Vetrix. Shark doesn't believe him and says that it's unforgivable that Yuma won't even admit his crime. He will send Yuma to hell with his own hands - and his "Number". Astral points out that Shark already has two Level 4 monsters out. Shark Normal Summons "Shocktopus" and immediately overlays it with his other monsters to Xyz Summon "Number 32: Shark Drake" in Attack Position. Vetrix tells him to bury Yuma alive.

"Double Shark" attacks "Gogogo Golem", but Yuma activates his face-down "Impenetrable Attack" to prevent "Gogogo Golem" from being destroyed this turn, however Shark activates "Shark Spark" to negate and destroy "Impenetrable Attack". "Double Shark" then destroys "Gogogo Golem" (Yuma: 4000 → 3600 LP). "Double Shark" then attacks and destroys "Dododo Bot" as it can attack twice during each Battle Phase (Yuma: 3600 → 3200 LP). Since one of Yuma's monsters was destroyed by battle, Shark activates "Upswell" to revive "Spear Shark" (as it's a WATER monster) in Attack Position with its original ATK reduced by 1000 (

Shark prepares to overlay his monsters. 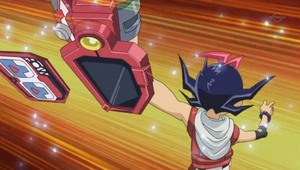 When Yuma activates his D-Pad, the zones come from off-screen rather than from the D-Pad itself.