Due to Trey's power, Yuma forgets all about "Kattobing" and ends up forced into a corner. However Kazuma, helps Yuma continue the fierce Duel against Trey by using the power of the "Numbers" and Emperor's Key to break Trey's spell. Lastly Astral's last hope helps Yuma make a comeback by using "Utopia".

Astral, who is chained to a pillar, screams. Yuma sits up, frightened. Trey tells him to attack but Yuma says he is too scared. Trey Sets a card and calls Yuma a coward for not standing up. Yuma says he can't, saying Trey's monsters are too terrifying. Cathy, Flip and Caswell ask what is going on with Yuma. Bronk angrily tells Yuma to calm down and adds that he has to draw now. Yuma is very worried as he draws. Believing he has no choice, Yuma decides to forfeit, shocking everyone present.

Trey laughs at Yuma saying that without his Kattobingu spirit from his father, he is a coward. Bronk is confused and Cathy asks Yuma what is wrong with him. Trey tells them that he erased Yuma's kattobingu spirit and trapped Astral who he then reveals to everyone. Flip asks what Astral is doing up there. Trey explains to them he turned Yuma into a loser and trapped Astral, much to their indignation. Trey tells Yuma that he does not accept forfeit (The rest of Yuma's turn is skipped), saying that he will use his full power on Yuma, who is frightened even more.

Trey says that this is Yuma's final Duel and proceeds with his turn. He Summons "Chronomaly Mud Golem". He then attacks "Gogogo Golem" with it, though it cannot be Destroyed by battle while in Defense Position. Yuma takes damage due to the piercing battle damage effect of "Mud Golem". Trey then activates "Heart of Stone" allowing "Mud Golem" to attack again. This time, "Gogogo Golem" is destroyed and Yuma's Life Points drop to 1300. Yuma's friends are shocked that he is losing. Trey then attacks Yuma directly with "Number 33: Chronomaly Machu Mech" saying that Yuma has lost the Duel. 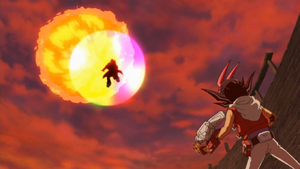 "Gagaga Gardna" shields Yuma from the attack of "Number 33".

Astral decides to help Yuma by using the last of his strength to remind Yuma about his kattobingu spirit. Yuma remembers some of his Duels and wonders if he truly so skilled. Yuma then sees "Gagaga Gardna" glowing and Summons it by its own effect, as a direct attack was declared. This surprises everyone, including Trey. "Gagaga Gardna" is destroyed and Yuma's Life Points drop to 400. Trey wonders how Yuma remembered the effect of "Gardna" in his fear and realizes that Astral must have helped Yuma. He decides to torture Astral. Flip points out that Astral cannot take that much power. Yuma then sits up as the pillar Astral chained to crumbles. 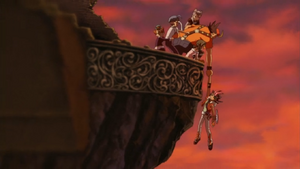 Before Astral disappears, he tells Yuma not to give up. Tori Meadows cries over Astral's apparent death. Trey tells Yuma that nobody is left to help him. In his fear, Yuma falls backwards from the pillar on which he stood, barely managing to grab the edge. Cathy panics and Bronk tells Yuma to hang on, but Caswell says that Yuma cannot be hurt by the Augmented reality. Bronk tells Caswell that if Yuma's hand slips, he would still fall. Caswell realizes that Yuma was standing on a highway under construction that the AR projected itself on. Yuma's friends run to him as his hand slips, and Bronk catches him. Yuma asks why they are helping him. Bronk asks Yuma if he can't remember his friends, surprising Yuma as he thought that they were indifferent to him. Tori tells Yuma that they care about him, with Cathy in agreement. Caswell says that it is the reason why they are friends and Flip says that they always will. As they help Yuma up, Bronk tells Yuma that Trey tried to change Yuma's memories to turn him into a coward. He then grabs Yuma by the collar, saying that Yuma is a guy who hates giving up. Yuma tries to remember, but barely manages.

Trey interrupts them by knocking Yuma's friends away from him. This causes Yuma's Key to fall, but Tori catches it. Everyone lands badly, except for Cathy, who lands well. Then, frozen pillars rise from the ground, arcing with electricity. Trey tells Yuma that they should settle the matter, just the two of them. Yuma falls to the ground. Yuma's friends ask him if he is well, but he cannot hear them. Bronk gets mad at Trey. Tori is upset that they cannot help Yuma anymore and feels the energy from the Emperor's Key. 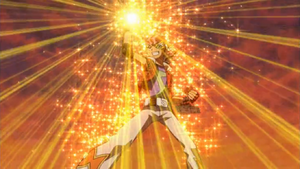 Inside the Key, Yuma's father mutters that Yuma is in trouble and adds that someone must be up to no good. He used the power of twelve "Numbers" to attempt to remove the influence Trey has over Yuma. He then tells Yuma to remember his kattobingu spirit as a beam shoots from the Key, breaking the barrier and striking Trey's crest, removing the influence he has over Yuma. The figure tells Yuma to remember what he learned from him. Memories of Yuma attacking with "Number C39: Utopia Ray" during his Duel with Fortuno, attacking with "Number 39: Utopia Ray" during his Duel with Nelson, and his first victory, attacking with "Utopia" in a Duel against Shark fill his mind. At first Yuma is unbelieving, but after seeing more, he wonders if they are real. Tori throws the Emperor's Key to Yuma. When Yuma catches the Key, it shines. Then, he hears his father telling him to remember what he passed on to him. Yuma now remembers his kattobingu spirit.

Yuma drops to his knees, crying over Astral's death. Trey yells at Yuma that he must do this for his family. Trey activates "Chronomaly City Babylon", Banishing "Chronomaly Aztec Mask Golem" from his Graveyard to Summon "Chronomaly Cabrera Trebuchet" in Defense Position. He then ends his turn. He adds that Yuma has only 400 Life Points left while he has "Cabrera Trebuchet" and "Machu Mech". Trey says that Yuma will lose the Duel in his next turn because Astral isn't with him anymore, but Yuma says he will win and draws. Yuma remembers Astral saying that he will leave one day but leave traces of his legacy. Yuma says that Astral still exists in his memories. He remembers Astral giving him advice about Dueling. Yuma says that he will lose if "Cabrera Trebuchet" and "Machu Mech" attack. He then decides to either destroy "Cabrera Trebuchet" or "Machu Mech". He then sees his Extra Deck shining. Yuma remembers that Astral left it for him. He then remembers Astral telling him that everything is up to him and reminding him about his kattobingu spirit. 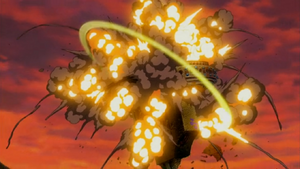 Yuma activates "Gagagarevange" and Special Summons "Gagaga Magician" from the Graveyard. He then Summons "Flelf" and activates its effect. He sends "Overlay Eater" to his Graveyard to increase the Level of "Flelf" to 4. He overlays "Gagaga Magician" and "Flelf" to Xyz Summon "Number 39: Utopia". Yuma says that Astral left him "Utopia" to give him hope. Trey points out that Yuma has only 400 Life Points left, but Yuma says that he would still fight if he had only 1 Life Point left. Yuma activates the second effect of "Gagagarevenge" which increases the ATK of "Utopia" by 300 because "Gagaga Magician" was used as an Xyz Material. Yuma tells "Utopia" to attack "Machu Mech", destroying it. 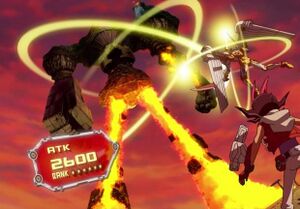 Trey wonders how Yuma can still Duel well without Astral. Yuma responds that Astral will always be with him and adds that Trey cannot change that. Trey's Crest glows as he begins his turn. He Tributes "Cabrera Trebuchet" to Summon "Chronomaly Sol Monolith". Trey then changes the Level of "Mud Golem" to 6 by the effect of "Sol Monolith". He then overlays "Mud Golem" and "Sol Monolith" to Xyz Summon "Number 6: Chronomaly Atlandis". Trey then equips a "Number" from his Graveyard by the effect of "Atlandis". He equips "Machu Mech", increasing the ATK of "Atlandis" to 5000. Bronk and Caswell are surprised by the high of ATK of Trey's monster. Trey attacks "Utopia" with "Atlandis", but Yuma detaches an Overlay Unit from "Utopia" to negate the attack. Trey then activates another effect of "Atlandis", detaching an Overlay Unit to halve Yuma's Life Points, reducing them to 200. Trey says that Yuma won't survive without Astral. He adds that it is over.

Turn 6: Yuma
Yuma draws. He then tries to surrender, but Trey refuses to accept it. Yuma's turn is skipped.

"Number 33: Chronomaly Machu Mech" attacks directly, but Astral uses the last of his power to remind Yuma of Kattobingu. Yuma's hand contains "Gagaga Gardna", "Flelf", and "Overlay Eater". As he is being attacked directly, Yuma activates the effect of "Gagaga Gardna" to Special Summon it (

Turn 8: Yuma
At this point, Kazuma Tsukumo uses the power of the "Numbers" Yuma and Astral obtained to break the power of Trey's crest, restoring Yuma's memories and his personality to normal. Yuma draws "Gagagarevenge" and subsequently activates it to revive "Gagaga Magician" (

Yuma activates the effect of "Flelf" to send "Overlay Eater" from his hand to the Graveyard and increase the Level of "Flelf" by that of the sent monster ("Flelf":