"The Number Hunter, Part 2", known as "Galaxy-Eyes Photon Dragon Descends!" in the Japanese version, is the fourteenth episode of the Yu-Gi-Oh! ZEXAL anime. It first aired in Japan on July 11, 2011 and in the United States on March 10, 2012.

Kite overpowers Yuma with his "Galaxy-Eyes Photon Dragon", as Yuma desperately tries to turn the Duel around.

Yuma and Astral are surprised by Kite's skills; he Summoned both "Number 10: Illumiknight" and "Number 20: Giga-Brilliant" in one turn. Astral wonders who Kite is, why he is hunting the "Numbers" just like he and Yuma and why is it that Kite doesn't get possessed by the Numbers' powers. Kite ends his turn. Orbital 7 rants that Yuma should make his move quickly, but Kite tells him to stay quiet. Yuma draws "Gogogo Golem". Looking at each other, Yuma and Astral agree on Setting it, and Yuma ends his turn. 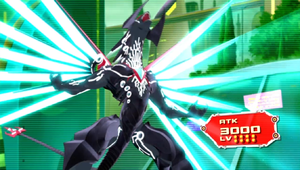 Kite draws and activates the effects of his "Number", detaching an Overlay Unit and sending one card from his hand to the Graveyard, he uses the effect of "Illumiknight" to draw a card, and by detaching an Overlay Unit, he increases the ATK of "Giga-Brilliant" by 300, to 2100. Declaring battle, both "Illumiknight" and "Giga-Brilliant" attack, but since "Gogogo Golem" is in Defense Position, it's not destroyed by battle once per turn, meaning the second attack destroys it. Yuma says he's saved, but Kite says he'll start going all out from now on. Tributing both of his "Numbers", Kite Special Summons his strongest monster, "Galaxy-Eyes Photon Dragon". While Yuma and Astral are amazed by his dragon, Kite ends his turn. Kite explains that because he increased the ATK of "Giga-Brilliant", his monsters fulfilled the Summoning conditions of "Galaxy-Eyes"; since it needs two monsters with at least 2000 ATK as a Tribute to be Special Summoned. 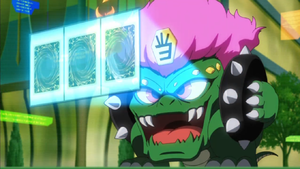 Surprised by the 3000 ATK of "Galaxy-Eyes", Yuma says he's never heard of it. Yuma thinks about how he can stop "Galaxy-Eyes", and declares his best chance is to summon his monster whose ATK comes closest to that of "Galaxy-Eyes"; "Number 39: Utopia". Yuma Normal Summons "Gagaga Magician", and activates "Monster Slots", banishing "Gogogo Golem" in his Graveyard who has the same Level as a monster on his field, "Gagaga Magician". Yuma is then allowed to draw a card, and if it's the same Level as the selected and banished monster, it can be Special Summoned. If it's not, the drawn card and the monster on the field will be banished. Yuma draws "Ganbara Knight", which is Level 4, and is thus able to Special Summon it. Yuma overlays his two monsters to Xyz Summon his "Utopia" in Attack Position. Kite declares that Yuma's "Numbers" card has finally appeared.

Dr. Faker and Mr. Heartland are having a discussion. Mr. Heartland asked Faker permission to organize the World Duel Carnival. According to him, it will attract Duelists with the "Numbers" cards from all over the world. By letting Kite enter the tournament, they will be able to obtain a lot of "Numbers". Dr. Faker declares that since it's his idea, it's a good one, and allows him to organize the tournament, but asks what would happen if Kite were to lose. Mr. Heartland replies that's impossible, as Kite's Deck was created by the two of them, making it an other world's science crystal. Dr. Faker replies positive, telling Heartland to organize the Carnival. 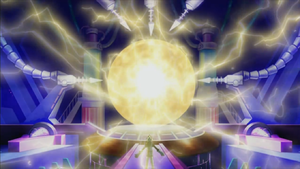 Ending their conversation, Dr. Faker heads towards another room in his base, saying he should start the Sphere Field experiment, and that with it, he can extract the Numbers' power. The trash starts flowing again, and Hart Tenjo is seen standing on the platform in the middle again, breathing heavily. Astral World is being attacked this way once more, and Hart says he wants to hear more screams, ending with a huge scream for more. Dr. Faker says that Hart should continue, that with his scream they will fight and crush the Astral World.

Back at the Duel, Yuma says he will still attack, explaining to Astral that during his Duel with Shark he learned that "Utopia" isn't invincible, and that offense is the greatest defense. Astral replies saying that it's not a bad way of fighting, and that Yuma found a good one, and that a drawn-out fight against Kite would be foolish. Yuma activates "Blustering Winds", raising the ATK and DEF of "Utopia" by 1000 each. Attacking "Galaxy-Eyes" , Yuma is confident that it will defeat "Galaxy-Eyes". Kite says that it's sad that after all the effort put into Summoning it. Yuma says that it will soon be sent to the Graveyard. However Kite replies that it will be Yuma's monster that will be destroyed, telling Yuma not to underestimate his monster's strength, and activates it's effect; when it battles, "Galaxy-Eyes" can banish itself and the opponent. Yuma ends his Battle Phase and both monsters return. Yuma is relieved that "Utopia" is back, but Kite disappoints him by telling him about the other effect of "Galaxy-Eyes": If the removed monster was an Xyz Monster, "Galaxy-Eyes" will gain 500 ATK for every Overlay Unit the monster lost. Astral declares that the ATK of "Galaxy-Eyes" is 4000 now, which Yuma says is the exact same as his LP.

Orbital 7 asks Kite to extract every drop of Yuma's soul. Yuma asks what he means, and remembers what the criminal whose soul Kite took before looked like when he found him, saying that guy indeed looked like he just had his soul taken. Kite scolds Orbital 7 once again for saying such an unnecessary thing, and that it's absolutely despicable to impose the opponent with such fear. Scared of Kite, again, Orbital quickly apologizes. Hearing this, Yuma immediately demands an explanation from Kite about what Orbital meant. Saying the half-hearted fear will only make Yuma feel worse Kite says he'll explain, his method of obtaining "Numbers" is a little overbearing, when he extracts "Numbers", he also extracts a soul. Yuma asks where this soul is going, but Kite says he doesn't know as he doesn't influence that. Astral worries as this time Yuma's soul is on the line too. Yuma Sets a card and ends his turn. 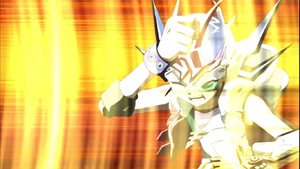 Kite draws and declares battle with "Galaxy-Eyes" but since "Utopia" is a "Numbers", it can't be destroyed by "Galaxy-Eyes", who's but Yuma still takes 1500 points of damage. Kite then activates "Photon Wind", which deals the opponent 1000 points of damage if it's user fails to destroy a monster, and allows them to draw a card. Yuma tries to draw, but shivers while doing so. Thinking how strong Kite is, he wonders what to do, and considers switching "Utopia" to Defense Position, however, Astral, who apparently just read Yuma's mind, tells him Kite probably already read Yuma's move to use a "Numbers" to defend. Asking what he should do then, Astral reminds Yuma that "offense is the best defense", saying it might be so, Yuma says that if he loses Astral might disappear. 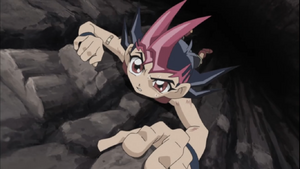 Astral replies that this time they're in the same situation. He asks Astral if he is scared, but Astral says he doesn't know, as this is the last they can do, and that it's his destiny. Yuma is surprised Astral is so calm, but Astral tells him to get over his fear, as he cannot win if he shows his opponent his back. Yuma flashes back to him climbing a mountain, and his father telling him to "kattobingu". 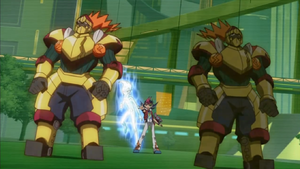 Yuma tells Astral to unite their powers in this Duel. Fully psyched, Yuma Summons "Zubaba Knight", and activates his face-down "Copy Knight", a Trap Card which summons itself to the field when a Warrior was Summoned, and becomes the same Level and is treated as having the same name as the Summoned Warrior. Overlaying his two Level 3 monsters, Yuma Xyz Summons "Number 17: Leviathan Dragon".

Orbital 7 is shocked to see that Yuma has a second "Numbers", and Kite determines that Yuma is not just a Number holder, but also a Numbers Hunter, but says he'll still take all of Yuma's "Number"s. However, Yuma activates the effect of "Leviathan Dragon", detaching an Overlay Unit to increase its ATK by 500. Kite says it's not enough to beat "Galaxy-Eyes", but Yuma tell him it's not his goal. He activates "Cross Attack", which activates when he has two monsters with the same ATK, in this case, "Utopia" and "Leviathan", who both have 2500 ATK. It will allow one of then to attack directly this turn, while the other cannot attack. "Utopia" attacks, but Kite says Yuma tries to evade defeat by attacking and activates his face-down "Lumenize", which activates when there is a LIGHT monster on his field. It negates the attack and at the same time increases the ATK of a LIGHT monster he controls by the ATK of the attacking monster, giving "Galaxy-Eyes" 6500 ATK. Worried about what would happen if "Galaxy-Eyes" were to attack, Astral tells him to Set his Trap Card, "Mirror Mail" which would change the target monster's ATK into those of the attacker, allowing Yuma's "Numbers" to avoid destruction, and at the same time defeat "Galaxy-Eyes". 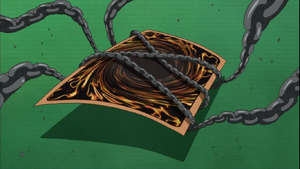 Meanwhile, Dr. Faker tells Hart to give him more, and Astral World is being further attacked. However, Hart suddenly screams in pain. Kite Normal Summons "Photon Cerberus", telling Yuma that he would never recklessly attack if they had a card Set, and reveals that "Photon Cerberus" prevents both players from activating Trap Cards during the turn it is Summoned. Astral is stunned, as Kite's Dueling surpassed his. Kite declares battle, and Yuma turns to Astral, but Astral's too overwhelmed, and says it's the ends for them. At the platform, Hart collapses, and silently asks for his brother to come (this scene is cut from the dub). Orbital 7 sounds an alarm, and projects an image of Hart lying on the ground. Stunned by this image, Kite immediately releases Yuma from his Duel Anchor, tells Yuma his name, and to remember it well,(In the dub, he says he must leave) and leaves on Orbital 7, which transformed into a motorcycle-like form, and disappears in a hyper drive-like style. Time starts flowing again. Tori completes her fall, which stopped when Orbital 7 slowed down time, and the truck that would've hit her, or Yuma, drives past Yuma, splashing him with water. Tori asks what happened. Yuma asks what is kattobingu and what's being a Duel Champion, adding that this way he could never be a Duel Champion, and then cries out in frustration (in the dub, Yuma states when everything is at stake, he doesn't have what it takes even when he "feels the flow" and that he messed everything up then begins to cry).

4/1500/1000) in Attack Position. Yuma activates "Monster Slots" to target "Gagaga Magician" and banish "Gogogo Golem" from his Graveyard (as "Gogogo Golem" has the same level as "Gagaga Magician") in order to draw a card. If the drawn card is a monster of the same Level as the other two, he may Special Summon it. Otherwise, both the drawn card and the targeted monster are banished. Yuma draws "Ganbara Knight", so the latter is Special Summoned (

3/1300/600) in Attack Position. As "Photon Cerberus" was Normal Summoned, its effect prevents both players from activating Trap Cards this turn. "Galaxy-Eyes Photon Dragon" attacks "Utopia", which would win Kite the Duel, but Orbital 7 informs Kite that Hart has collapsed so Kite cancels the Duel and leaves.