"The Number Hunter, Part 1", known as "Hunter of Souls! Numbers Hunter Appears!" in the Japanese version, is the thirteenth episode of the Yu-Gi-Oh! ZEXAL anime. It first aired in Japan on July 4, 2011 and in the United States on March 3, 2012.

Yuma is confronted by Kite Tenjo, a boy who calls himself the "Numbers Hunter" Elsewhere, the plans of Mr. Heartland and Dr. Faker come to light.

One of Heartland City's cleanup robots falls down from a high floor in Heartland Shopping Mall where Yuma and Tori wonder what happened. Yuma's sister calls Yuma over his Duel Gazer, asking him where he is. Yuma denies that he's at the shopping mall, but his sister says she can see him clearly on TV. On the same TV-screen Yuma saw himself, the cause of the robot falling down is shown; someone up high in the mall has taken people hostage and demands money and a helicopter to escape. Astral appears from Emperor's Key, telling Yuma to look at the culprit's shoulder, where the number '56' can be seen, signaling the thug is being controlled by a "Number". 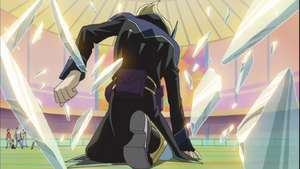 Yuma tries to get up higher in the mall, but suddenly, somebody crashes down through the mall's glass ceiling. However, the glass doesn't fall, but keep floating around. The culprit nervously asks who he is. The person tells him he is called the Number Hunter, and says he has a "Number" card. The robot that is with the hunter, seeing the wrecked cleanup robot on the ground, says they should take on the criminal, but quickly calls the Hunter Kite, revealing his name. The criminal, understanding what the blank "Number" card in his possession is, accepts Kite's challenge, under the conditions that the winner takes the loser's "Numbers". 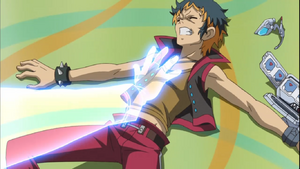 Meanwhile, Yuma is trying to get up the stairway, but is blocked by two women. Astral comes floating down, telling Yuma a Duel is going on on the top floor. Then, somebody screams. Kite attacks the criminal's "Number 56: Gold Rat" with "Photon Stream of Destruction" from his "Galaxy-Eyes Photon Dragon", which appears as a large, shadowed Dragon. Kite stretches out his hand, saying Photon Hand, and extracts a glowing sphere from the criminal's body, which, once in his hand, turns into the card for "Gold Rat" similar to the way Astral does. The criminal appears to age a lot suddenly, and falls down (in the dub, the hand reaching in is cut). When Yuma arrives, he finds the culprit, lying on his back, continuously saying "Numbers Hunter". Astral checks the criminal, and finds out his "Numbers" is gone. While Yuma thinks about what happened, time start flowing again and the police grabs both him and the culprit, not understanding what just happened, as time stopped. 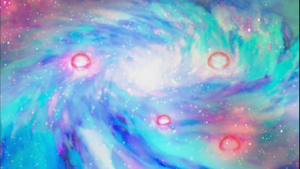 The attack on the Astral World.

A long row of trucks is driving over the highway, containing cleanup robots. All the machines are eventually taken to a building, inspected, and have their collected trash thrown in a big pit, and at a platform in the middle, a boy, says he wants to hear more screams, sending the waves of trash (burning into lethal bombs on the way down) into what appears to be the Astral World, followed by many screams (the screams themselves and his mention of wanting to hear more of them are cut from the dub). 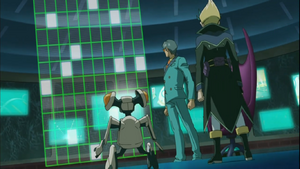 In Heartland, Kite enters a room, where a man is asking him how the Number hunting is going. Katio confirms it, and the man claims Kite's passionate Dueling will bring peace to Heartland, and asks how many "Numbers" Kite has collected up to now, which Orbital 7, the robot that's with Kite, shows revealing they've obtained eleven "Numbers" already, which the man is amazed by, saying "fantastic!". However, Kite seems to feel bad, as taking a "Number" from somebody with his Photon Hand also extracts a person's soul, but the man replies that they have no choice, and that all "Number" holders are evil anyway, so it doesn't matter. Kite asks if his little brother will return to normal after they collect all one-hundred "Number" cards. The man confirms it and says that if they don't get all "Number" cards, he won't be able get treatment for Hart's illness, but promises Kite he'll tell Dr. Faker about Kite's passionate heart, after which Kite and Orbital 7 leave. Dr. Faker calls right after Kite leaves, informing him of the gathering of the "Numbers", and the man replies everything is humbly going according to plan. Faker replies that he expected a messenger from Astral World would come.

At Yuma's house, in the meantime, Yuma's sister questions Yuma how and why he suddenly went to the scene of the crime. Yuma tells them not to worry about small things. Astral asks Yuma why he doesn't tell them about the "Numbers", to which Yuma replies that his sister still doesn't actually allow him to Duel. Hart Tenjo is shown to be looking out of a window, when Kite walks up to him, asking him how he is doing. Looking at the fair at the foot of the building they are in, Hart says he doesn't need their laughing voices, just their screams to calm him down, and asks his brother if he's weird. Kite tells him he isn't, and is just seeing a bad dream, which he will wake him up from.

Yuma thinks about what happened that day when Astral asks him what he will do, as someone other than themselves is collecting the "Number", and he will eventually come after them too. Yuma asks if he's scared, and states he will settle it in a Duel in that case. At school, Bronk tells Yuma, Tori, and Caswell that the neighboring city has built a new Duel plaza, and the group decides to go there next Sunday. On the way back from the Duel plaza, Yuma and Tori discuss Yuma's last Duel, which he lost, after which Yuma rehearses his Kattobingu. Astral appears from his key, and tells Yuma to be cautious as he has a bad feeling. It starts to rain, and the two begin to run. Yuma runs across the road, and stops to wait for Tori, who is about to get hit by a truck. In response, Yuma runs towards her and pushes her away, only to find that he will get hit himself. 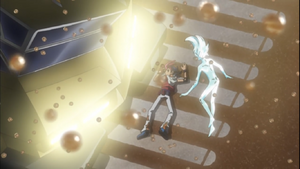 The truck stops before hitting Yuma.

Yuma opens his eyes, as Astral calls him. He didn't get run over by the truck, as it stopped. In fact, everything stopped, even the rain is stuck in place. Yuma gets up, and notices Tori is safe from the truck's range. Suddenly, they hear the whistle that they heard in the mall, and Kite Tenjo appears in front of them. He screams, swatting all paralyzed raindrops at Yuma, who in turn asks Kite who he is. Kite says the area is now surrounded by a special field, and time is arranged 1:10,000. Orbital 7 claims it is his power doing this. Kite tells Yuma that only people with "Numbers" can move in this space, and says that, as he thought, Yuma owns Numbers. Yuma and Astral are shocked by the fact that they are now eye-to-eye with the Numbers Hunter, and Astral tells Yuma to run away. However, using a so-called Duel Anchor, Kite traps Yuma to prevent him from running, and after explaining what he just did, Kite forces to Yuma to start the Duel with him. Astral tells Yuma to allow the two to work together, as this will be their toughest enemy yet, while he thinks he may have met Kite before. Although he says to not have believed in intuition at first, Astral declares Kite is different, and Yuma cannot defeat him alone. Yuma says that if that is all true, he will surely fight Kite. 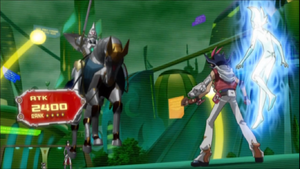 Both perform their Dueling rituals, Yuma readies his Duel Disk and Duel Gazer while Kite undergoes Photon Transformation and Orbital 7 shoots out Kite's Duel Disk, and a certain tattoo forms around Kite's eye, resembling a Duel Gazer, which changes his eye from blue to red. Kite takes the first turn, activates "Photon Veil" to return 3 LIGHT monsters to his Deck, to add 3 "Daybreakers" to his hand, returning the cards "Shining Angel", "Goddess with the Third Eye", and a "Daybreaker". Then he plays the Quick-Play Spell Card "Photon Lead", allowing him to Special Summon one of the LIGHT monsters he just added to his hand. 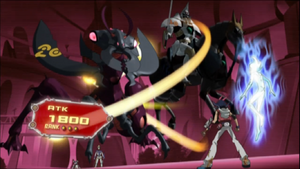 Using the effect of the Special Summoned "Daybreaker", he manages to get three of them on the field and overlay them to Xyz Summon "Number 10: Illumiknight". Using its effect, Kite detaches one of its Overlay Units and sends a card from his hand to the Graveyard to draw a card. He then Special Summons the "Lightserpent" he sent to his Graveyard using its own effect. Then, he Normal Summons "Plasma Ball". Kite then overlays these two Level 3 monsters to Xyz Summon "Number 20: Giga-Brilliant", leaving Yuma and Astral both stunned, amazed by how many monsters Kite had Summoned during his first turn. Kite smiles saying that the true hunt begins.

4/1700/0) in Attack Position (as it's a Level 4 or lower LIGHT monster that was added to his hand this turn). As "Daybreaker" was Special Summoned, Kite activates its effect to Special Summon a second copy (

4/1700/0) from his hand in Attack Position. The second copy's effect activates and Kite Special Summons a third copy (