"A Team Performance", known as "World Duel Carnival's Kickoff! Blazing Striker, Kakeru Kunitachi" in the Japanese version, is the twenty-seventh episode of the Yu-Gi-Oh! ZEXAL anime. It first aired in Japan on October 17, 2011, and aired in the United States on September 1, 2012.

Yuma's first opponent in the World Duel Carnival is the soccer kid, Striker. Striker transforms the surrounding stadium with his Field Spell Card, as the Duel kicks off. With his "Offside Trap", Striker brilliantly seals Yuma's strategies, while his teammate monsters use teamwork to frantically keep beating Yuma up with a combo of offense and defense and with such sheer strength, it seems as if Striker's victory is all but decided...

The soccer Duelist saying that the soccer ball chosen Yuma for their duel and kicks the ball up saying he has skills for kicking it. Yuma asks if there are cards on the soccer ball, so he tells him to put up his Heart Piece. Yuma introduces himself and the soccer player says his name is Striker which Caswell is surprised that his name is Striker because he heard it before. Yuma and Striker puts on their D-Pads and Duel Gazers as they start the Duel. 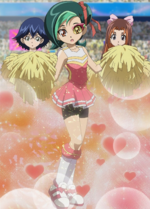 "Stadium of Dreams" takes effect on not only the Duel, but those watching it.

Yuma starts first and Sets "Gogogo Golem" in Defense Position. Astral explains the effect of "Gogogo Golem" and says that he thought that Yuma is stupid enough to place him in Attack Position which angers Yuma. Striker draws and plays the Field Spell Card; "Stadium of Dreams", changing the scenery to a soccer stadium, everyone's clothing is changed to soccer and cheerleader uniforms. Caswell and Cathy are commentators, while AR versions of Summer and Jen appear behind Tori (acting as additional cheerleaders). Yuma is surprised of the Field Spell, as "Stadium of Dreams" flips all face-down Defense mode monsters face-up. As "Gogogo Golem" is flipped Face-up, he is wearing a soccer uniform.

Next Striker summons "Wing Captain" in Attack Mode and attacks "Gogogo Golem". Yuma says he has more DEF points than the ATK points of "Wing Captain" which Striker activates a Spell Card called "Perfect Pass" which doubles the trouble (doubles the ATK points to 2200) because "Gogogo Golem" has more DEF points but Yuma says that "Gogogo Golem" cannot be Destroyed in Battle once per turn if he is in Defense Position but Striker says "Perfect Pass" negates his ability to be indestructible in battle once which destroys him. A soccer ball aims at Yuma and tries to save it only to fail. Yuma lost LP which he says it's unfair because he isn't supposed to take damage because his monster is defending him but Striker says that "Wing Captain" does Piercing damage and Sets a card, Yuma's friends are cheering for Yuma which he is proud of.

Yuma draws "Gagaga Magician" and summons him (with his soccer uniform) and attacks, Caswell says that "Gagaga Magician" has more ATK than Wing Captain who has his ATK back to 1100 but he ends up getting an offside. Astral says he smells a Trap Card and Yuma says it stinks too because Striker activated "Offside Trap" which negates the goal (battle damage) and his monster isn't destroyed and ends his turn much to Yuma's dismay. Astral has observation #15 which angers Yuma because that observation is an insult to Yuma, then Striker mocks his gameplay and summon "Top Scorer". Astral and Yuma say that's is ought to be illegal because he need to Tribute a monster because "Top Scorer" is a Level 5 monster but Striker says that if the has "Stadium of Dreams" card in play, he doesn't need to sacrifice anything. He then attacks "Gagaga Magician" and then attacks directly with which he now has 1700 LP. He then activates "Eye Contact" which lets him add "Offside Trap" to his hand and sets it.

Astral thinks it's seems to be hopeless and Yuma angrily replies "So that's your advice, things are hopeless thanks a ton coach, way to bring my confidence here!" Striker continues to trash talk him but then, his brothers came in which surprises everyone and Caswell says that they play for Heartland United. Cathy asks why are they here and he tells her that he knows Striker because he is related to them and won more championships than any other teams. Yuma then asks why he is in a Duel tournament and he replies that he isn't anything like his father or his brothers. He also says he hates teamwork. Yuma says that dueling is about teamwork and says that his monsters are his teammates and says all of his cards are a team. Astral says he has a plan to win, teamwork. 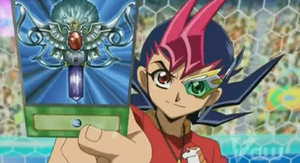 Striker says that he never believes in teamwork because his thinks his teammates are slackers so he decides to win on his own only to lose which the other team makes fun of him for being a bad player but when his teammates help him, he yells at them for being slackers but his brothers are mad at him and tells him he has no business here. So he quits soccer and start trying to prove them wrong but Yuma tells him he's wrong and tells him he still has some passion for soccer which makes him wonder if he is still into it.

He draws and summons "Defending Sweeper" in Attack Position and it level increases by 1 because he has "Stadium of Dreams" on the field and then plays "All For One". Astral says that he can play that if he has 2 monsters with the same type and level and can Special Summon a monster from the Graveyard with the same type. Striker revives "Wing Captain" and he says he also gains a level. Yuma realizes he can Xyz Summon, Striker overlays his 3 Level 5 monsters and builds the Overlay Network to Xyz Summon "Playmaker" in Attack Mode. Cathy is shocked that "Playmaker" has 2600 ATK points and Caswell says that that's enough to get Yuma disqualified from the World Duel Carnival. 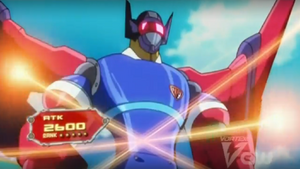 Striker then attacks "Zubaba Buster" with "Playmaker" but Yuma activates "Half Unbreak" which cuts the damage in half and saves his monsters from being destroyed. Striker detaches an Xyz Material to Attack again but this time, he attacks "Gogogo Golem" but Yuma reminds him he can survive 1 attack per turn. He detaches another Xyz Material to attack again which destroys "Gogogo Golem" and detaches his last Xyz Material to attack "Zubaba Buster" but "Half Unbreak" protects him but his LP are now 100. Tori asks if Yuma's okay but Yuma says he's feeling great because he's winning. Striker says that he has 100 LP left but Yuma says that if he believes in his teammates, then he is winning which makes Striker smile.

Yuma draws and summons "Gagaga Girl" (with her cheerleader uniform) but Striker says that she doesn't have enough ATK points to beat Playmaker but realizes that she and "Zubaba Buster" are both Level 3 monsters which means he can Xyz Summon. Yuma overlays "Gagaga Girl" and "Zubaba Buster" to Xyz Summon "Muzurhythm the String Djinn". He activates "Giant Hunter" and equips it to "Muzurhythm", which disables Striker's Spell and Trap cards during this turn only. Yuma says that if a monster equipped with "Giant Hunter" attacks another monster, that monster loses half of its ATK if Yuma has lower LP. Yuma attacks "Playmaker" with "Muzurhythm", then detaches an Overlay Unit to double the ATK of "Muzurhythm", destroying "Playmaker". This reduces Striker's LP to 0.

Everyone is happy that Yuma won, as the Augmented Reality vision disappears, everyone is back to their own clothes and Augmented Reality cheerleaders behind Tori disappear too. Striker learns that he's still into soccer and he also learns about the meaning of teamwork. His brothers are proud that he learned about teamwork and welcomes him back to the team. He agrees and won't forget what he learned. Yuma handshakes Striker and during the handshake, he gave a Heart Piece to him which gives Yuma his second Heart Piece.

4/1800/1500) into face-up Defense Position due to the first effect of "Stadium of Dreams". He then Normal Summons "Wing Captain" (

4/1500/1000) in Attack Position. "Gagaga Magician" attacks and destroys "Wing Captain". As Striker has no other cards in his Spell & Trap Zone and "Wing Captain" was destroyed in battle, Striker activates his face-down "Offside Trap" to revive "Wing Captain" (

"Zubaba Buster" on the field.

3/1000/800) in Attack Position. He then overlays "Zubaba Buster" and "Gagaga Girl" in order to Xyz Summon "Muzurhythm the String Djinn" ( 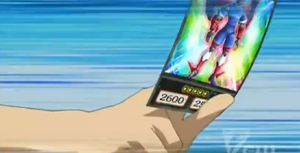 The Rank stars are centered.