"Crestfallen", known as "The End of a Fierce Fight! Hope Ray vs. Atlantal" in the Japanese version, is the forty-ninth episode of the Yu-Gi-Oh! ZEXAL anime. It first aired in Japan on March 26, 2012, and in the United States on February 16, 2013.

The Duel between Yuma and Trey comes to an end as in order to stop "Atlandis", Trey cooperates with Yuma in order to bring Astral back. Once that occurs, the power of ZEXAL is used once more in order to Summon "ZW - Phoenix Bow" and defeat "Atlandis".

The Duel between Trey and Yuma continues. Although Yuma is at a great disadvantage, he says he will continue, promising that he will not let Astral's sacrifice go to waste. He uses the last of Astral's power to Summon "Number C39: Utopia Ray". He is sure that with this power he can bring back Trey's old self. He activates the effect of "Overlay Eater" from his Graveyard, allowing him to take the last Overlay Unit from "Number 6: Chronomaly Atlandis" and attach it to "Utopia Ray". Then he activates the effect of "Utopia Ray" three times to increase its ATK to 4000 and decrease the ATK of "Atlandis" to 2000. Trey wonders how Yuma is still able to fight back, even without Astral helping him, but Yuma simply responds that Astral still exists in his heart, where he is still giving Yuma strength. He attacks "Atlandis", but Trey activates his Set Trap "Thunder Pot", negating the attack and ending the Battle Phase. Yuma, who still won't give up, Sets one card and ends his turn. The ATK of "Utopia Ray" and "Atlandis" return to normal.

As Trey is about to draw, he suddenly feels great pain. He remembers how Vetrix told him that his body and his mind have to go through this pain in order to control "Atlandis", but Trey responded that he will not mind. After remembering this he shouts that he will definitely meet Vetrix's expectations. He draws, but because of the effect of "Atlandis" he and Yuma both lose half of their Life Points. Because of the effect's blast, Trey's helmet falls off, revealing his face which is almost completely covered by his glowing Crest. 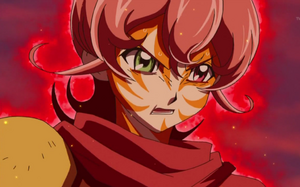 Trey's power begins to to overwhelm him.

Trey screams out in pain. Yuma runs to him, but Trey refuses his aid. He explains that this is the price for the power he obtained, but he also still wants to protect his family even if his own body might fail. Trey attacks "Utopia Ray" with "Atlandis", but Yuma activates "Battle Break", which would negate the attack and destroy the attacking monster. As Trey is about to activate his Set Trap, he remembers what Vetrix told him about that card, "Final Prophecy". He said that it a very powerful card and that Trey might not survive if he uses it. Despite the risk, Trey activates the Trap. It destroys "Number 33: Chronomaly Machu Mech", which was equipped to "Atlandis" and negates the effect of Yuma's Trap. Yuma then activates another Trap, "Half Unbreak"", allowing him to survive with 50 Life Points left. This angers Trey, who suddenly feels even greater pain. Seeing Trey's current condition, Yuma wishes to end the Duel, telling him that they do not need to fight because they are friends. Trey repies that he does not need any friends. He also explains to Yuma that it is too late now, because "Final Prophecy" will inflict damage to Yuma equal to the ATK of "Machu Mech" his next Standby Phase. Suddenly, the sky fills with dark clouds and the whole area around them starts to disappear.

As the destruction continues, Trey realizes that he cannot control "Final Prophecy" even with the power of his Crest. Suddenly, the ground quakes, and Trey, Yuma, and his friends fall into another world. At Vetrix's headquarters, Quinton and Vetrix are on a balcony. Vetrix says that it seems like Trey used his card. Quinton is surprised and asks if Vetrix really gave that card to Trey, but Vetrix just laughs and says that "Final Prophecy" is a card which can open the door to the Barian World and cannot be stopped after its activation. Meanwhile Trey tells Yuma that they will be brought into another world but vows that he never wanted it to happen. He also asks Yuma if he could forgive him. Yuma, however, remains confident that if he wins the Duel, he can stop the destruction.

Then Yuma remembers Astral again and the miracle they performed together. Trey suggests using his Crest's power to return Astral. He adds that he might be consumed by its power, if he is not able to control it. Trey is also worried about what will happen to himself, but gives Yuma the power of his Crest. Then, in the Emperor's Key, Astral appears and meets Kazuma who tells him that his son needs him and Astral should go and help him. 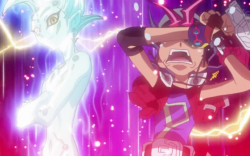 Kazuma disappears and Astral goes to Yuma, who weeps with joy and relief, but then Trey is pulled into "Atlandis". Immediately, Yuma and Astral overlay and perform a Shining Draw. They draw "ZW - Phoenix Bow". By this card's effect, they inflict 1000 damage to Trey and destroy "Atlandis", winning the Duel for Yuma. Because of this, they return to their world. Trey tells Yuma that he knows that he accepts him and is his first true friend. He also asks Yuma if he would save his family, because he is sure that Yuma is the only person that could do that. Then Trey disappears, leaving both of his "Number" cards and a Heart Piece allowing Yuma to enter the World Duel Carnival finals. 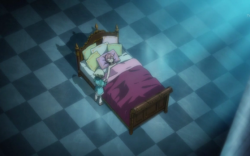 Later at Vetrix's headquarters, Trey lies in a bed and apologizes to Vetrix. Vetrix replies that it does not matter and Trey then asks if Vetrix could hold his hand. As Vetrix takes hold of his hand, Trey says that he is feeling tired and falls asleep right away. Vetrix swears to exact revenge on Yuma for the defeat. 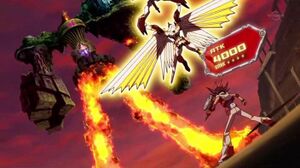 Turn 12: Yuma
At this point, Trey and Yuma use the power of Trey's Crest and the Emperor's Key to revive Astral. Yuma and Astral then perform a ZEXAL Morph with themselves. Yuma then performs a Shining Draw and gets "ZW - Phoenix Bow". He then equips "Phoenix Bow" to "Utopia Ray" from his hand via its own effect, increasing its ATK by 1100 ("Utopia Ray": 2500 → 3600 ATK). "Utopia Ray" attacks "Chronomaly Atlandis", Yuma then activates the second effect of "Phoenix Bow" to destroy "Chronomaly Atlandis", reduce the battle damage inflicted to 0, and inflict 1000 damage to Trey (Trey: 900 → 0 LP). 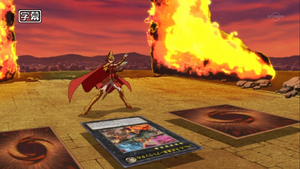