"No Tomato", known as "Yuma's Greatest Ordeal! Fight to the Death, Vegetable Death Match" in the Japanese version, is the thirtieth episode of the Yu-Gi-Oh! ZEXAL anime. It first aired in Japan on November 7, 2011, and aired in the United States on September 22, 2012.

Yuma fights against Tombo Tillbitty under the "Basket Rule".

Tombo Tillbitty Duels people, defeating them with his "Basket Rule" ("Vegetable Deathmatch" in the Japanese Version) and takes their Heart Pieces. Dextra and Nistro appear near one of the defeated Duelists. They see he has vegetables stuffed in his mouth, and Dextra sees blood on his shirt (in the dub, they assumed it's tomato juice). Dextra inspects closer, and licks it up, telling the disgusted Nistro it's just tomato. 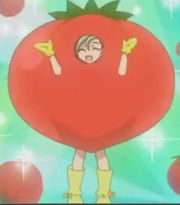 Yuma Tsukumo, accompanied by Astral and Tori Meadows, is eating his trademark riceball. Tori complains about his gulping, and Astral looks at Yuma in his usual serious way. Suddenly, a crow grabs the riceball from Yuma's hands and flies away. Yuma, hungry, falls down dramatically. Tombo Tillbitty kneels down to Yuma, offering him some vegetables (cucumbers) to eat.

Yuma openly enjoys eating them, and Tori takes a small bite, and tells Tombo she really likes it, who in turn turns all red and blushes. Yuma, happy to have had some food after all, pats Tombo on the shoulder, thanking him and introducing himself, but Tombo's still blushing. He nervously introduces himself. He tells Yuma and Tori about his dream of creating a tomato theme park in which everything is about tomatoes, Tomatotopia, and says he wants to make Tori the "image girl," who immediately, albeit quite shocked, think of herself lying between tomatoes in a commercial-like fashion. Astral makes his own interpretation, with Tori in a tomato costume saying she's a tomato girl (in the dub, Tori says "Welcome to Tomatotopia" and Tombo wants to make her a greeter).

Yuma, angered by the idea, says it definitely won't happen, and challenges Tombo to take a Heart Piece and make it harder for him to win the tournament and the wish. Tombo, albeit quite surprised by Yuma response, accepts, and performing his Dueling ritual, Yuma declares it's a Duel. Now their Duel has begun, Tombo takes one of the tons on his back of, puts a lid on it, and puts it next to Yuma, explaining the rules of his so-called Basket Rule. If a player declares battle, they have to eat a vegetable. They may grab 1 at random from the ton, and if they decide to eat it, they may attack. Yuma protests, but Dextra and Nistro appear, and after some questioning from all sides, they grant permission for the Basket Rule.

Tombo immediately activates a Field Spell Card, "Tomato Paradise". All of the surroundings turn into a fairy-tale-like land with tomatoes floating about. He Summons "Tomatoknight". Using his Field Spell, he can Summon a "Tomato Token". He then also activates "Tomatapult" hitting Yuma in the face with the token, for a rotten tomato-effect. Yuma Summons "Achacha Archer", uses its effect, but the vegetable he grabs is a special type of tomato (an "eggplant tomato"), which Yuma doesn't like, so he doesn't attack, which both Tori and Astral are surprised by, and Sets a card.

Yuma attempts a reversal with "Chachaka Archer," Summoned by Tributing the monster he took from Tombo, using "Blustering WInds". However, Yuma picks another special tomato (a "cucumber tomato"), and refuses to attack. Yuma finally admits that he hates tomatoes and quotes that they are disgusting. Tori and Astral become embarrassed because of Yuma's phobia. Tori also gets frustrated since she assumed Yuma was dueling to protect her from becoming Tombo's silly mascot. Tombo gets angry about Yuma's dislike of tomatoes. He take his turn, Summoning a new monster to Xyz Summon his "Tomato King." Consuming an Overlay Unit, the cute little monster becomes a huge monster with twice its attack, but what would be a finishing move from Tombo's side is deflected by Yuma's Trap Card. 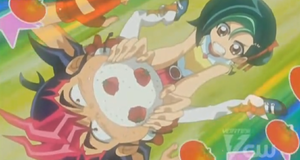 Yuma takes his turn, Summons "Gagaga Magician", and changes its Level to 3. Astral then informs him that in order to win the Duel, Yuma must eat a vegetable. Once again, Yuma picks a vegetable at random, and receives a "carrato" ("tomarrot" in the dub) which Tombo describes as a mix between a carrot and a tomato. When Yuma refuses to eat it, Tori says that if Yuma loses to Tombo, and the latter's wish comes true, the foods Tomatotopia makes will be tomato salad, tomato pizza, and tomato riceballs and she will force feed Yuma every single day. As a result, Yuma reluctantly eats the tomato in one bite, but ultimately likes it, much to his surprise and the happiness of Tori and Tombo. He goes on to overlay his "Gagaga" monsters to Xyz Summon his new Xyz Monster, "Melomelody the Brass Djinn", eating a tomato in the process and using "Gagaga Girl's" effect now that it was overlaid, lowering "Tomato King" to 0 ATK. Attacking, Yuma destroys the monster, and using "Melody's" effect, fully destroys it and Tombo's LP.

Yuma gains respect for Tombo and his wish.

Tombo and Yuma have a few finishing words, and Yuma gets a Heart Piece from him. Yuma states that if he hadn't had this duel with Tombo, he would never had liked tomatoes in the first place. The two bid farewell.

The Duel follows the Basket Rule, so each player must eat a vegetable before declaring an attack.

Tombo draws. He then activates "Tomato Paradise", which will allow either player to Special Summon a "Tomato Token" to their side of the field whenever they Summon a Plant-Type monster other than by the effect of "Tomato Paradise" itself. Tombo Normal Summons "Tomatoknight" (

1/0/0) in Attack Position. He then activates "Tomatapult", which will let him Tribute a Plant-Type monster and inflict 400 damage to Yuma. Tombo then activates the effect of "Tomatapult by Tributing "Tomato Token" (Yuma: 4000 → 3600 LP).

Tombo draws "Tomato in Tomato" and subsequently Normal Summons it (

1/0/0) in Defense Position. Tombo overlays his two "Tomato in Tomatos" and "Tomatoknight" in order to Xyz Summon "Tomato King" (

Tombo activates the effect of "Tomato King" to detach an Overlay Unit ("Tomato King": 3 → 2 ORU) and double its ATK until his next Standby Phase ("Tomato King": 1600 → 3200 ATK). "Tomato King" attacks and destroys "Chachaka Archer", but Yuma activates his face-down "Transaction Summon" to reduce the battle damage he would take by 500 (Yuma: 900 → 400 LP) and Special Summon "Gagaga Girl" (

3/1000/800) from his hand in Attack Position (as "Gagaga Girl" has 1000 or less ATK). However, monsters Tombo controls cannot be destroyed by battle until Tombo's next End Phase. 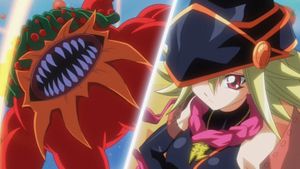 4 → 3). This time, Yuma eats a vegetable, allowing him to attack this turn. He overlays "Gagaga Magician" and "Gagaga Girl" in order to Xyz Summon "Melomelody the Brass Djinn" (