"Hunting Down the Hunter, Part 2", known as "Xyz Summon of Souls! ZEXAL" in the Japanese version, is the twenty-fourth episode of the Yu-Gi-Oh! ZEXAL anime. It first aired in Japan on September 19, 2011 and in the United States on May 19, 2012.

Despite being unable to fight against the immense power of "Galaxy-Eyes Photon Dragon", Astral, his resolve stern due to "kattobingu", continues a desperate combo. When he finally gives up against Kite who keeps attacking him over and over, Yuma appears and the mysterious power of ZEXAL activates...! 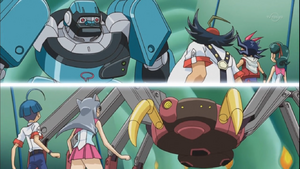 Yuma and his friends Tori, Bronk, Cathy, and Caswell are running through the hallways of Kite Tenjo and Orbital 7's secret lab. Behind the building's computer frame, Orbital 7 pushes a key on his keyboard, which makes two blocks of iron fall in front of and behind Yuma and his friends, which turn into a mechanical-gorilla and spider-like robots, those being Orbital 5 and Orbital 6 respectively. The two robots attack them, but they manage to dodge their attacks. Bronk and Tori tell Yuma to go on and find Astral, and Caswell starts throwing his shoes against the robots, and Cathy tells him to do cattobingu (a play on Yuma's kattobingu). Yuma thanks them and goes on his way.

Meanwhile, back in the world inside the Emperor's Key, Astral and Kite continue their Duel. Comparing their scores, Kite asks Astral what he'll do now, Sets a card, and ends his turn. Kite controls "Photon Leo" equipped with the "Photon Spear" Equip Spell Card, and Astral has "Gogogo Golem" on his side of the field. Astral draws, and thinks of Yuma. Yuma runs through the hallways of the building, encountering a huge closed door. Yuma starts pushing buttons at a computer next to it. Cathy and Caswell are running to escape the spider robot, Bronk and Tori are trying to hide from the gorilla, and Orbital gets stressed behind his computer. 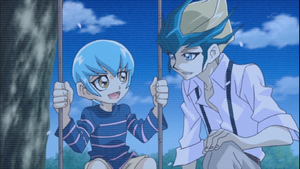 Kite with his brother Hart.

Inside the Key, Astral Normal Summons "Zubaba Knight". He discards "Decrease" to Special Summon "Acorno", and activates "Drop Exchange" to send both of his monsters to the Graveyard and Special Summon "Kagetokage" from his hand. Kite observes that Astral now has two Level 4 monsters and Astral overlays them and Xyz Summons "Number 39: Utopia" in Attack Position. While looking through the computer in a hurry, Yuma accidentally opens a picture of Kite next to his brother Hart Tenjo on a swing. Suddenly, his Deck Case starts glowing, and brings Yuma back to where The Door who he saw before Astral appeared is. It tells Yuma about "ZEXAL," and Yuma is returned. 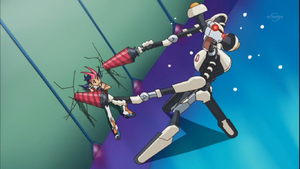 Astral declares battle with "Utopia," destroying "Photon Leo". However, it's returns when Kite uses "Armored Back" to revive it and its "Photon Spear". Astral thinks of "Galaxy-Eyes Photon Dragon" summoning conditions, which are closer to being completed now. Thinking of what just happened, the big locked door opens and Orbital 7 heads over to Yuma, who seems to be surprised by its small size. Orbital 7 transforms in the same way he did before Kite fought Shark, and attacks Yuma, who quickly runs away. He attacks Yuma, but his two drills get stuck in the wall right next to Yuma, and Orbital can't get them out.

Kite draws, drawing his "Galaxy-Eyes." He then Summons "Photon Circle". Astral is initially relieved, as "Photon Circle only has 1000 ATK - not enough for the summoning of "Galaxy-Eyes." Kite reveals that the monster equipped with "Photon Spear" can be treated as two Tributes, much to Astral's shock. He Tributes "Photon Leo" to Special Summon "Galaxy-Eyes", with "Photon Leo" being treated as two Tributes via the effect of "Photon Spear". Using "Photon Stream of Destruction", he attacks "Utopia," and uses the effect of "Galaxy-Eyes", which banishes it and the opponent's monster until the end of the Battle Phase. "Photon Circle" then attacks Astral directly, inflicting 1000 points of damage, so Astral's LP are at only 900. "Galaxy-Eyes" and "Utopia" return to the field, and since Utopia is an Xyz Monster that had Overlay Units on it, Galaxy-Eyes increases its ATK by 500 for each one lost, for a grand total of 4000. Using "Galaxy Storm", Kite attempts to destroy "Utopia" now that it has no Overlay Units, but Astral protects it with "Xyz Reflect", also inflicting 800 damage to Kite. 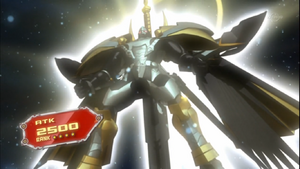 Astral draws, and then he performs Chaos Xyz Evolution to Summon "Number C39: Utopia Ray". Kite is shocked seeing the Numbers' alternate form and the fact that they have that kind of power, but he quickly recovers from this and states to Astral that his "Galaxy-Eyes" still has more ATK than Astral's "Utopia Ray". Astral however states that that is not his aim and proceeds to use "Utopia Ray"'s effect, consuming the single Overlay Unit on "Utopia Ray" to lower the ATK of "Photon Circle" by 1000 (making its ATK 0) and increase its own by 500 (to a total of 3000 ATK). The effect's activation turns "Utopia Ray" white, and Kaito looks at the 3000 to 0 calculation of 3000 points of damage to his own 2800. Using "Hope Sword Chaos Slash", "Ray" destroys "Circle." 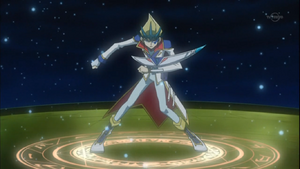 Kite protected by the effect of "Photon Circle".

The damage, however, is halved by the effect of "Circle", so Kite is not defeated. The ATK difference between "Galaxy Eyes" and "Utopia" is now 4000 to 2500. On Kite's turn, "Galaxy-Eyes" attacks again, but Astral counters with "Clean Barrier - Clear Force", reducing the ATK of "Galaxy-Eyes", so he only loses 500 LP. Astral starts fading, whispering Yuma's name. Yuma enters the computer chamber, and Astral sheds a tear. The Emperor's Key reacts, and bursts with light, breaking the glass that surrounded it. The Key moves to Yuma, and when Yuma holds it, he is sent back to The Door. The Door now opens, and Yuma can talk with Astral telepathically now. Yuma asks for his condition, and Astral tells him it isn't good.

After asking The Door about ZEXAL, Yuma runs through it, off the edge of the dark cliff, and becomes cloaked in the red light that also appears during an Xyz Summon. Astral cloaks himself too, and Yuma, saying he does "kattobingu", overlays himself with him. Kite, shocked, watches the light strike down on the structure. Yuma then materializes, wearing a red armor, the black part of his hair becoming golden, with the D-Gazer on his face. Yuma, startled, asks if this is him, and he hears Astral's voice, saying it is both of them together. Kite looks at them, startled. He quickly recovers from this, telling Yuma he only has 400 LP left. 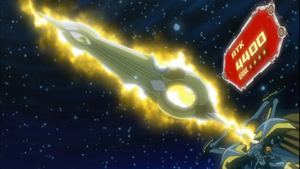 Yuma is startled by this, but Astral lets their hand shine, telling Yuma to win. They then perform a Shining Draw, drawing "ZW - Unicorn Spear". They then summon "Unicorn Spear" to the field and it replaces the sword wielded by "Utopia Ray" itself, in the form of a spear. Its ATK then increase by 1900, and its powers allow "Utopia Ray" to attack without the effect of "Galaxy-Eyes" activating as well as decreasing the ATK of "Galaxy-Eyes Photon Dragon" to its original value. "Utopia Ray" attacks with "ZEXAL weapon - Hope Slash" by throwing "Unicorn Spear" and crushing it into the body of "Galaxy-Eyes", but Kite uses "Photon Shock" to make both him and Yuma take the damage dealt in a battle involving a "Photon" monster. "Galaxy-Eyes" is destroyed by the attack, much to Kite's devastation (Kite screaming in anguish at "Galaxy-Eyes Photon Dragon" being destroyed is cut from the dub). Kite and Yuma are thrown backwards and both of their LP's are reduced to 0, ending the duel in a draw.

Yuma asks Kite why he collects the Numbers. Kite gives an unclear answer to them, saying that "he sold his soul to the devil for his little brother's sake"("The only way to save his little brother" in the English Dub), but then he releases Shark's soul, since Shark had no Numbers on him when his soul was taken. Shark at this point wakes up next to Mr. Kay, who had been taking care of him while he was in his comatose state. The computer in the building malfunctions, and Orbital panics. Yuma's friends gather in a hallway, deciding they have to leave, as the building is rumbling. 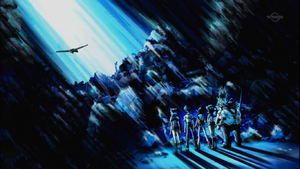 Tori doesn't want to leave without Yuma, but Bronk promises her he's fine, and the four escape from the building, which then explodes before their eyes. Tori and Cathy fall to their knees, Tori screaming Yuma's name in despair, but Yuma comes up from the ruined rests of the building. Tori gets angry at him for making them worry. Yuma jumps down and falls, but is okay. Yuma faces the other way, and Astral appears by his side, as they watch Kite Tenjo fly away with Orbital 7 in his glider form on his back.

1/200/400) from his hand in Attack Position via its own effect. Astral activates "Drop Exchange" to send "Zubaba Knight" and "Acorno" to the Graveyard and Special Summon "Kagetokage" (

4/1000/1000) in Attack Position. Kite explains that due to the second effect of "Photon Spear", "Photon Leo" counts as two Tributes. Kite then Tributes "Photon Leo" in order to Special Summon "Galaxy-Eyes" (

Kite then activates "Galaxy Storm" to destroy "Utopia" as it has no Overlay Units, but Astral activates his face-down "Xyz Reflect" to negate the effect of "Galaxy Storm" and inflict 800 damage to Kite as an Xyz Monster Astral controls was about to be destroyed by a card effect, (Kite: 3600 → 2800 LP).