"Double Jeopardy: Part 2", known as "Connect Hope! Hope Sword Mars Slash!!" in the Japanese version, is the thirty-eighth episode of the Yu-Gi-Oh! ZEXAL anime. It first aired in Japan on January 9, 2012, and in the United States on November 17, 2012.

The Duel between Yuma against Dextra and Nistro continues. Due to their combination, Yuma is pushed into a corner, even after Summoning "Utopia" thanks to Astral. However due to the bonds between the two, a reversal occurs!

Turn 6: Nistro
"Blade Bounzer" attacks "Gagaga Gardna", but Yuma activates the effect of the "Tasuke Knight" in his Graveyard, reviving it ( 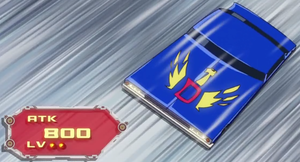 2/800/400) in Attack Position. Yuma activates the effect of "Cardcar D", Tributing it during the turn it is Summoned in order to draw two cards ("Double Tension" and "Double or Nothing!"), but preventing him from Special Summoning this turn. Yuma activates the effect of the "Overlay Eater" in his Graveyard, banishing it in order to attach an Overlay Unit from "Photon Strike Bounzer" ("Photon Strike Bounzer": 1 → 0 ORU) to "Utopia" ("Utopia": 0 → 1 ORU).

According to the Tag Duel rules used, as Nistro lost, Dextra is eliminated too and Yuma wins.