"The Countdown Begins", known as "Prelude toward Ruin - The Threat of the Sphere Field Cannon!" in the Japanese version, is the sixty-eighth episode of the Yu-Gi-Oh! ZEXAL anime. It first aired in Japan on August 20, 2012, and in the United States on July 6, 2013.

Dr. Faker, using the power of the "Numbers" plans to destroy the Astral World with the Sphere Field Cannon. As Yuma and Astral suffer inside the Sphere Field, Shark, Tori, Kite and Orbital 7 try to save them and Hart as well. They are, however, confronted by Mr. Heartland.

Still trapped in the Sphere Field, Yuma and Astral, using ZEXAL, are talked to by Dr. Faker, who laughs maniacally after he's done. As Yuma questions Faker's statements. However, they see they have been transported to another location; Heartland Tower. Following Dr. Faker's explanation of the location, the attack he saw after regaining a memory from a "Number" card suddenly makes sense to Astral. Faker then has all of the "Numbers" he took from them and Vetrix appear between them (in card form). At that moment, Kite and Orbital 7 enter Hart's room, only to realize he's not there. Faker explains to Yuma the purpose of the WDC; gathering a lot of "Number" cards for the Sphere Field Cannon as a power source. Kite's losing to Vetrix was not as planned, but since Vetrix took Kite's "Numbers" the effects was the same. Angered by all problems Faker has caused, Yuma tries to punch him, but Faker reveals his appearance in the Sphere Field is just a hologram. He then orders Hart, who's looking unresponsive and in trance, to do his job. 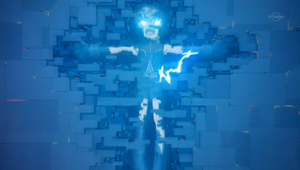 Kite has Orbital bring up a map of the tower, who tells him Hart is down around the Sphere Field, shocking Kite. On Faker's order, Hart floats into a gap in the wall, fitting his body, which then proceeds to put parts of the wall on him, activating his powers and seemingly causing him pain. Shocks are then released on him from the cables on the wall. Outside of the stadium, the spectators of the WDC Finals are being led to safety. Bronk, Flip, Cathy, and Caswell get outside, but notice Tori isn't with them. Yuma's sister, Kari then comes through the public riding her motorcycle. Elsewhere, Tori sees the explosions on Heartland Tower, worried for Yuma's safety.

Kite notices light coming from his Deck, seeing the "Neo Galaxy-Eyes Photon Dragon" card glow, a reaction to Hart using his powers. The building begins shaking all of a sudden, and the top of the tower breaks down, making the ceiling collapse on Kite. On the walls of the Heartland area, Kari is with Yuma's friends, trying to call Tori via the D-Gazer. She eventually picks up, telling her location, and then cuts the call immediately when she sees Kite trapped under a part of the collapsed ceiling. Shark comes running down a set of stairs, looking for Yuma. He comes across Tori and Orbital 7 trying to lift the boulder on Kite. Albeit surprised by his sudden appearance, Tori leaves the lifting of the boulder to him and they get Kite away from underneath the rubble.

Tori thanks Shark, who calmly says it's no problem. Kite tells them Hart is in trouble, to which Tori shakes Orbital 7 asking him where he is. He says it's the Sphere Field Cannon, and tries to explain it's purpose, before Shark cuts him off asking him where it is. Kite then tries to walk away ignoring Shark's question. The two get into a small argument, with Kite bringing up Shark's 4000 to 0 defeat at his hands some time before (this flashback is cut from the dub), with Shark saying that it won't happen again next time. Tori interrupts them, since it's not the time for an argument like that. Shark then explains his reason for coming; saving Yuma, which surprises Tori, and he angrily shouts at Orbital again to tell him where Yuma is, ticking Orbital off, who refuses to tell him. Tori then begs Kite to bring them with him, and Kite remembers the times Yuma was worried about Hart. He tells Orbital to come with him, and, keeping his cool, lets Tori and Shark come along.

Still trapped, Yuma is getting exhausted by being in the Sphere Field. Astral apologizes to him, saying it's all his fault since he wasn't strong enough. Yuma denies it, and says Hart needs saving more than he does right now. Kite, Tori, and Shark are in front of a door blocked by rubble, and Shark and Orbital get into a small argument again. Tori calls Kari to get a way through the building they can get through, which she gets. The three arrive in the room with the Sphere Field, but are blocked by Mr. Heartland, who's still on his floating platform, and they see Yuma suffering inside the Field. To prevent their advance, Heartland sends out several groups of Litterbots to dispatch them, and the Bots turn into combat forms and on Kite's command, Orbital does the same. Smashing several of the robots, and taking one each of their scythe-like weapons and arms respectively, Kite and Shark break more of them. When Tori breaks one too, Orbital comments on it, but Tori tells him off saying he should keep doing his best too. 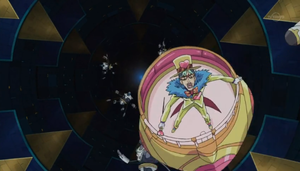 Mr. Heartland falling down the well.

Mr. Heartland then starts preaching to the three, provoking Kite, and opens a part in the center of the room, and has more robots come to attack the kids. He then says it's a gate to the Astral World, which the cannon will fire into. Kite looks at the suffering Hart, and Dr. Faker smiles happily in his room since 92% of the needed energy was already collected. The robots begin to overwhelm Shark, who once again ticks Orbital 7 off by telling him he should do more. Albeit angry, Orbital scans the room for a way to shut down the bots. Orbital finds a spot, and Kite orders him to hack into it. Using his "Orbital Step" the little robot does so, and manages to both malfunction the machinery in Dr. Faker's room as well as shut down the hostile robots, but the shocks he received from it seem to take their toll on him. As a result, the power drops and Mr. Heartland is sent down the well to the portal along with his platform. 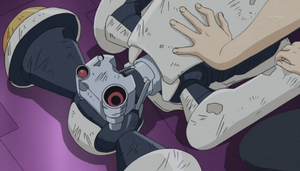 Tori holds Orbital in her arms, and despite not knowing it well, cries when it shuts down. Yuma instantly feels relieved when the power of the Sphere Field lowers, and is surprised to see his three rescuers. Astral then undoes ZEXAL, and frees "Number 39: Utopia" and "Number 32: Shark Drake" for Yuma to take with him, and mentions 'hope' and 'future'. He then tells Yuma to go and save Hart and the Astral World, sending Yuma out of the Sphere Field bubble. Tori and Shark are relieved to see Yuma, but before anyone can say anything, Faker appears from a door opening in the wall, sitting on a huge platform. 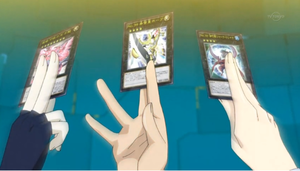 The ace cards of Kite, Yuma and Shark.

Yuma sees the "Numbers", "Utopia" and "Shark Drake" in his hand and remembers Astral's words, telling Shark and Kite he needs their power, citing Astral's words. Kite picks up his "Neo Galaxy-Eyes Photon Dragon" from his Deck, deciding to join Yuma. Shark accepts "Shark Drake" from Yuma, and the three strike a pose putting the three Xyz Monsters "Utopia", "Neo Galaxy-Eyes Photon Dragon", and "Shark Drake" together in the air, and Yuma challenges Dr. Faker, who gladly accepts their offer to take the two "Numbers" back from them. Tori then wishes for Yuma to be safe, preparing herself to watch the upcoming Duel.