From Yugipedia
Jump to: navigation, search
This article is about the archetype. For the set release code under a card's image, see Card Number. For the 8-digit number in the lower left corner of cards, see Passcode.

"Number" (Japanese: Nanbāzu, "Numbers") is an archetype of Xyz Monsters that are the focus of the story in the Yu-Gi-Oh! ZEXAL anime and manga series. Each "Number" monster has a corresponding natural number included at the start of its name after "Number" (and occasionally a letter, such as C), with the exceptions of "Number XX: Utopic Dark Infinity" (which is used by Eve in the Yu-Gi-Oh! ARC-V manga) and "Dragonic Utopia Ray" (which is only treated to be a "Number" monster).

"Number Wall" and "Numbers Overlay Boost" are not "Number" cards because they do not have 「」 in their Japanese names.

As stated by Satoshi Kuwabara, "Number" monsters are created "carefully with attention to details, so that fans can enjoy it in various places", which often results in puns and second meanings for each "Number".[2] Many of the "Numbers" are based on goroawase, a form of Japanese wordplay.

During Astral's battle against Don Thousand, fragments of Astral's power were scattered across Earth and designated the location of the Numeron Code. They took the form of 50 "Numbers", among them the seven Mythyrian "Numbers"[3] and the four "Numeron Gate" monsters.[4]

Blank "Numbers" encircling Yuma within a Sphere Field after being released

When Yuma Tsukumo unlocked the door with his Emperor's Key, he opened a portal between Astral World and his own, which allowed Astral to come into his world. Yuma found himself trapped within a sphere of blank cards, which shortly flew away.[5] Astral's remaining power and memories were scattered into 50 more "Number" cards. Astral cooperated with Yuma to regain his lost memories .[6] When Astral collected all of the cards, something else happened besides his memory recovery. Astral thought it'd cause something troublesome,[7] while Dr. Faker claims Astral will obtain a great power and use it for taking revenge on him.[8] It is later revealed that Astral will obtain the Numeron Code, which he was to use to annihilate Barian World in order to Rank-Up Astral World, but Yuma aborted this mission. However, Barian World's leaders, the Seven Barian Emperors, were also trying to collect the "Numbers." If all "Numbers" were collected, they would obtain the Numeron Code and use it to destroy Astral World.

Usually, "Numbers" are blank cards that take the form of something that whoever finds them desires the most, design themselves to fit their original owner's Decks and keep that form forever. Some Duelists may have more than one "Number" card that fit their Deck. Their card text is written in a strange alien language that only those who wield them can understand (in the dub, all "Numbers" appear normally like other cards seen with the exception of episode 2, in which "Number 39: Utopia" is blurred). When they are Summoned, their respective numbers are printed on their users, appearing in many places as the forehead, neck, left and right hands (in Cameron Clix's case, it appeared under his right eye and in Number 56's holder's case, it appeared on his left shoulder).

When Summoned, most "Numbers" initially appear in what design sheets refer to as their "neutral form/body",[9] often called a "sealed form" by fans. The "Number" then transforms into the creature depicted in the card's artwork through various means. "Number" monsters use a galaxy-like Overlay Network portal in contrast to regular Xyz Monsters, who use a red spiral portal.[5]

Astral stated that there are 99 "Numbers",[6][10][11] but according to Kite Tenjo there are 100 "Numbers".[12] As Astral had successfully retained 1 of the "Numbers", "Utopia", it is possible Astral was referring to the other 99 "Numbers". However, Dr. Faker believes that, aside from 99 "Numbers" which are Astral's pieces of memory, Astral himself is "the Original Number" (ナンバーズのオリジナル, Nanbāzu no Orijinaru).[8][13] Later Astral corrected himself, stating there are one hundred "Numbers".[14][15]

Astral absorbing memories from the cards

A "Number" monster is absorbed into Astral when a Duelist using it is defeated. The "Number" can then be used by any Duelist whom Astral is currently with. Each "Number" contains a piece of Astral's memory, which he recovers each time he absorbs one. After Astral absorbs a "Number", they are stored in a Different Dimension Airship within the Emperor's Key. Each has its own pillar within the structure, engraved with its number.

"Numbers" in the anime are dangerous cards as they can easily amplify the darkness and desires of their holder user, whether these causes were good[16] or bad. The "Number" monsters can also easily possess their holder with their power with the exception of Yuma's possession of the Emperor's Key, Kite Tenjo's Photon Transformation, and the Vetrix Family's crests. Some individuals can overcome the possession of a "Number", as demonstrated by Shark with his "Number 32: Shark Drake". However, the power of Photon Transformation and the crests seem to be limited, and has fatal consequences and being used to wield a "Number" card will drastically exhaust their user.[17][18]

When a Number holder has reached a high level of a certain emotion, "Chaos Numbers" start to appear. For example, Astral and Yuma obtained "Utopia Ray" after Astral was happy to know Yuma considered him a friend.[19] Reginald Kastle also obtained "Shark Drake Veiss" after his desire for revenge was amplified by "Shark Drake".[20]

In the Barian Invasion arc, "Numbers 10X" are introduced as the signature cards of the Seven Barian Emperors. Astral cannot absorb them, as they are not part of his memories.[21] They were later revealed to be created by Don Thousand as a means to release himself from his prison and restore his power.

Later on, the Mythyrian "Numbers" were introduced by Vector and Don Thousand that are located in ruins across the world, protected by guardians. Each of these "Numbers" corresponds to a legend inscribed on the walls of the ruins, telling the story of the person who occupied that location in a previous era, before they became ruins due to the ravages of time.[22] Rather than take their form based on their holder's Deck, they take a form relative to the legend that is described.

What sets "Numbers" apart from other Xyz Monsters in the anime is that they can only be destroyed by battle by another "Number",[6] though this is a card effect and thus can be negated.[11] In the TCG/OCG, "Number Wall" provides this protection instead.

"Numbers" are the result of great power being sealed into a card, as demonstrated by Yuma's "Number F0: Utopia Future", which was created through Yuma's power to believe in others. As a result, "Numbers" possess powers far beyond that of ordinary Xyz Monsters. 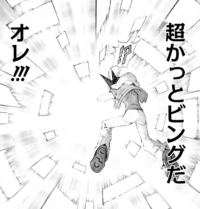 In the Yu-Gi-Oh! ZEXAL manga, "Numbers" are held under the diabolical door along with Astral. As Yuma finally opens the door during his Duel with Shark, a huge light appears and numerous blank cards flow out of the door in every direction. Astral stated that "Numbers" are fragments of his memories, and that he shall collect all "Numbers" in order to retrieve his memories. Also, he says "Numbers" battle to absorb each other so, if he and Yuma lose, he will disappear. When Astral obtained a memory piece from "Number 17: Leviathan Dragon", he said his memory is divided into 100 "Number" cards.[25] This amount of number is later confirmed by both Kaito Tenjo[26] and Mr. Heartland.[27]

Various "Numbers" along with Luna

Like in the anime, "Numbers" are blank cards that take the form of something that whoever finds them desires the most, design themselves to fit their original owner's Decks and keep that form forever. Some Duelists may have more than one "Number" card that fit their Deck. What sets "Numbers" apart from other Xyz Monsters in the manga is that they can only be destroyed by battle by another "Number",[6] though this is a card effect and thus can be negated.[11] In the TCG/OCG, "Number Wall" provides this protection instead. However, Kyoji Yagumo has shown an unique ability of manipulation with the "Numbers": Molding them according to his needs since he claims not to have any desires .[28]

Yuma believes the power of the "Numbers" are not evil and that if a good person had them, it would be okay.[29] According to Luna, "Numbers" are mirrors that reflect the hearts of the people. For example, when Shark had "Leviathan Dragon", his heart was full of darkness and then dominated, but Yuma and Astral freed him from that darkness, which made him able to possess a "Number" without falling under its power.[30] Luna believes that the very fact that "Numbers" can be good or evil means they should not exist, as people will fight over them regardless.

It seems that just like how a "Number" takes form after their holder, their powers do so as well. The powers a "Number" can possess is made clear in the manga; while "Number 63: Shamoji Soldier" helped its unsuccessful holder on his restaurant,[29] "Number 13: Cain's Doom" and "Number 31: Abel's Doom" are dangerous "Numbers" who inflict real damage to people and can even put their lives in danger.[31]

It was also shown that "Numbers" can evolve into Shining Numbers, as seen when Yuma evolved "Number 39: Utopia" into "Number S39: Utopia Prime".[32]

Each of these cards is stated to contain parts of Astral's memories. After Nash's defeat and the conclusion of the war with Barian World, Astral came into possession of all one-hundred "Numbers".

Mythyrian "Numbers" are a group of special "Number" cards that are located in ruins. They are still part of the original 100 "Numbers" of the Emperor's Key.

"Number 10X" (read as Over-Hundred Numbers) are the signature "Number" cards of the Seven Barian Emperors, whose numbering go over the limit of 100. They were created by Don Thousand to suppress the Emperors' memories of their past lives as humans.

"Number C" (read as Chaos Number) are upgraded versions of the base "Number", which are Summoned by overlaying their base counterpart through Chaos Xyz Evolution, "Rank-Up-Magic" cards, "Chaos Field", and "Don Thousand's Throne".

"Number C10X" (read as Chaos Over-Hundred Numbers) are upgraded versions of the base "Number 10X, which are Summoned by "Rank-Up-Magic Barian's Force" or "Rank-Up-Magic - The Seventh One", using their base form (Number 10X) as Material.

"Number S" (read as Shining Number) are upgraded versions of the base "Number", which are Summoned by overlaying their base counterpart through Shining Xyz Evolution. This evolution only exists in the manga, and can be considered the manga's counterpart of Chaos Xyz Evolution.

These are "Number" monsters that are upgraded versions of regular "Number" monsters. Unlike other upgraded forms, the "Numbers" don't have a prefix ("C" and "S"). They are Summoned using the effect of "Rank-Up-Magic Astral Force".

These are "Number" monsters that do not fall into any of the previous categories.

These "Numbers" are the creation of Don Thousand and a different series aside from the originals, some of which were contained in the Fusionizers.

These "Numbers" are born from Yuma's own power and belief in the future. "Number F0: Utopic Future" first appeared during his final Duel with Astral.

This "Number" is used by Eve during her Duel with Yuya Sakaki. Yuya recognizes it as a "Number", calling it a "legend-class Duel Monster". The two "X" symbols are Barian glyphs, suggesting this monster comes from Barian World.