"Messenger from the Moon!!" (からの!! Tsuki Kara no Shisha!!) is the nineteenth chapter of the Yu-Gi-Oh! ZEXAL manga.

A mysterious girl approaches Shark, entrusting him a dangerous mission.

The hooded person who followed Shark reveals herself as Luna, and says that Shark can call her a messenger from the moon. Shark replies that she looks like something straight out of a fairy-tale, not that he hates them. Luna says that she doesn't have a quarrel with him, but she must face him. They then begin a Duel, a crescent-shaped Duel Gazer tattoo appearing over Luna's left eye.

Shark takes the first attack, drawing a card and Summoning "Right-Hand Shark," then Special Summoning "Left-Hand Shark," explaining that he can Special Summon "Left-Hand Shark" from the hand or Graveyard when "Right-Hand Shark" is on the field. He can't attack on the first turn, so he Sets two cards to end his turn. Luna remarks on his two monsters, asking if Shark really thinks that's good enough to stop her. Shark grins, telling her to yip all she wants. Luna begins her turn, activating the Field Spell Card "Level Denial." As long as it's in play, monsters with Levels cannot attack. She then Summons "Moon Magician," and then Special Summons "Moon Gardna" since Shark has at least two monsters on his field. Shark grimly notes the two Level 4 monsters, and Luna overlays them, creating an Overlay Network to Xyz Summon "Kachi Kochi Dragon." She attacks "Right-Hand Shark," and "Kachi Kochi Dragon's" "Pulverize" attack creates an eruption of stone spikes, reducing Shark to 3400 Life Points. Luna then activates "Kachi Kochi Dragon's" effect, expending an Overlay Unit to attack again since it destroyed an enemy monster. Stone spikes erupt from the ground and destroy "Left-Hand Shark," and Shark shields himself from the backlash as his Life Points are reduced to 2600. Luna Sets a card and ends her turn. She asks Shark what's wrong. She'd heard he rips his opponents to pieces once he gets his teeth into them. Apparently, she was misinformed.

Shark explains that "Bahamut Shark's" effect allows him to use an Overlay Unit to Xyz Summon an Xyz Monster of a Rank below that of "Bahamut Shark." He Xyz Summons the Rank 3 "Black Ray Lancer", much to Luna's shock. Then, Shark activates a Spell Card, "Chain Summon," since he Special Summoned more than one Xyz Monster in a row, he can Special Summon an Xyz Monster of a lower Rank than the others, calling out the Rank 2 "Cat Shark." Luna is shocked that Shark has Summoned 3 Xyz Monsters at once. Shark replies that he told her that he was ready to take her down, activating a Trap Card, "Xyz Drop," attaching it to his "Cat Shark." Luna responds with her own Trap Card, "Rank Drop," destroying all monsters with Ranks on her opponent's field. Shark smiles; he thought so. That's why Luna made him focus on Summoning Xyz Monsters. He activates a Counter Trap Card "Seven Tools of the Bandit," paying 1000 Life Points to negate Luna's trap and destroy it, reducing his Life Points to 1600. Then he uses an Overlay Unit to activate his "Cat Shark's" effect, doubling the ATK of all Rank 4 Xyz Monsters for the rest of the turn. Defenseless, Luna can only growl in frustration as Shark's monsters destroy her "Kachi Kochi Dragon" and wipe out her Life Points, and she screams as she's thrown through the air. 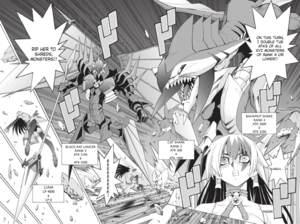 Removing his Duel Gazer, Shark asks Luna if she is alright; she admits that he truly deserves the nickname "Shark" and she is impressed that Shark could Summon 3 Xyz Monsters at once during the Duel, and says that she wasn't wrong. Luna reveals she is a Numbers Hunter whose goal is to eliminate the "Numbers", and says that Shark is the only one who can stop Dr. Faker, and for that he needs the power to do so - a "Number". Shark angrily declines, saying that he was already once possessed by a "Number", and that he cannot do so. However, Luna replies that he knows how terrifying a "Number" can be, and that this is just why it would be okay. She further explains that "Numbers" are mirrors that reflect the hearts of the people, and at that time, his heart was full of darkness, but Yuma and Astral freed him from that darkness. She then gives Shark a mysterious card, and says that that's a new power to protect him. 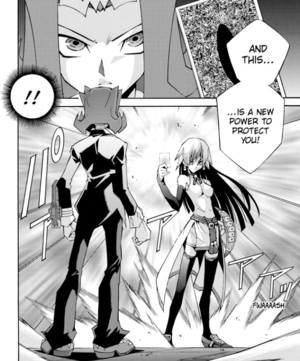 Later, Yuma and the members of the Numbers Club gather in Cathy's house. Everyone is impressed at her mansion. Astral comments that it is much better than Yuma's house. Cathy then tells Yuma that if he marries her, all that would be his, and Kotori doesn't believe she said that and yells at her. Cathy apologies with Cologne, and tells her that she can live there if she wants to. However, she just turns around and says that she likes Yuma's house better, and that she prefers love to money. Tetsuo then asks Cathy what she wanted to show them. She then presses a cat paw-like button, which opens a door leading to a big room, with many researchers and big computers. Cathy explains that as an apology for the trouble she caused, the Numbers Club's headquarters would be established there, where they can look up mysterious phenomenons happening throughout the world, and therefore, locate the "Numbers". While the guys get amazed on the technology and say how Cathy is really put into it, Kotori sarcastically says Cathy is letting her money do the talking, while she replies saying asking if Kotori could do that. Yuma says that finding the "Numbers" is not a game, to which Astral replies saying that yet it was heartening, and advising Yuma to tell the others about the previous day. 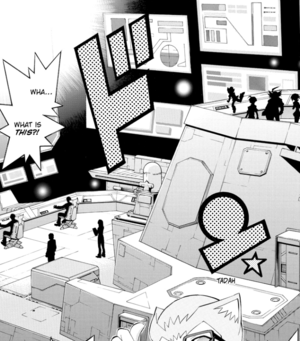 Yuma then tells them that Astral told him that now he got three "Numbers", some of his memories have returned. Yuma asked what he remember, and Astral says his enemy is Dr. Faker, who plans on using the hidden powers of the "Numbers" to destroy the Astral World; However, it is linked to this world. So, if the Astral World dies, this one will die as well. Kotori asks if that's for real, and Yuma answers saying that Astral doesn't lie - in fact, he can't lie. Cathy asks what is that hidden power of the "Numbers", but Astral hasn't regained that much memory yet. Takashi asks if Dr. Faker knows both worlds are connected, and Cologne says that he brought her to life, but that he is a really scary scientist, and that she wouldn't put it past him. Takashi and Tokunosuke get scared as knows about that fact but still wants to destroy the Astral World, and that a man like that is collecting the "Numbers". Yuma says that they have to get the "Numbers" first to stop Dr. Faker's plans, and Tetsuo then deduces the fate of the world is riding on this. Then, everyone, (except for Tokunosuke, who ends up getting peer pressured into it), gets spirited up and say that they will keep on collecting the "Numbers", and that the Numbers Club will protect the world. Astral then says to himself that thanks to Yuma, it looks as though his destiny is on the move.

Turn 3: Shark
Shark Special Summons "Right-Hand Shark" from his Graveyard as he controls no monsters. Next, he Special Summons "Left-Hand Shark" from his Graveyard as he controls "Right-Hand Shark", increasing its Level by 1 via its other effect. Shark overlays his two monsters to Xyz Summon "Bahamut Shark" (2600/2100). He activates its effect, detaching an Overlay Unit to Special Summon "Black Ray Lancer" (2100/600) from his Extra Deck. Finally, he activates the Spell Card "Chain Summon", which, as Shark Xyz Summoned 2 Xyz Monsters this turn, Special Summons "Cat Shark" (500/500) from his Extra Deck. Shark activates his face-down "Xyz Drop", attaching itself to "Cat Shark" as an Overlay Unit. Luna activates her face-down "Rank Drop" to destroy all monsters Shark controls that have a Rank, but Shark chains with "Seven Tools of the Bandit", paying 1000 Life Points to negate "Rank Drop" (Shark 2600 → 1600). He activates the effect of "Cat Shark", detaching an Overlay Unit to double the ATK of all Rank 4 or lower Xyz Monsters he controls until the End Phase ("Bahamut Shark" 2600 → 5200, "Black Ray Lancer" 2100 → 4200, "Cat Shark" 500 → 1000). Shark attacks and destroys "Kachi Kochi Dragon" with "Bahamut Shark" and attacks directly with "Black Ray Lancer" and "Cat Shark" (Luna 4000 → 0).