"The Numbers War!!", titled "Numbers War!!" (ナンバーズ大戦！！ Nanbāzu Taisen!!) in the Japanese version, is the twenty-forth chapter of the Yu-Gi-Oh! ZEXAL manga.

As the Duel between Yuma and Eviluder is settled, Kyoji Yagumo appears.

"No. 42: Starship Galaxy Tomahawk" destroys "No. 22: Zombiestein" with its Tomahawk Cannon. Yuma laments the destruction of "Zombiestein", as he thinks of Tetsuo. Eviluder tells Yuma that he is going to wipe out his forces on the next turn, and that he will end up just like "that other Duelist" (Tetsuo). The gang from the Numbers Club are worried on how Eviluder took both "Utopia" and "Zombiestein" out, and on the fact that if Yuma takes a next attack, he's done for. 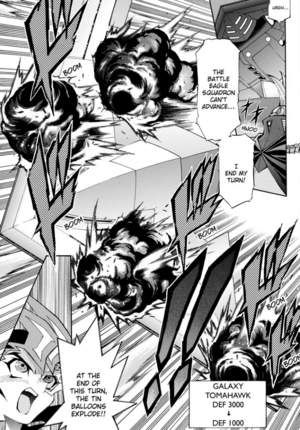 Astral comments to Yuma that he thought that Tetsuo's Deck could hold the key to an anti-"Numbers" strategy. Yuma asks Astral if he was watching for one, and Astral confirms, explaining that when Tetsuo gave his cards to them, he suspected that he had found a way to defeat Eviluder. Yuma smiles, and says to himself that Tetsuo have been looking out for him. However, Astral says it's too soon to relax - they survived this turn, but he doesn't see victory in the cards Yuma currently holds. Yuma says that he knows, that they put their best into his Deck, and that that draw would decide their fate. Yuma mentally asks Tetsuo to help him out there, as his image appears behind Yuma. Yuma then draws "Monster Reborn", together with Tetsuo's spirit. Yuma mentally tells Tetsuo that he read him loud and clear, as Astral says now they can win. 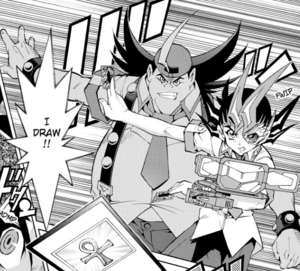 Yuma activates "Monster Reborn", reviving "Utopia". He then equips him with "Double Buster Swords", allowing him to attack twice and inflict piercing battle damage this turn. Eviluder is shocked, as Yuma declares the first attack, saying that one is because Eviluder ticked him off. "Utopia" destroys "Starship Galaxy Tomahawk" with his Hope Sword Slash, reducing Eviluder's Life Points to 2500. Astral says they are not done yet - "Utopia" still has an attack left. Yuma then declares the second attack, saying that one is for Tetsuo. With "Utopia"'s Hope Sword Double Slash, Eviluder's Life Points are reduced to 0.

Kotori celebrates Yuma's win, and Takashi says Yuma totally got revenge for Tetsuo. Astral absorbs Eviluder's "Number", as Yuma smiles and mentally tells Tetsuo that they did it. Eviluder stands up, saying he can't believe his invincible fleet lost, when someone tells him that the operation has failed - and the responsibility is his. That person is Kyoji Yagumo, who Eviluder calls "Supreme Commander Yagumo". Shark, Luna and Kaito are all shocked at Yagumo's appearance. Yuma notes Yagumo "floating" up there, as well as Kaito and Shark over the buildings. 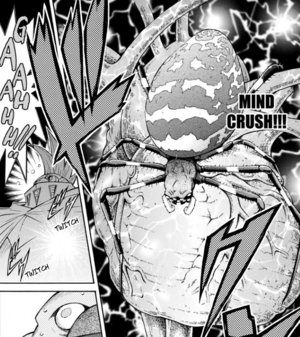 Shark yells Yagumo's name, as Yagumo tells him "long time no see". He also says that with some many people there, he should introduce himself. He says he's Kyoji Yagumo, commander of Operation Numbers Retrieval. Takashi and Tokunosuke note Yagumo is standing on several huge spider webs, which aren't A.R.. Astral deduces Yagumo is the one behind all the "Numbers" incidents, and that he must have joined Dr. Faker. Yagumo says he would soon have all their "Numbers", but first he must punish the loser. He says any captain who loses his ships should go down with them, shocking Eviluder. Yagumo declares that when Eviluder became his subordinate, his "pet" nested in his heart. Finally, he says he has no use for incompetence, as a spider attacks Eviluder's heart, causing him great pain, before he falls to the ground. Astral and Kotori call Yagumo cruel, while Yuma yells at him, saying that one can't treat a Duelist like that, not even an enemy. Yagumo tells Yuma to worry about himself before others. He asks Yuma if he really thinks he can survive this fight, as he is facing Shark, Kaito and him, and as the battle is already underway - the "Numbers War". Yuma, Astral, Shark and Kaito are surprised at Yagumo's words, as he declares that he is certain to win. Shark asks Yagumo what happened to him, to which he replies saying Shark have gotten rude since the last time they met, already asking personal questions. After a brief moment of silence from both, Yagumo tells Shark that hope and despair are to sides of the same coin - the greater one's hope, the deeper one's despair. He also tells Shark he's special to him, and that someday he would teach him that, as huge spider legs grow out of his back. Yagumo then leaves laughing, with Shark yelling at him to wait. Luna tells Shark to go, as they can't afford to do anything foolish then. Kaito says he's sick of this, and leaves as well. Tokunosuke says that just got huge, while Astral tells Yuma they can't afford to lose this "Numbers War". Yuma holds his pendant and says that they are going to do it, and that he is going to "jet".

Turn 5: Yuma
Yuma draws and activates "Monster Reborn", Special Summoning "No. 39: Utopia" (2500/2000) from his Graveyard in Attack Position. He equips it with "Double Buster Swords", allowing it to attack twice and inflict piercing battle damage, at the cost of destroying it during the end of the turn. Yuma attacks "Starship Galaxy Tomahawk" with "Utopia", destroying it and inflicting piercing damage (Eviluder 4000 → 2500). Then, he attacks Eviluder directly (Eviluder 2500 → 0).