The Numbers Club head to Heartland to find "Number" cards. However, when they started thinking there was no Numbers Hunter in there, an assassin working under Mr. Heartland comes after Yuma.

Following Tokunosuke's clue, the Numbers Club go to the Heartland Theme Park, in order to collect "Numbers" cards. Yuma complains that they have to pay to enter, and wonders if his allowance is enough for all, but at that time, an employee from the park tells him that since recently, Duelists can enter for free, and wishes him a good day at the park. While Tetsuo celebrates, Cathy looks at Kotori and says that "as only Duelists can enter...". However, Kotori takes the Deck she built previously to cheer Yuma up, and the employee says that if she has a Deck, she can enter. As everyone gets in, Yuma asks Tokunosuke where the suspicious place is, and he answers telling them to follow him. He leads the group to the Crystal View Coaster, where they all take a ride in the roller coaster; he then takes them to the Surprise Slide, and right before he led them to another attraction, Yuma beats him and deduces Tokunosuke doesn't actually know where the Numbers Hunters are. Tokunosuke apologizes and says there is one more attraction he would like to show them. They then go to another attraction. Yuma asks why would the Numbers Hunter show up there, while Cathy asks if he doesn't just want to check it out. But Tokunosuke says that's not it, and explains that he read in the internet that a kid had bad experiences at there. Takashi explains that's the Nature Crooz, an attraction owned by Captain Corn. Yuma laughs at it, because Captain Corn is one of the park's mascots. However, Tokunosuke explains people say he is a good Duelist. Astral tells Yuma that if he is a Duelist, they should go meet him. Yuma says Captain Corn is just a mascot, but Astral doesn't listen to him and tells him to go. Yuma says to himself Astral is just doing that for fun. Meanwhile, Captain Corn observes them through a camera, and notices Yuma.

The wagons are split.

The Numbers Club then go to the Nature Crooz, where Captain Corn shows up in a screen welcoming the customers. Kotori says she is getting a little nervous. Takashi tells her she shouldn't, as they are not even sure if there are Numbers Hunters there, but Tetsuo laughs and notifies him that his legs are shaking, and Takashi replies saying it's a warrior stance. The group finally get to the coaster. When they sit, a man dressed as a bean stops Yuma and tells him they are offering a special seat for him, which is the last one. Yuma gets happy and sits there. The ride then starts, but at a certain point, Yuma's wagon is separated from the others', and takes another route. Kotori soon later notices Yuma is missing. Tetsuo says it was the bean-man who made Yuma sit apart from them, and jumps out of the coaster. Kotori and Cathy then "jet", and jump out as well. Against their will, Takashi and Tokunosuke then jump too.

Cathy and Kotori jump from the wagon.

Meanwhile, the wagon Yuma and Astral are in stops, and Captain Corn appears before them, welcoming them to his Nature Crooz, and saying he has a special surprise for them—a chance to Duel him. Yuma then says he guess Tokunosuke was right, and shows Captain Corn his "Number": "No. 39: Utopia". He then tells him that if in the same way Captain Corn wants to collect his "Number", he wants to collect Captain Corn's. He also says that he is there to defeat Corn because of what he did to that kid, and that he was not letting him get away with that. Corn, a bit irritated, asks him if he is some kind of hero, and Yuma says he was not losing to a pirate like him, while taking his D-Pad. However, before Yuma says "Duel", Astral interrupts him and says "Duel" himself. Yuma complains that's his line, while he and Captain Corn establish a link with their Duel Gazers, and begin the Duel. 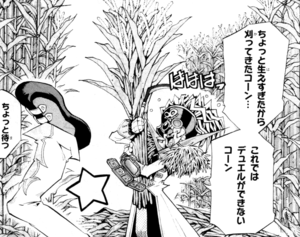 Captain Corn cuts down some stalks of corn.

Captain Corn goes first, and activates his Field Spell Card "Corn Parade", covering them with corn plants. Captain Corn starts cutting down some stalks, and says he does that because they grow too tall, and he can't Duel with all them in the way. While he does that, Yuma yells at Astral asking why he disappeared, and asked him if he was having fun. Astral, embarrassed, looks away and answers that it was for no big reason. He also makes an observation to himself: he enjoyed himself at the park. Corn then says the area is now clear, and goes on with his turn. He Normal Summons "Cattycorn" and Sets a card. Yuma then goes, and Summons "Zubaba Knight". He attacks "Cattycorn", but Captain Corn activates his Field Spell's effect, which summons a scarecrow, blocking the attack. 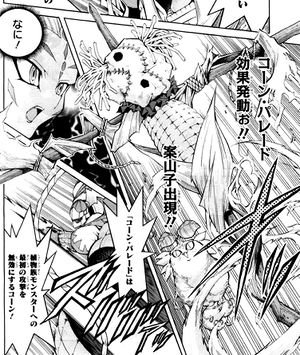 The effect of "Corn Parade" Summons a scarecrow.

He explains the Field Spell can negate the first attack on a Plant-Type monster he controls. Astral tells Yuma that Corn seems to be strong, and advice him not to let his appearance deceive him. Yuma Sets a card and ends his turn. Corn Summons "Pappycorn", who with its own effect, gains 1000 ATK points. "Pappycorn" attacks and destroys "Zubaba Knight", reducing Yuma's LP to 3400. At that time, Yuma activates his face-down card "Feather of Garakarasu", Special Summoning "Garakarasu" from his Deck. He also activates its effect; the crow splits into a herd, and the crows eat the corn Field. Yuma explains "Garakarasu" can destroy a Field Spell Card when it is Special Summoned—with this, the ATK of "Papa-Corn" goes back to 1200. Irritated, Corn then Overlays his two monsters, and Summons his "Number": "No. 50: Black Ship of Corn".