"Guide Us, Deck!!" (デッキよ導け！！ Dekki yo Michibike!!) is the twenty-seventh chapter of the Yu-Gi-Oh! ZEXAL manga.

When Kaito seemed to be in a hopeless situation, he surprises Hishakaku with his unshakable resolve and makes his comeback.

Hishakaku says that that's interesting, and that he wants to see Kaito do it. He explains that on his field, he has "Chariot Hisha" and Kaito's ace monster "Galaxy-Eyes Photon Dragon", while both Kaito's hand and field are empty. Worried, Yuma mutters Kaito's name, and tells Kaito that he can't win this. However, after a brief hesitation, Kaito replies asking "So what?!", and tells Hishakaku that he has infuriated him, and now he'll pay for it. Hishakaku says that he accepts the challenge, and ends his turn by Setting a card. 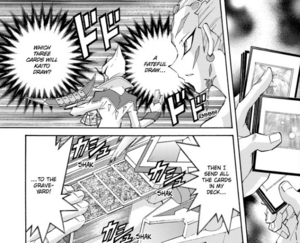 Kaito bets on his draw, milling his whole Deck.

Kaito declares that his Deck holds the future for Haruto and him - it's their very life - and that it would never betray him. Kaito then asks his Deck to guide him and Haruto, and draws. He draws and activates "Card of Desperation", drawing 3 cards, and then sending his entire Deck to the Graveyard. Hishakaku is shocked on how Kaito is going to bury his whole Deck, while Astral says to himself it's a fateful draw, and wonders which cards Kaito will draw. Hishakaku is shocked that Kaito threw away his whole Deck for 3 cards, since in Duel Monsters, if you can't draw a card on your turn, you lose. He says that unless Kaito defeats him by the next turn, he will lose. However, Kaito says that these cards are enough to send Hishakaku to hell. Yuma says that Kaito is amazing, and that he is not even close to giving up, while Astral says that Kaito is a fearless Duelist, and that this truly is a Duel in the edge of a cliff.

"Galaxy Dragun" is powered up by "Dragon Buster". 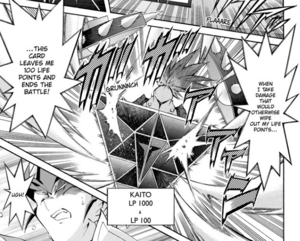 Hishakaku declares that if he simply ends his turn, his victory would be assured, but that would be boring, so he will checkmate Kaito himself. He activates "Battery Unit Charge", attaching it to "Chariot Hisha", making Yuma worried. Hishakaku activates its effect, detaching an Xyz Material and destroying "Galaxy Dragun". He then declares that this is the end, as he attacks Kaito directly with "Chariot Hisha", making both Yuma and Astral worried, but Kaito activates his face-down "Final Life Gardna", leaving him with 100 Life Points and ending the Battle Phase. A warrior appears and deflects the spiked wheels of "Chariot Hisha" with its shield, however Kaito is still threw away. Yuma asks Kaito if he is okay, with Kaito telling him to stay back, and saying that he can still fight, as he stands up, tottering. Hishakaku calls Kaito stubborn, and ends his turn. 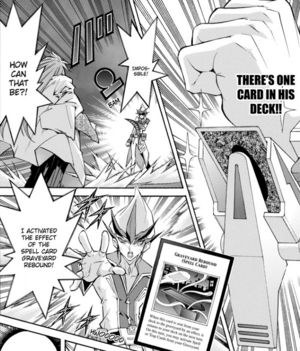 Kaito prevents himself from Decking out with "Graveyard Rebound".

Yuma says that "That didn't end the Duel, so...", with Astral confirming it. Hishakaku laughs loudly, saying that victory is his, and that on Kaito's turn, he doesn't have a card left to draw form his Deck. Yuma is worried, saying that Kaito can't lose now, as Hishakaku tells Kaito that it is his turn, and with that, he wins the Duel, but Kaito says that he wouldn't bet on it, as Hishakaku notes Kaito has one card left in his Deck. Hishakaku is shocked, and asks how can that be, with Kaito explaining that he activated the effect of "Graveyard Rebound", returning it to his Deck from the Graveyard. Kaito declares that he sent his whole Deck to the Graveyard to draw that card. Surprised, Astral says that Kaito appeared to be Dueling recklessly, but he had planned the whole thing, and Hishakaku asks Kaito if he pretended to be cornered, but it was a trap. Kaito declares that he will do anything for Haruto, even walk a path of carnage, and that he will take both Haruto and "Galaxy-Eyes" back with his own hands. He then declares his turn, and draws. 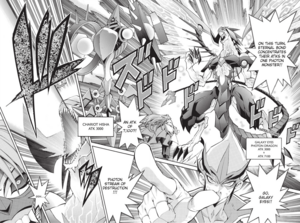 "Galaxy-Eyes Photon Dragon" returns to Kaito and gains the ATK of the other "Photons". 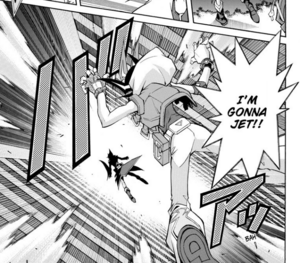 Yuma is glad that Kaito actually won, and Astral says that he is quite the Duelist. Hishakaku tells Kaito that was a brilliant Duel, however, he cannot let him go. He explains that this spider web is rigged with ignition devices, and declares that he is taking Kaito out with him, as he triggers the explosives, making the spider web field break. Hishakaku says farewell to Kaito, and says that he will see him in hell, as he falls down. Yuma tells Kaito to run, but Kaito is too impaired, and has no strength to stand, falling down the buildings as well. Desperate, Yuma says that he is going to "jet", as he jumps towards Kaito.

Turn 7: Kaito
During his Draw Phase, Kaito would lose as he didn't have a card on his Deck to draw, but the effect of his "Graveyard Rebound" activates from his Graveyard, returning it to the Deck. Kaito then draws and activates it, which allows him to activate a Spell or Trap Card from his Graveyard. He activates "Eternal Bond", Special Summoning "Photon Crusher" (2000/0) and "Photon Slasher" (2100/0) from his Graveyard, both in Attack Position; as his "Photon" monsters outnumbered Hishakaku's, the other effect of "Eternal Bond" allows Kaito to take back the control of "Galaxy-Eyes Photon Dragon", while increasing its ATK by the ATK of all other "Photon" monsters on the field (3000/2500 → 7100/2500). Kaito attacks "Chariot Hisha" with "Galaxy-Eyes Photon Dragon". (Hishakaku 4000 → 0).