"Line World!!" (ラインワールド！！ Rainwārudo!!) is the twenty-sixth chapter of the Yu-Gi-Oh! ZEXAL manga.

As Kaito is in a tight spot on his Duel against Hishakaku and the power of his "Line Monsters", Kyoji Yagumo threatens Haruto's life. 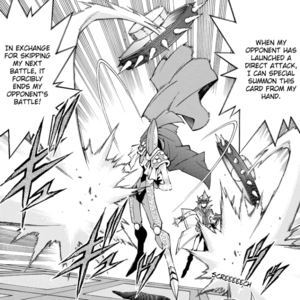 Kaito growls in frustration as "No. 72: Line Monster Chariot Hisha" destroyed his two cards. Hishakaku repeats that any cards that he destroys goes to his Graveyard instead of Kaito's, as Kaito's two cards fly towards Hishakaku's Graveyard slot. Yuma says Hishakaku got Kaito's "Galaxy-Eyes", and Astral comments that "Line Monsters" destroy all cards in their path - just like in Shogi. Hishakaku declares his attack isn't over yet, and orders "Number 72: Line Monster Chariot Hisha" to attack Kaito directly. Yuma says he's got to be kidding - "that thing" has 3000 ATK, and if Kaito gets a direct hit... But he is interrupted by Kaito, who declares he activates the effect of "Photon Jumper", as he Special Summons it in Attack Position. He explains that he can Special Summon this card from his hand when his opponent launches a direct attack, and that in exchange for skipping his next Battle Phase, it forcibly ends his opponent's Battle Phase. "Photon Jumper" deflects the spiked wheels of "Number 72: Line Monster Chariot Hisha", negating the attack, and Yuma sighs in relief. Hishakaku says Kaito managed to avert disaster, and Sets a card, ending his turn.

From the top of the building, Kyoji says that without "Galaxy-Eyes", Kaito is a pitiful hawk with broken wings, and that he just has to wait for him to fall. Haruto, who stands next to Kyoji with the latter's arm holding him by the shoulder, says "Big brother...", with a sad expression. Kaito yells to Kyoji that he won't let him take Haruto, which makes Yuma and Astral note that's Kaito's little brother. After a brief hesitation, Yuma rushes, with Astral asking him what he is doing. Yuma says Astral saw him - he is taking "that boy" hostage, as he enters the building. However, when Yuma tries to take the elevator, he finds it closed for maintenance, and growls in frustration. Astral asks Yuma if he intends to save him and ally himself with Kaito, but Yuma says that he is not taking his side, as he rushes towards the stairs. He explains that he can't stand three things: lies, Nattō and cheating Duelists. Astral says he can't comment on the Natto, but otherwise he completely agrees. Yuma says "So here goes!!", and "jets". 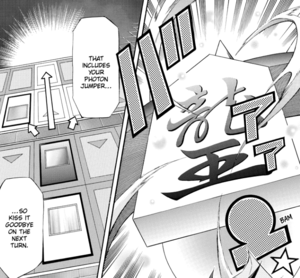 "Chariot Hisha" is promoted, increasing the range of its effect.

Back to the Duel, Hishakaku tells Kaito it's his turn. Kaito declares his turn, and draws. Hishakaku immediately activates a Continuous Trap Card, "Line Promotion", and explains that when "Line World" is on the field, this card amplifies the effect of any "Line Monster" that has destroyed an enemy monster - this expands the effect of "Chariot Hisha" to include the squares diagonally in front of it. The "hisha" ("rook") piece on the shoulder of "Chariot Hisha" lights up and becomes a "ryū ō" ("dragon king") piece. Hishakaku says that that includes Kaito's "Photon Jumper", so tells him to kiss it goodbye on the next turn. Kaito asks what is this, and says to himself it's just like promotion in Shogi. Kyoji says at last Kaito have realized the true terror of "Line Monsters". Hishakaku explains that when a "Line Monster" destroys an opponent's monster, it is promoted and its effect amplified - in other words, as they continue the Duel, Kaito will have fewer and fewer "squares" to play on. Kaito groans, and Kyoji laughs and tells Kaito that the spider has trapped him in its webs.

At that moment, Yuma arrives in the roof and tells Kyoji to hand over Haruto. Kyoji turns around and says "my, my..." noticing Yuma, who is puffy. Kaito is surprised at Yuma. Kyoji asks Yuma if he wanted something, and Yuma yells saying that he said to let Haruto go, and explains that Kyoji is obviously taking him hostage, and that guys who Duel dirty like that make him want to puke. Calmly, Kyoji says that he sees, and that he guesses even a third-rate Duelist who would be helpless without Astral has a sense of aesthetics. Astral tells Yuma the part about he being third-rate and helpless without him are accurate, and awkward, Yuma tells him to shut up. With a more serious expression this time, Kyoji says he is not opposed to aesthetics himself, and that in fact, he respects them. 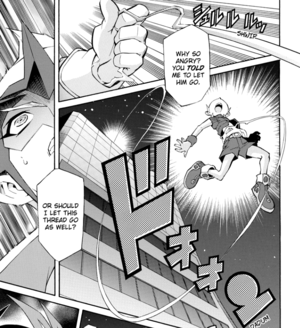 He then says "as you wish then", and pushes Haruto off from the building, shocking Yuma and Kaito. They then note Kyoji is holding Haruto suspended in the air with a spider web, going up and down due to the elasticity of the thread. Kyoji asks why Yuma is so angry, once he told him to let Haruto go, and asks if he should let this thread go as well, as Kaito watches astonished. Yuma goes to the edge of the building, worried about Haruto, and tells Kyoji "why, you...!!", with angry, as Kyoji laughs. Angry, Kaito asks Kyoji how dare him toy with Haruto's life, and says that he will pay for this. Hishakaku mentally tells Kaito to keep losing control, and says that Duels are like Shogi - if you can't make calm decisions, you will lose. He tells Kaito it's his turn. Kaito switches "Photon Jumper" to Defense Position and Sets a monster, ending his turn. 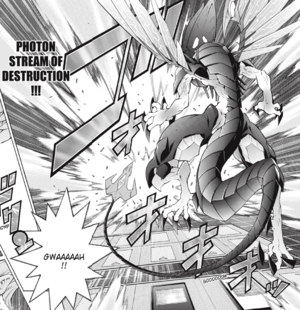 Kaito takes the attack of his own "Galaxy-Eyes Photon Dragon".

Astral comments that Kaito's hand is empty again, and all he has on his field are defensive monsters. He also says he never thought he would see Kaito pressed so hard, and that his opponent is fearsome. Hishakaku declares his turn, as he draws. He activates the effect of "Chariot Hisha", detaching its last Xyz Material to destroy "Photon Jumper". He then declares that then, for the end game, he activates a Spell Card, "Line World Revival": when "Line World" is on the field, this card can revive a monster from his Graveyard. Apprehensive, Kaito tells Hishakaku he wouldn't, but it's interrupted by him, who says he would - a true master of Shogi uses his opponent's pieces as easily as his own. He then orders the "incarnation of light" to arise from the grave - "Galaxy-Eyes Photon Dragon" is Summoned to his field, surprising Yuma and Astral. Kaito says the name of "Galaxy-Eyes". Hishakaku asks Kaito how it feels for his own best monster to corner him, and says that he has two monsters with 3000 ATK, so Kaito is in check. Kaito groans, as Hishakaku orders "Chariot Hisha" to attack his face-down monster - which is "Photon Baby" - who is crushed by its spiked wheels. Hishakaku says that now there are no monsters on Kaito's field, and declares a direct attack with "Galaxy-Eyes Photon Dragon". "Galaxy-Eyes" fires its Photon Stream of Destruction on Kaito, making him scream. Watching that, Haruto's eyes start emanating light. Kyoji laughs out loud, telling Kaito that's a wonderful view, and Yuma yells Kaito's name, worried. 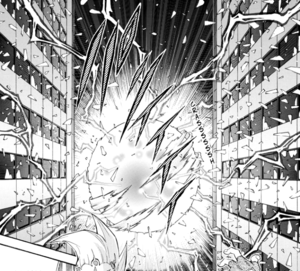 A huge sphere of energy is created by Haruto.

Kaito moans, laying in the ground, and Orbital 7 goes towards him, saying "Master Kaito!!", as his Life Points go down to 1000. Shocked, Haruto says "Big... brother...", and starts screaming, creating a huge ball of energy which crashes the windows of the building nearby. Covering his ears, Yuma asks what is that, and Astral asks if that amazing power could have come from Haruto. Kyoji says to himself he pushed Haruto too far, and says that that's enough entertainment, pulling the spider thread back and taking Haruto on his arms. He tells Kaito that now that "Galaxy-Eyes" has turned against him, he stands no chance of winning. Spider legs then grow from his back, and he tells Kaito to vanish. Kaito orders Orbital 7 to go after him, to which it replies saying "Yes, sir!". Yuma angrily yells that Kyoji won't get away, and jumps after him, but fails to grab his leg. Kyoji calls him idiot, as Yuma falls over Orbital 7, knocking their heads. Orbital 7 ends up thrown against the building, while Yuma falls down next to Kaito in the web's field. Still on the ground, Yuma asks Kaito if he is okay. Kaito moans and says that's none of his business. However, Yuma says "But you... your brother...". Kaito grits his teeth and asks "So what?!", and yells saying that he doesn't need Yuma's sympathy. He says that he won't accept anyone's help, and that he won't ask anyone to save him - he will rescue Haruto on his own. Shocked, Yuma murmurs Kaito's name, as Kaito explains that to do so, he will defeat this Duelist, as he turns around towards Hishakaku.

Turn 2: Hishakaku
Hishakaku attacks Kaito directly, but Kaito activates the effect of "Photon Jumper" from his hand, Special Summoning it (0/0) in Attack Position and ending Hishakaku's Battle Phase, in exchange of skipping his own next Battle Phase. Hishakaku Sets a card.

Turn 3: Kaito
Hishakaku activates his face-down "Line Promotion"; if a "Line Monster" has destroyed an opponent monster while "Line World" is on the field, that monster's effect will be amplified. "No. 72: Line Monster Chariot Hisha" is promoted to a "Dragon King" piece, and its effects are amplified; now, it may either destroy all cards vertically in front of it or the two cards diagonally in front of it. Kaito switches "Photon Jumper" to Defense Position and Sets a monster.