Orbital 7 is a character appearing in the Yu-Gi-Oh! ZEXAL manga. He is Kaito Tenjo's personal servant. 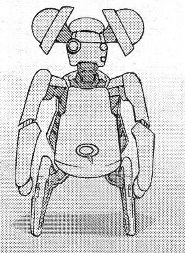 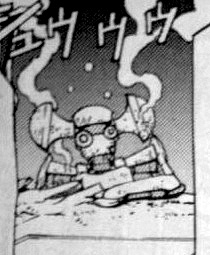 Orbital 7 is an assistant robot, and has shown several functions. He seems to be able to localize "Numbers", and when Kaito Duels a "Number" holder, he creates a barrier where time virtually freezes, making only "Number" holders be able to move inside it. He also is able to project images, cause an explosion by having a "self-explode" button triggered (although Orbital 7 is not severely damaged by the explosion), enter a "flight mode" with which he can carry Kaito flying and enter a "fight mode" where he becomes bigger and uses drills to attack an enemy. Orbital 7 has resistance to water, with even being carried far away underwater not causing him damages. 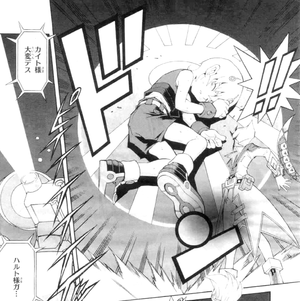 When a bandit attempted to rob a shopping mall, Kaito appeared with Orbital 7, using the latter's powers to create a barrier where only Number holders can move. He quickly defeated the bandit and obtained his "No. 20: Giga-Brilliant", departing afterwards.[1]

Kaito later found Yuma. Orbital 7 froze the time right when Yuma would be ran over by a car, saving him, and seeing he had "Number" cards as well, forced him into a Duel. Kaito overpowered Yuma during the Duel, Summoning two "Numbers" during his fist turn, and rendered his opponent's efforts useless with his signature card, "Galaxy-Eyes Photon Dragon",[2] but just before Kaito was about to win the Duel, Orbital 7 showed Kaito that his brother, Haruto, had collapsed. Kaito then cancels the Duel and flees flying with Orbital 7 on his flight mode.[3] 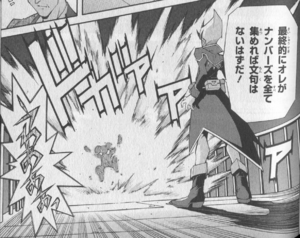 Afterwards, when Yuma and his friends were escaping the Heartland Theme Park, Kaito and Orbital 7 went to meet them. Kaito challenged Yuma to a Duel in order to obtain his "Numbers", but Mr. Heartland appeared from the upper stairs, interrupting them. Mr. Heartland gave ordered Kaito to hunt the Numbers for him. However, Kaito stated that he didn't become a Numbers Hunter because of his orders, and triggered Orbital 7's self-explode mechanism, kicking him towards Yuma's gang, which destroyed part of the bridge. This made Yuma and his friends fall in the water under them, which allowed them to escape. Mr. Heartland told Kaito that this action was a big act of disobedience towards him and Dr. Faker. Kaito and Mr. Heartland, both irritated, stared at each other for a few seconds. Kaito then just turned around and left the room, ordering Orbital 7 to go with him, and the robot, apparently unharmed, immediately complied.[4] 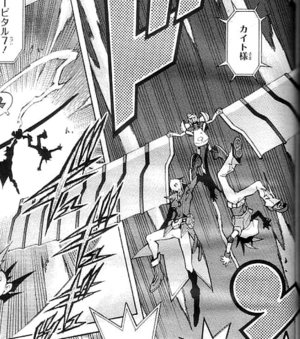 Kaito used Orbital 7's flight mode to take Haruto away from the Heartland Tower.[5] When Kyoji kidnaped Haruto, Kaito ordered Orbital 7 to go after him; he entered in flight mode to chase Kyoji, but Yuma fell down from the building and crashed on Orbital 7, with Orbital 7 being thorwn away and hitting the building.[6] After Kaito's Duel with Hishakaku ended, Hishakaku exploded the web field they were in, causing Kaito and Yuma to fall; before they crashed in the ground, Orbital 7 catched them flying, however, when Orbital 7 hit the building he was damaged, so he lost control and they fell in the water. Yuma manages to take Kaito out, but Orbital 7 was carried far away by the flow. When he woke up, he was surprised by a huge fish, making him quickly fly to outside of the water. He then noticed how far he was get swaped out, and rushes to get back to Kaito. He then met Kaito again after Kaito's Duel with Shadow, taking Kaito away with his flight mode. They then headed to their new headquarters.[7] 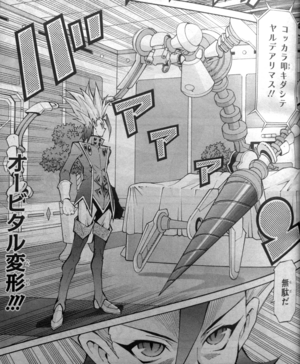 Orbital 7 appeared following Kaito when he went after Number 63's holder,[8] when he watched Yuma Duel Eviluder[9] and when he Dueled Shark[10]. After Kaito's Duel with Shark, where both fell in Shadow's trap, Orbtial 7 looked after Kaito, who was injured. Kyoji then sent one of his clone spiders to capture Kaito; Orbital 7 entered in battle mode and confronted him, but Kyoji used a spider to enter Orbital 7 and damage one of his cables, causing his attack to cease.[9]