Dr. Faker is a character appearing in the Yu-Gi-Oh! ZEXAL manga. He was a scientist whose goal to destroy the Astral World drives many important parts of the series' plot.

Faker is originally introduced as somewhat power-mad, obsessed with destroying the Astral World using Haruto's powers– even if the boy exerted himself to collapsing in the process. Despite his inhumane methods, he was a brilliant scientist– having developed trans-dimensional machines capable of contacting the Astral world, and had been working to develop sustainable energy prior to Haruto's accident.

However, Faker was always a devoted father who cared immensely for his children– having gone so far as to forfeit "his humanity" for his son. He maintained his attacks on Astral World for over a year, in spite of failing health, driven only by the hope that Haruto could get his soul back. Ultimately though, Faker's premature death hinders deeper understanding of his character. 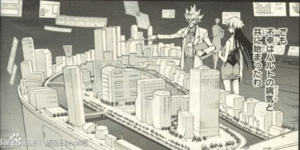 Dr. Faker along with Luna.

Dr. Faker was originally a researcher looking to develop a new energy source, together with Luna, who was his assistant at the time. As in the anime, Haruto and Kaito are Dr. Faker's sons, and Faker attempted to use the power of the Astral World to cure Haruto of his illness. Instead, Haruto gained his dimension-warping powers and his soul became lost in the Astral World. Faker set out to destroy Astral World in the hopes that it would bring his son's soul back. 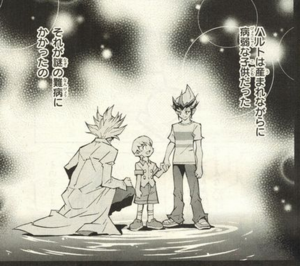 Faker with his sons.

However, like his son Faker also suffered from an incurable disease. Worrying about his son's future, he allowed the con artist Mr. Heartland into his confidence under the promise that Heartland would cure his boy[2]. He eventually died of natural causes a year before Yagumo and Heartland's battle later in the series, his death hidden by Heartland and his body left to rot in his lab in Heartland Theme Park. [3]

In the present, Dr. Faker is introduced as an evil scientist whose objective was to destroy the Astral World.[4][5] Towards that objective, he used his sons Kaito and Haruto Tenjo.[4]

Mr. Heartland revealed that he took Haruto away from Kaito under Dr. Faker's orders.[6]

Dr. Faker seemed to have manipulated Haruto and transformed his mind so that he would use his powers to destroy the Astral World. Meanwhile, Faker manipulated Kaito to collect the "Numbers" for him, saying that if he did so, Haruto would go back to normal.[7] While talking to Mr. Heartland, Faker stated that Kaito had given up his humanity to protect Haruto, just as Faker had given up his to protect the city. Faker also said that he knew a messenger would be sent from the Astral World and that he would crush it thoroughly, sending its remains back to their world. He claimed it's the only way to protect the planet.[4]

Dr. Faker also "created" servants to collect the "Numbers". He made a corn into a human[8], "created" a person from electron drips[9] and gave a doll a life[10]. Then, he sent these three to work as "Numbers Hunters" under Mr. Heartland's orders in the Heartland Theme Park.[11] It was later revealed that Dr. Faker gave the three souls, and that if they failed, they would lose their souls, going back to their original form. This is what happened to both Captain Corn and Thunder Spark. The same would happen to Cologne, but Grandpa Demetto gave her his soul, so she was kept alive.[12]

When Luna Dueled Shark, she said Shark was the only person who can stop Faker's ambitions. Also, after absorbing three consecutive "Numbers", Astral recovered the memory of Dr Faker being his enemy, and that he planned to use the hidden power of the "Numbers" to destroy the Astral World - however, it was connected to this world, so, if the Astral World dies, this one will die as well. Takashi asked if Dr. Faker knew both worlds are connected, and Cologne said that he brought her to life, but that he was a really scary scientist, and that she wouldn't put it past him. Takashi and Tokunosuke get scared on how he knew about that fact but still wanted to destroy the Astral World, and on how a man like that is collecting the "Numbers". Yuma sid that they had to get the "Numbers" first to stop Dr. Faker's plans, and Tetsuo then deduced the fate of the world was riding on this. Then, everyone, except for Tokunosuke, got spirited up and say that they would keep on collecting the "Numbers", and that the Numbers Club would protect the world - stopping Dr. Faker's plans. [5] 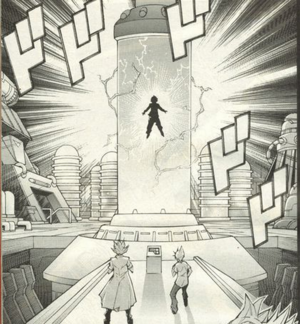 Faker trying to save his son, Haruto.

After Yuma, Shark, and Kaito defeated Shadow, the trio were taken in by Luna who explains the rest of Dr. Faker's motivation and past. She noted her suspicion that Astral had been sent to Earth as a form of retaliation in response to Faker's attacks. Meanwhile, Kyoji Yagumo and Mr. Heartland began their own Duel. As Kyoji began his second turn, he activated the Field Spell, "Court Battle", telling Heartland he was on trial for his "sins". Kyoji then taunted Heartland, asking if he'd like to "call Faker as a witness?" He then answered himself that Heartland could not, because Faker was dead.[1] 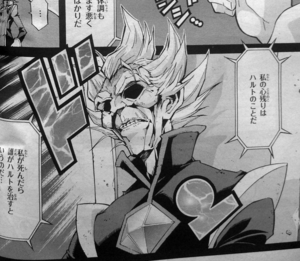 Faker's corpse in his lab.

As his and Mr. Heartland's Duel continued, Kyoji elaborated on his earlier claim by calling "himself" to the stand. He then revealed a clone made up of small spiders ejected by "Number 70", which he was able to link his vision with. He explains that over the past year, no one had been allowed to see Dr. Faker in person, leading him to suspect something was amiss. He used his spiders to infiltrate Faker's lab and found a video recording made by the doctor as part of his research logs. [3] In it, Faker remarked that after 1 year and 15 days since he began his attack on Astral world, he had made no progress, and his health was in rapid deterioration. Like his son, Faker was beginning to succumb to his own incurable illness and recognized that he did not have long to live. He claimed his only regret was that without him, no one would be left to cure his youngest son.

Kyoji realized that Faker was nothing more than a "pitiful father trying to save his sick son" and his natural death one year prior was being used by Heartland to deceive and control Faker's former agents. Heartland continued to resist these charges claiming that he had nothing to gain. However Yagumo explained that Heartland's real goal was to steal the valuable limitless energy machine Faker was developing prior to his attacks on Astral World, in order to amass wealth for himself. Thus Heartland hid Faker's death from everyone– even Faker's own children. [3] 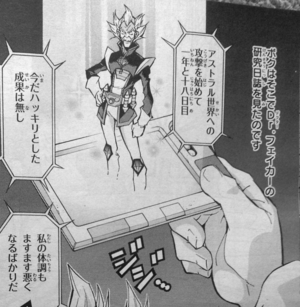 Kyoji went on to explain that Faker had relied on a special medication to prolong his life. Heartland had used his connections with Faker to hack the databases of the pharmaceutical company that made this medication to find other victims to swindle. He labeled Heartland as a common con man who made his living by working his way into the confidence of those near the end of their lives to take their fortunes– with 689 victims total. 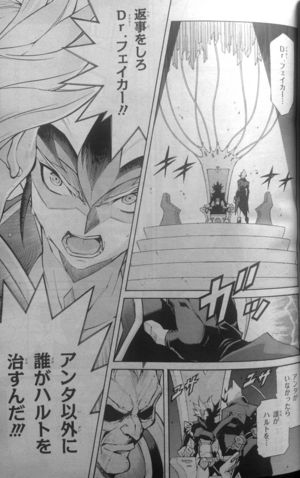 Kyoji then asked Heartland what he promised Faker to gain his confidence; whether it was that he would take care of Haruto when he died or if the boy would be cured if he did as Heartland said. At this point Heartland revealed his true colors with a menacing grimace, telling Kyoji that he knows too much and can't be allowed to live. However, Yagumo won the Duel using the power of a Blank "Number", and revealed that Heartland had stopped Faker's attacks on Astral World recently, fearing of the destruction of Earth. However, unlike Heartland, Yagumo wanted to carry out the destruction of the two worlds out of personal disgust.

Kyoji later abducted Kaito and brought him to Faker's body. Kaito expressed visible shock at the revelation, shaking his father's body and shouting "If you don't cure Haruto, who will?!"[2]" Yagumo later commented that it was strange that Kaito referred to his father as "Dr. Faker" all this time, to which Kaito angrily told him that it was none of his business.

It remained unclear how many of the appearances made by Dr. Faker seen until that point in the series was the genuine Faker prior to his death, or some illusion as part of Heartland's masquerade.