Captain Corn is a character appearing in the Yu-Gi-Oh! ZEXAL manga. He is a Numbers Hunter working for Mr. Heartland in the Heartland Theme Park disguised as an employee. There, he owns the Nature Crooz attraction. 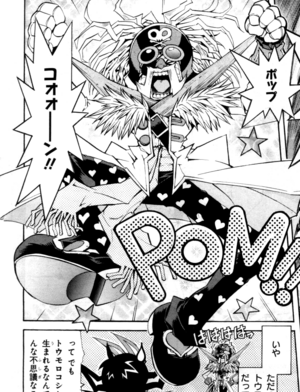 As name implies, his face resembles a piece of corn, whilst his clothing showcases his career as a pirate via a large comical pirate hat which features a skull and crossbones and tight leather pants. He also has a large handlebar mustache and is always seen smoking a cigar. Captain Corn also holds a real sword and seems to have great skills using it. 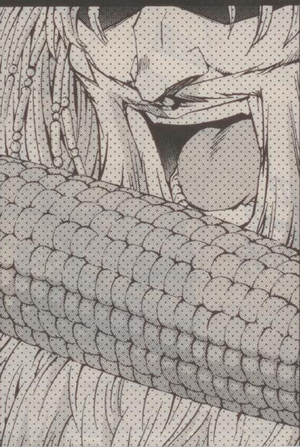 Captain Corn in his past life as corn being eaten by Captain Roberts.

Captain Corn was a ear of corn that was harvested from America in the 18th century, and was boiled and consumed by a pirate known as Captain Roberts, except for a single kernel of corn which fell into Captain Robert's compass. The kernel of corn traveled around the world with Captain Roberts. When Dr. Faker found Robert's compass, he opened it and a piece of corn fell out into Faker's machine, reviving him with the appearance of a cob of corn.[1] He gave Captain Corn a soul,[2] and made him work under Mr. Heartland.

Captain Corn is first introduced together with Thunder Spark and Cologne as the Theme Park's "guardians of peace and justice".

After being revived by Dr. Faker, Captain Corn worked as a entertainer on a vegetable-themed roller coaster attraction within the Heartland Theme Park called "Nature Crooz", dressed as a his previous career of a pirate. He locates "Numbers" holders using a special camera, and then uses the ride to attract them to him, which he will then Duel, and get their "Numbers" cards.[3]

When Yuma Tsukumo and his friends from the Numbers Club entered the ride, Captain Corn separated Yuma from the others and challenged him to a Duel betting their "Numbers". Straight away, he gained the advantage by Summoning his "Number": "No. 50: Black Ship of Corn", which shocked Yuma and Astral.[4] Corn also trapped Yuma's friends on the ride, nearly causing them to be run over by a mine cart. Cathy saved them by pulling a lever, which caused the connected lever near Corn to hit him in the groin. When he lost, he exploded into a pile of popcorn, which Yuma and his friends then eat.[1]

It is later revealed that when Dr. Faker "created" Captain Corn, Thunder Spark and Cologne, he gave them souls. However, if they failed at their tasks, their souls would leave them, making them return to their original form.[2] Apparently, this was what happened to Captain Corn - after losing to Yuma, he failed at his missions, becoming corn again. Then, the explosion caused the corn to pop.

Captain Corn plays a "Corn" Deck which also features various cards to do with sailing and pirates such as ships, sea creatures and nets.