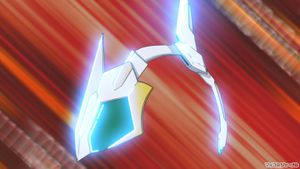 A Duel Gazer, known as a D-Gazer (Ｄ－ゲイザー, Dī - Geizā) in the Japanese version, is a device in Yu-Gi-Oh! ZEXAL which is worn over a person's eye. It allows the wearer to watch duels in an augmented reality setting.[1] 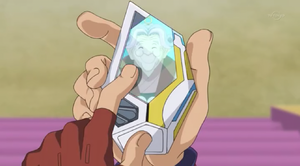 A Duel Gazer being used as a communicator.

In anime, they have been shown to be used as communicators, such as phones. They have also been shown to link together two different Duel Gazers for Duels and allow any other Duel Gazers to link to the Duel to see it. This most likely allows spectators to follow just one Duel even if there are multiple Duels using Augmented Reality occurring in the local area. They can also be used to check set cards if a player forgets what card they set and its effect.[2]

Like Duel Disks and Duel Runners, Duel Gazers have a standard version (light grey with blue lens), but also has different design colors, and different versions can be adapted with glasses as seen with Flip.[3] Nelson Andrews' Esper Sparrow mask can be connected with a Duel Gazer in a similar way as Flip's glasses.[4]

Some Duelists use special tattoos found at their left eye in place of a Duel Gazer. When activated, it spreads around the eye, forming into a shape that's unique to every Duelist. 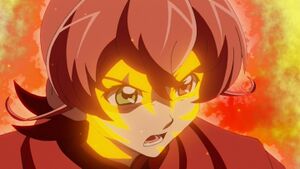 Trey's tattoo spreading throughout his body.

Kite Tenjo was the first Duelist seen capable of Dueling without a normal Duel Gazer;[5] consequently Trey, Quattro, Quinton, Dextra, Nistro, Luna, and Kyoji Yagumo are capable of Dueling in that manner as well.[6][7][8][9] When Trey receives special powers from Vetrix, his tattoo starts to glow, and cover more of his face.

In addition, although Astral does not need a Duel Gazer to Duel, his left eye is golden, as opposed to his light blue right eye, which is similar to the fact that a person wearing a Duel Gazer tattoo over their eye has their left eye color change.