Legend of the Dragons of Light and Time 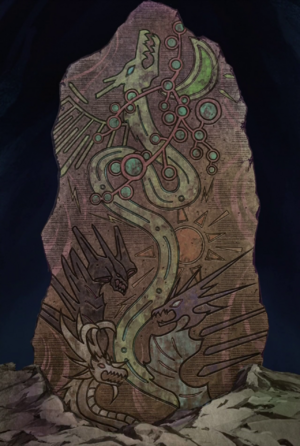 Tablet of the Legend

Kite Tenjo discovered a tablet detailing the legend when he returned to Jinlon's ruins at one point. The tablet stated, "Dragons of light and time, clash at thy place of birth. Then shall the eyes of the galaxies truly awaken for the first time, opening the gate to a new world." At this point Jinlon appeared and explained to Kite the origin of the Galaxy-Eyes dragons.[1] He shared the legend with Quinton, believing it was related to the Numeron Code and that said the Code would not function without the proper "Number" cards. He also determined the place of birth was actually the moon and noted he wanted to battle Mizar there to test the legend's authenticity and determine who the true "Galaxy-Eyes" master was.[2] 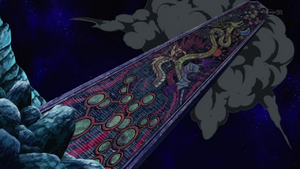 Tablet of the Moon

After the Seven Barian Emperors attacked Earth, Kite opted to head to the moon. When Mizar was about to defeat Quinton and Trey, Quinton shared the information with Mizar and Yuma, prompting Mizar to head to the moon himself afterwards.[2] Once on the moon, Kite saw multiple copies of the same tablet. 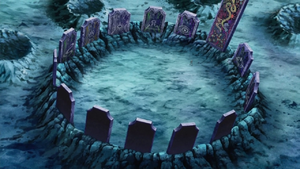 After Mizar arrived, Kite revealed more about the legend told to him by Jinlon himself. According to the Number spirit, the legend regarding both "Galaxy-Eyes" monsters is actually a spell cast by a dragon who was responsible for creating the Numeron Code in the first place. Lastly, Kite and Mizar's oncoming Duel will be able to break the spell, and thus whoever wins will obtain the key to use the Numeron Code itself.[1]

Kite would later call upon the power of the Numbers to create "Number 62: Galaxy-Eyes Prime Photon Dragon".[3] After the Duel, Kite witnessed the powers of his "Number" and Mizar's Mythyrian Number and Over-Hundred Number resonate to form "Numeron Dragon", and entrusted it to Mizar.[4]