Number ruins (ナンバーズの遺跡 Nanbāzu no Iseki) are ruins where the Mythyrian "Numbers" cards are sealed, guarded by its spirits across the world in the Yu-Gi-Oh! ZEXAL anime. There were seven[1] different locations of different "Number" ruins shown on-board the Different Dimension Airship.

Each set of ruins consist of deadly traps and inscribe a legend on its wall telling the story of the person who occupied that location in a previous era, before they became ruins due to the ravages of time. Kazuma Tsukumo had explored these ruins and left a "King's Coin" to mark his presence.

As the statue containing "Number 64: Ronin Raccoon Sandayu" was transported to the Duel Lodge, its ruins were not shown.[3] 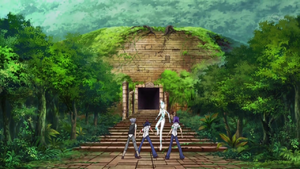 The temple's ruin is where one of the "Number 44: Sky Pegasus" slept. On its walls, a tale is inscribed about a pegasus named Mach who served a legendary hero. The hero served a land along his fellow knights, but eventually he returned to his to home village. Without the hero, the other three knights grew arrogant and usurped the King, but were intercepted by Mach and his master. Since the hero was unwilling to kill his former comrades, both master and steed were eventually defeated and killed. However, the hero's fellow knights regretted their actions and they buried him and Mach together. Mach later became the "Number" spirit guardian of "Sky Pegasus".

Dumon had some recollection of it as well and was able to read the ancient writings regarding the pegasus legend. Yuma Tsukumo and his friends traveled to this ruin in order to obtain the "Number".[1] Yuma faced Mach in a Duel with Shark's and Dumon's lives at stake, and won, getting the ruin's "Number".[4] 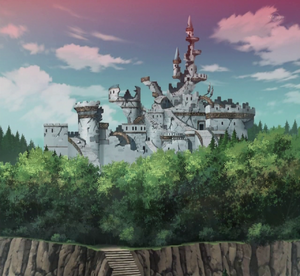 Known as the "Labyrinth of Screams" in the dub, this castle contained "Number 65: Djinn Buster". The ruin's prophecy, which Rio was able to read, spoke of a legend about a cruel prince, who never trusted anyone and killed his people whom he believed had plotted against him. When the prince was the only one left in his land, he committed suicide in atonement of his actions (in the dub, he drove all his people into exile, and soon discovered he had left himself in exile).

Vector and Number 96 arrived at these ruins, defeating the "Number" guardian, Battle Ox. By acquiring the Ruin's "Number", they also gained knowledge about the Ruin's traps and how to control them. During the visit, Vector was shown to be familiar with the ruins and felt dread towards both the ruins and its "Number". When Yuma and his friends arrived, looking for the ruin's "Number", Vector trapped them in cages, forcing Astral to face Number 96 in a Duel, while constantly threatening Yuma's life.[5] After Astral and Number 96 tied the Duel, Vector triggered an explosion within the ruins and fled with Number 96. Kite Tenjo saved Yuma and his friends from the collapsing ruins.[6]

According to Dextra, the residents believed the ruins were haunted by the spirit of the warrior because of his grudge against his unjust fate. Nistro believed the gladiator simply wished to fight more and regretted that he never finished his battle with his rival. The ruins was where "Number 54: Lion Heart" slept, protected by a large spirit in Spartan warrior armor.

In order to reach the ruins, Alito used traps to destroy the surroundings of the lake, draining it. When he tried to take the ruins' "Number", its guardian tried to repel him, but Alito was able to overcome the guardian's power and reach the "Number" card. Alito had his own nostalgia from these ruins when he explored them, and the guardian also seemed to recognize Alito.[7]

After defeating Alito and a brainwashed Nistro with the help of Dextra, Yuma found another King's Coin from his father in the ruins, and Nistro gave "Lion Heart" to Yuma.[8] 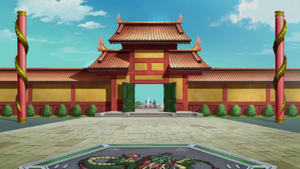 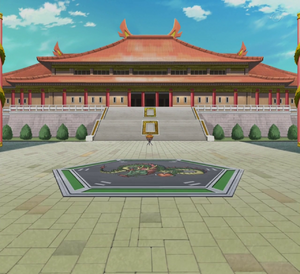 Unlike the other ruins, these ruins are very grand and lavish, with a traditional Chinese-style decor. The Number Guardian is Jinlon, who resides within the palace walls from atop a tall mountain.[2]

Jinlon was originally Mizar's noble dragon, who guarded the land alongside him. When disaster struck, a shaman, who was an agent of a neighboring nation, convinced the population that Jinlon was responsible for the disaster. Jinlon was tortured, but Mizar continuously protected him to convince the others that he was not responsible. Unfortunately, the opposing forces attacked, killing both Jinlon and Mizar (in the dub, Mizar ignored his heart and betrayed Jinlon, leading the village defenseless against the opposing forces).[9] Sometime after Dueling Jinlon, Kite finds in the mountains a tablet containing depicting various Dragons and legends about them including the "Galaxy-Eyes".[10] 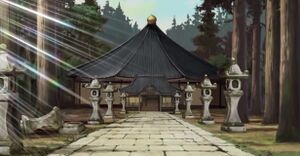 The Duel Sanctuary is similar to Number 46's ruins, as it is somewhat grand and lavish, although this is not where the Number resided before a King's Coin and a statue of Kiraku was excavated - which the ethereal guardian; Ponta was sealed inside.

Ponta was originally a Tanuki (Japanese raccoon dog), who was befriended by Kiraku, and helped him in battles. After Kiraku learned that the nobles were not happy with him sharing the spoils of his victories with the peasants, he was forced to part ways with Ponta, knowing that he would lose his next battle. Ponta felt betrayed as a result. Unlike the other Number Guardians, Ponta was not killed, but his spirit was sealed in a statue of Kiraku. 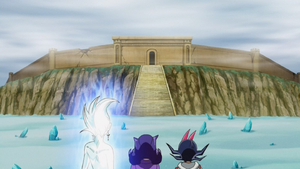 A unique ruin under water. These ruins have a blue color scheme where there is a maze that will eventually lead people to a platform where the Numbers sleep. Interestingly, due to the close proximity of the two ruins, it is hard to tell where one begins and the other ends. This is the last of the seven ruins, and it is the first to have two Numbers sleeping within it ("Number 73: Abyss Splash" and "Number 94: Crystalzero"). Both Numbers are being protected by the guardian named Abyss. 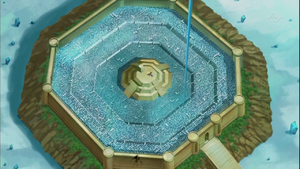 Top view of the "Under Sea Ruins"

Yuma and his group, this time without Kite, traveled to the ruins where there was a huge storm that they had to go through. Rio Kastle was called out by Abyss to the bottom of the ocean, with Shark, Yuma and Astral following behind. They arrived at an open space where they followed Rio's footprints towards a maze. Suddenly, the walls around them shifted, separating them. Shark was being led by Abyss after finding Rio's card on the floor. Shark arrived at a realm where he faced Abyss, who was possessing Rio and challenged him to a Duel. During the Duel, Shark was shown memories of his past life, which confused him greatly but thought it was just a distraction.