From Yugipedia
Jump to: navigation, search
This article is about the archetype. For the card often referred to simply as "Galaxy-Eyes", see "Galaxy-Eyes Photon Dragon".

"Galaxy-Eyes" (ギャラクシーアイズ Gyarakushīaizu in Japan, written as 銀河眼 in the Japanese anime) is a sub-archetype of the "Galaxy" archetype that is used by both Kite Tenjo and Mizar in the Yu-Gi-Oh! ZEXAL anime. They are also used in the Yu-Gi-Oh! ARC-V anime by Kite Tenjo's alternate universe counterpart. All members of this sub-archetype are LIGHT monsters, except for the DARK "Number 95: Galaxy-Eyes Dark Matter Dragon".

It was first supported by the anime effect of "Galaxy Zero", which was changed to support all "Photon" and "Galaxy" monsters in the OCG/TCG, and then by the anime-only "Neutrino Dowsing" (which however works only with the Xyz Monsters) and "Tachyon Flare Wing". With the release of Primal Origin, the archetype received support in the OCG, though the requirement of having 「銀河眼」 in the name was dropped. 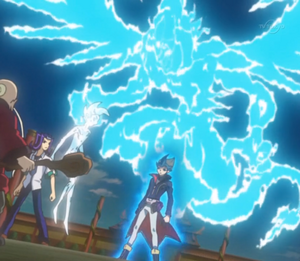 The aura of "Galaxy-Eyes Photon Dragon" around Kite Tenjo

When Jinlon's eyes glowed green for a moment, he saw the aura of "Galaxy-Eyes Photon Dragon" around Kite Tenjo.[2] There also exist "Neo Galaxy-Eyes" monsters which are the upgraded forms of these two dragons. They were both created with the use of energy from the Barian World; one was created when Hart Tenjo gave his brother the remainder of his powers, while the other was Summoned by "Rank-Up-Magic Barian's Force". Kite later found a tablet at Jinlon's ruins which said "Dragons of light and time, clash at thy place of birth. Then shall the eyes of the galaxies truly awaken for the first time, opening the gate to a new world.", and he was certain this has to do something with how to use the Numeron Code. This was eventually proven to be true, as both are needed to unlock the Numeron Code.