Jinlon is the spirit form and Number Guardian of "Number 46: Dragluon" in the Yu-Gi-Oh! ZEXAL anime. He was also Mizar's partner dragon in the past. 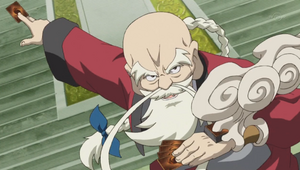 Jinlon's human form is a stout man with his most notable features being his long white beard and braided ponytail, tied at the end by a blue ribbon. His attire consists of a red and black ceremonial robe tied around at his waist which he wears over a gray shirt. He also wears dark green pants and sandals with white socks. He also sports a brown, carved walking stick which transforms into his Duel Disk when he Duels. His true form is "Number 46: Dragluon".

Jinlon can sense Dragon spirits such as "Galaxy-Eyes" and they respond to his dragon spirit. His eyes turn green when he is sensing them.

In the dub, Jinlon occasionally makes similes about animals.

Jinlon met Mizar after the latter's village was destroyed in a military strike. Having no where to go with the death of his parents, Mizar wandered into the desert and nearly died of dehydration. He came across the "Number 46: Dragluon" card and from it emerged Jinlon, who saved Mizar's life.[2]

Jinlon served Mizar in the past as his pet dragon and guardian of the land. He was later accused of a deluge that flooded the land by a wandering shaman which spurred the villagers to attack, only for Mizar to come to his defense. He was killed along with his master in a surprise ambush by a neighboring army to whom the shaman secretly worked for, which left the land open to the army's invasion (In the dub, Don Thousand also falsified their memories, making Jinlon believed that Mizar betrayed and assisted the villagers in killing him). He was eventually reborn as a Number's Guardian, while his master became a Barian with no recollection of his past life.[1]

After scaling a mountain, Yuma Tsukumo and his friends approached a temple which rested upon its peak. Upon entering the courtyard, Yuma was enticed by the aroma of cooking food, but he was quickly stopped by Jinlon who assaulted him with his walking stick. He then noticed that Kite Tenjo was a Dragon Tamer and their dragons resonated with one another. Jinlon mentioned that Kite was similar to "someone" who lived inside the palace long ago. When Astral inquired if the person was named "Mizar", Jinlon confirmed it and accepted Kite's challenge to see if the young man had what it took to earn the "Number". Jinlon began a Duel with Kite, with both sides putting their ace Dragons up as antes. Jinlon managed to get an early start, Xyz Summoning "Number 46: Dragluon" as well as protecting it with a combination of "Armed Protector Dragon" and "Dragon Shield". However, this was quickly overcome by Kite who used "Book of Moon" to get around his strategy. Jinlon quickly overcame his loss, Summoning "Soul Drain Dragon" with 8000 ATK, pushing Kite into a corner.[3]

Kite was able to get himself out of the dilemma and was ultimately able to defeat Jinlon. Jinlon then acknowledged Kite as a Dragon master and told him the legend of the ruins and Mizar's connection to it and him. As Jinlon awarded Kite the "Number", Mizar suddenly appeared and attacked Jinlon, angrily denying his connection to him and his apparent past life as a human. Jinlon transported Kite and his friends to safety, appearing to him in his true form and explained the ancient battle between Astral and Don Thousand that almost destroyed the Earth. He left his Mythyrian "Number" card to Kite, asking him not to let the battle repeat itself again.[1]

During Kite's second rematch against Mizar, Jinlon was Summoned by the latter. He revealed Mizar's true memories as a human to Kite.[2]

Jinlon plays a Dragon Deck, focusing on swarm and beatdown tactics centered on "Number 46: Dragluon", which enables him to negate the effects of his opponent's Dragons, and Summon additional Dragons of his own.