Chironex, also known as Kurage in the Japanese version, is a Barian in the Yu-Gi-Oh! ZEXAL anime, belonging to the Fearsome Four of the Dark Dueling World. He is the self-proclaimed best WATER Duelist. 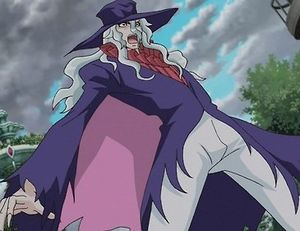 In his human form, Chironex appears as a tall man with long, sharp nails and long white hair. He wears a suit consisting of white pants, a striped, frilled red shirt, a tattered purple vest with a pink cape and a purple fedora.

In his Barian form, Chironex has turquoise skin and purple lips (which makes him, along with Heartland, the only Barian to have a moving mouth). His fedora and hair transform to resemble the bell and tentacles of a jellyfish, respectively, with some of the tentacles hanging in front of his face. He also possesses brown armor and has a red crystal just below his chest. His jellyfish motif makes him the only member of the Fearsome Four not to be based on an insect, but jellyfish are seen as pests in the same way as the others.

Chironex is arrogant, calling himself the greatest WATER Duelist. He also believes that the jellyfish is the greatest predator in the ocean.

Due to the aforementioned belief, Chironex prefers to be addressed as senpai (先輩; Senior in Japanese) and refers to his opponents as kōhai (後輩, junior in Japanese). When angered, Chironex's speech becomes extremely slurred (In the dub, he simply insults Shark's skill as a Duelist).

He is extremely passionate about WATER monsters, to the point that he insulted Shark for playing "Skull Kraken", as while it is an aquatic creature, it is a DARK monster.

Chironex has the ability to turn to and from his original form, a jellyfish. In his human form, he can extend tentacles from his sleeves to poison his foes. He also has the ability to appear and disappear at will, as well as turn invisible. When walking, Chironex's footsteps generate a small amount of water.

"Kurage" means "jellyfish". "Chironex" is derived from "chironex fleckeri", the scientific name of the sea wasp (a species of box jellyfish) which is the most venomous animal in the world.

Chironex was once the mentor of Mr. Heartland.[1] An underworld Dueling criminal, he was involved in a car accident while fleeing from the police. The accident resulted in the deaths of him and the entire Kastle family.[2] Chironex was eventually reincarnated as a Barian.

Chironex was one of the Fearsome Four of the Dark Dueling World. He was sent to Earth with the other members to gather the "Numbers" by Vector.[3] 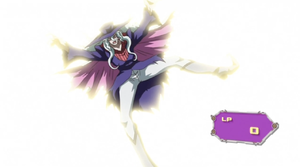 After Erazor's defeat at the hands of Yuma Tsukumo and Trey, Vector ordered Mr. Heartland to send Chironex after Shark, as both were WATER Duelists. To this end, Chironex infiltrated the hospital where Shark's sister Rio was staying. He infected her with jellyfish poison in order to lure out Shark. He cornered him at his old house and infected him as well, wagering the antidote on a Duel and musing that Shark looked familiar. They were interrupted by Quattro, who joined the Duel on Shark's side, with Chironex having 8000 Life Points and both Shark and Quattro having 2000. Chironex brought out "Number 4: Stealth Kragen", inflicting 1600 damage to Shark. Quattro countered with "Number 15: Gimmick Puppet Giant Grinder".[1] With aide of Quattro's "Celestial Strings", Shark was able to defeat Chironex with "Number 73: Abyss Splash". Quattro proceeded to take his "Number", while Chironex recalled that Shark was in the car that he crashed into years ago and then shockingly stated that since he was the only survivor, that Shark couldn't be standing before him right now.[2]