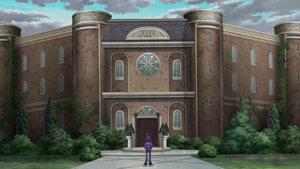 Exterior of the mansion.

The Kastle's mansion is an abandoned building, located in Heartland City. It was home to the Kastle family prior to them dying and the souls of the Barians Nash and Marin being transferred in Reginald and Rio Kastle's bodies.

One night, Rio stole Reginald's Deck, causing Reginald to chase after her to reclaim it. During this, they accidentally knocked a suit of armor which almost fell on Rio. However, Reginald managed to push her out of the way, acquiring a scar on his right shoulder from where the armor cut him.[1]

Reginald later revisited the house and remembered the night when he was scarred. After this, he was attacked by Chironex. Reginald broke through a window to escape, but Chironex caught him in his tendrils and infected him with poison. The two were soon joined by Quattro outside the mansion. They then began a Tag Duel against Chironex.[1]