The Ocean of Otherworlds is a dimension shown in the Yu-Gi-Oh! ZEXAL manga. 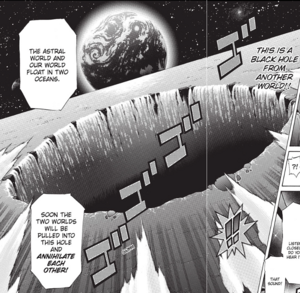 When Kyoji Yagumo triggers his device in the Heartland New Tower with the power of his "Numbers", Yuma, Astral, Shark, Kaito, Luna, Orbital 7 and the Numbers Club are pulled into this dimension together with Kyoji. As soon as they arrive there, they notice a huge black hole in the ocean. Kyoji explains that the Astral World and our world float in two oceans of otherworlds, and the black hole would pull both worlds in and they would crash, annihilating each other.[1] The black hole soon starts pulling Yuma and co. as well, while Kyoji prepares to leave with his spider legs-like wings. However, Astral, who had regained his powers, materializes a gigantic boulder out of thin air to cover the hole. Yuma, Astral, Shark, Kaito and Kyoji then get over the boulder and initiate a Duel, while Luna and the others watch them floating.[2]