Devon Knox, known as Daisuke Katagiri in the Japanese version, is a character appearing in the Yu-Gi-Oh! ZEXAL anime. He is a Pro-Duelist, who was under the control of the heralds of the Barian World.

An alternate universe version of Devon appears in Yu-Gi-Oh! ARC-V.[1]

While using the power of the card, "Rank-Up-Magic Barian's Force", Devon has a Barian Emblem on his forehead. Also, while Dueling like this, Devon is able to Duel without a Duel Gazer. Instead, his left eye changes to red. Also, he bears an orange D-Pad, along with a gauntlet similar to Quattro's.

Devon is shown to be a very kind person, enjoying Dueling with his fans and signing autographs. When Girag brainwashed him, his personality changed drastically and he became very violent and brutal, going as far as to attack Ray while he was hurt and then maniacally laughing. When he was defeated by Yuma, his personality went back to normal.

In his normal state, his catchphrase after winning a Duel is "Enjoy Duel!". Devon also has a habit of saying "Enthusiastic" (, Nekketsu).

In the dub version, sometimes he does teaching-puns 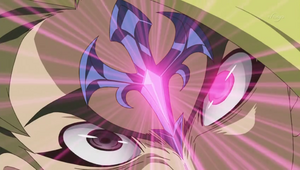 Devon appeared at Heartland Academy, signing autographs for his fans. He was very popular with the female students in particular. Yuma Tsukumo wanted to meet him. After signing autographs, he Dueled Bronk Stone and four other students at once, defeating them with "Armed Samurai - Ben Kei". When he goes to his locker room, he was met by Girag, who brainwashed him to fight for the Barian World using "Rank-Up-Magic Barian's Force". He immediately searched for Yuma, but was met by Ray Shadows instead. He Dueled and defeated Ray with "Coach Captain Bearman". Yuma arrived and immediately began a Duel with him. Yuma played defensively at first, but Devon countered with an aggressive strategy with "Coach" monsters before bringing out "CXyz Coach Lord Ultimatrainer". Yuma countered this with "Number C39: Utopia Ray", defeating him. His brainwashing evaporated after the Duel and he appeared not to remember what had happened.[2]

He reappeared on an advertisement for the Pro Duelist Spartancity Tournament.[3]

Devon uses a "Coach" Deck focused on inflicting large amounts of damage in one instance, whether that be through cards with ATK boosting effects such as "Armed Samurai - Ben Kei" or through the effect damage abilities of his Xyz Monsters.

His Deck also contains at least four Equip Cards which he used to power up "Ben Kei" and an unspecified Trap Card used in the same Duel.