"Hard Knox", known as "I'm Here, Thinking for the Best! My Name Is Rei Shingetsu" in the Japanese version, is the seventy-sixth episode of the Yu-Gi-Oh! ZEXAL anime. It first aired in Japan on October 21, 2012 and in the United States on August 31, 2013.

A new student has transferred to Yuma's class. His name is Ray Shadows and has become huge fan of Yuma due to his winning the WDC. Everyone at school is psyched at the arrival of the Pro Duelist Devon Knox, who is going to a special lesson. Feeling bad for Yuma, who's banned from attending the special lesson (in the dub, he didn't sign up for the class), Ray runs off to get Devon's signature. But, what awaits Ray is a "Coaching" under the instruction of Devon, who is being controlled by the Barian faction!

The full Duel is not shown. The female student activates "Madolche Chateau" at one point, while Devon activates a Trap Card. Eventually, Devon is shown to control "Armed Samurai - Ben Kei" in Attack Position with 7800 ATK (

4/500 → 7800/800) as well as at least four Equip Cards equipped to it, allowing "Ben Kei" to attack five times (one normal attack and one additional attack for each Equip Card equipped to it). "Ben Kei" attacks all five students directly (Both Bronk and four unnamed students: ? → 0 LP).

8/2600/2700) in Attack Position and has an unspecified amount of Life Points, while Ray controls no cards and has 1500 Life Points.

Turn 1: Yuma
Yuma draws. He then activates "Three Card Summon" to reveal three Level 4 or lower monsters with the same Level in his hand and Special Summon one of them. Yuma reveals "Mimimic", "Rai Rider" and "Zubaba Knight" and subsequently Special Summons "Rai Rider" (

Turn 2: Devon
Devon draws. He activates "Training Grounds", which will let him send two monsters from his hand to the Graveyard in order to Normal Summon one Level 7 or higher monster without Tribute. Devon then activates the effect of "Training Grounds" to send "Panther Warrior" and "Coach Soldier Wolfbark" from his hand to the Graveyard and Normal Summon "Coach Captain Bearman" (

4/1600/1200) in Attack Position. Devon activates the effect of "Coach Captain Bearman" to double the Levels of all Level 4 or lower Beast-Warrior-Type monsters he controls until the End Phase (both "Coach Soldier Wolfbarks": 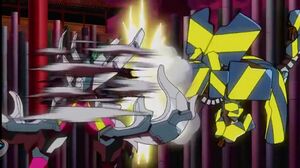 "Coach Lord Ultimatrainer" attacks and destroys "Terror-Byte" as the second effect of "Rank-Up-Magic Barian's Force" allows the Special Summoned monster to negate the effects of monsters that would prevent their destruction by battle. Devon activates the second effect of "Coach Lord Ultimatrainer" to detach all its Chaos Overlay Units ("Ultimatrainer": 4 → 0 ORU) and force Yuma to draw a card for every Chaos Overlay Unit detached and reveal it before sending the drawn card to the Graveyard. If a drawn card is a Level 4 or lower monster, Yuma will take damage equal to its ATK. Yuma draws the Level 3 "Achacha Archer" (Yuma: 2400 → 1200 LP), "Wonder Wand", the Level 4 "Kagetokage" (Yuma: 1200 → 100 LP) and the Level 3 "Dotedotengu", which has 0 ATK.