"Counter Offensive: Part 2", known as "Roar! Chaos Numbers - The Final Blow Aimed at Yuma" in the Japanese version, is the eighty-sixth episode of the Yu-Gi-Oh! ZEXAL anime. It first aired in Japan on January 13, 2013 and in the United States on November 9, 2013.

Yuma and Alito continue their Duel as Alito Summons his own "Number", Yuma and Astral cross and use ZEXAL. Touched by Yuma and Astral transforming to get real serious, Alito transforms to his own original Barian form and counterattacks.

Turn 6: Yuma
Astral and Yuma perform ZEXAL Morph. Yuma draws "Xyz Treasure" and subsequently activates it to draw two cards (one for each Xyz Monster on the field). Yuma overlays "Utopia" with itself via Chaos Xyz Evolution in order to Xyz Summon "Chaos Number 39: Utopia Ray" (

4/2500/2000) in Attack Position with its effects negated and forbidding it from attacking this turn (as an Xyz Monster was destroyed by battle and sent to the Graveyard this turn). Alito activates his own face-down "Xyz Stand" to revive "Battlin' Boxer Star Cestus" (

5/2000/1200) without Tribute via its own effect as Alito has 2000 or more Life Points than Yuma. He then activates the second effect of "Eagle Claw" to equip it to "Utopia Ray" and increase its ATK by 2000 ("Utopia Ray": 2500 → 4500 ATK). "Utopia Ray" attacks "Battlin' Boxer Comet Cestus", but Alito activates the effect of ""Battlin' Boxer Counterpunch" to banish it from his Graveyard in order to activate "Battle Rush" from Yuma's Graveyard as his card, which will prevent "Battlin' Boxer Comet Cestus" from being destroyed by battle and inflict the battle damage Alito would take to Yuma instead. Yuma activates the last effect of "Eagle Claw" to negate the effect of "Battle Rush" as the equipped monster is battling. As Yuma activated an effect during the Battle Phase, Alito activates his face-down "Corkscrew Counter" to negate the effect of "Eagle Claw" and destroy it as well as inflict 500 damage to Yuma. Yuma activates his face-down "Last Chance" (as his opponent activated a Counter Trap Card) to activate "Counter Clash" from Alito's Graveyard as his card, which negates and destroys "Corkscrew Counter" and doubles the battle damage taken from this battle. "Utopia Ray" then destroys "Battlin' Boxer Comet Cestus" (Alito: 2800 → 0 LP). 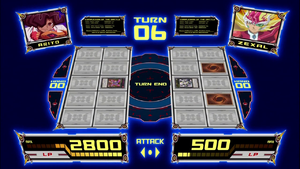