"You Give Love a Bot Name", known as "Obomi Rescue Operation!? I In Love Am Invincible" in the Japanese version, is the ninetieth episode of the Yu-Gi-Oh! ZEXAL anime. It first aired in Japan on February 10, 2013 and in the United States on December 7, 2013.

Orbital 7 is sent to gather data on the Barians by Kite. After a chance encounter with Lillybot, he falls in love with her. Believing that Yuma must be mistreating her, he challenges him to a Duel.

4/1200/1600) in Attack Position. He then activates the effect of "Robocircus" to Special Summon "Super Defense Robot Elephan" (

8/3000/2500) in Attack Position (as "Googly-Eyes Drum Dragon" is a Machine-type Xyz Monster). As "Googly-Eyes" was Special Summoned from the Graveyard, it gains the effect of increasing its ATK by 1000 for each Overlay Unit it detaches.

3/800/1200) in Attack Position. He then activates the effect of "Robocircus" to Special Summons another copy of "Super Defense Robot Monki" ( 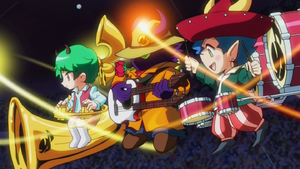 "Melomelody the Brass Djinn", "Temtempo the Percussion Djinn" and "Muzurhythm the String Djinn" Summoned together.