"Take a Chance", formerly known as "Sibling Rivalry" and known as "Shark vs. Rio - The 100th Squabble Duel" in the Japanese version, is the ninety-first episode of the Yu-Gi-Oh! ZEXAL anime. It first aired in Japan on February 17, 2013 and in the United States on December 14, 2013.

On the way to school Bronk is helped with an injury by Shark's little sister, Rio. Bronk becomes love-struck by Rio's gentleness. Yuma and the Numbers Club are in an uproar over Bronk's first love! At first, Bronk challenges Shark to a Duel in order to win her brother's permission, but he flat out declines. Remarks from Flip and Caswell lead to a huge misunderstanding, that results in the worst sibling quarrel in the history of the entire world!!

Yuma is running late to school and meets Bronk on his way. Bronk goes ahead of Yuma but a flock of ducks come by. He pushes his skateboard down to decelerate, resulting in him being thrown from his board but avoiding the ducks. Then, Rio arrives and asks if he is well, noticing the scrape Bronk received in his accident. Bronk gets to his feet and answers positively. As Rio helps with Bronk's injury by tying her handkerchief around his arm, he is surprised by her kindness. Bronk thanks Rio and Rio leaves for school with Bronk moved by Rio's concern. Yuma and Astral go to school on Bronk's skateboard.

At lunch time in the classroom, Bronk is still love-struck by Rio, and his friends are at an uproar of what he should do. Everyone is attempting to dissuade him, but Ray suggests if he Duels Shark and wins, he could date Rio without any problems. Bronk then fantasizes about beating Shark and he and Rio embracing at their wedding. 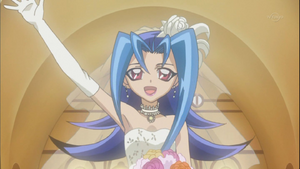 Bronk rushes out to go and Duel Shark. Yuma wonders what is happening. Shark, who now knows of Bronk's intentions, refuses the Duel, saying Bronk would never be able to beat him, then saying that he is not even at Yuma's level. Bronk greatly misunderstands Shark's words and thinks that Yuma is dating Rio. Caswell and Flip hear this exchange. 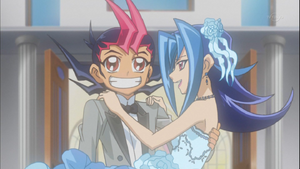 Bronk then has a fantasy where Yuma and Rio are to be wed and all their friends are there for the wedding, with Astral flying around them. He then drops to his knees and thinks that Yuma is the only one that Shark will accept as Rio's boyfriend. Caswell and Flip are surprised. 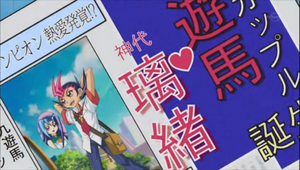 The next day, a story is printed in the school publication on how Yuma and Rio are allegedly dating and that he is the only one Shark approves of. Many boys are crying, now that Rio is apparently in a relationship. The story is the most discussed topic in the school. Tori is surprised, but Caswell and Flip say that they heard it from Shark. Caswell says that Rio and Yuma are "a most sensational couple", which angers Tori and Cathy. 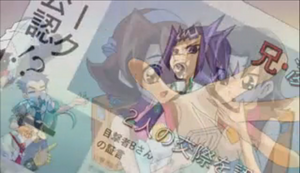 The article in the school paper.

Bronk calls Yuma to the roof to talk about Rio. Yuma is oblivious to Bronk's misconceptions and does not even know about the story. Bronk speaks about how he sees Yuma as his best friend. Bronk then says that if Yuma breaks Rio's heart, there would be consequences. Yuma still does not understand, but Bronk continues. Bronk says that Shark approves of. Then Rio appears, and from what she has heard, assumes that Shark began the rumor. Everyone goes to the tennis court to confront Shark. At the tennis courts, Rio talks to Shark telling him that this is not okay, Shark responds by saying that he has no idea what Rio is talking about. He starts to leave, but then Rio mocks him by telling everyone that he has a strange fear of onions and peppers and threatens to tell Flip to blog about it all over the school net, causing Shark to stop and duel Rio.

After the duel, the truth is told as Shark says that he will duel Bronk, if he was at Yuma's level of dueling, shock the latter himself. Hearing the truth, both Caswell and Flip realized that they misunderstood the conversation. Bronk asked Rio to have a duel, which she accepts. Before Caswell and Flip sneak off, they were asked by Rio to have time to talk, which shook them in fear and run off (the dubbed version of the episode ends just before they run off). Yuma asked what was the Dueling squabble all about, but was told by Tori and Cathy that there is no need to know as they pinch his butt cheeks, while Yuma has no idea about it. 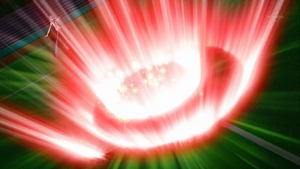 3/200/1000) in Attack Position via its own effect. He then overlays "Big Jaws" and "Shark Stickers" in order to Xyz Summon "Submersible Carrier Aero Shark" ( 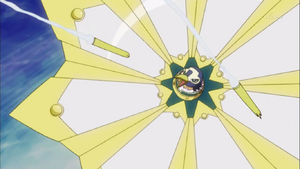 4/0/1200) from her hand in Attack Position. Shark activates "Aqua Gate", which will let the turn player to negate a number of their opponent's attacks up to the number of Set cards in their Spell & Trap Zones. Shark Sets two cards.

4/1500/1500) in Attack Position. She then overlays "Blizzard Falcon" and "Guard Penguin" in order to Xyz Summon "Ice Beast Zerofyne" (

As a WATER Xyz Monster he controls was destroyed by battle, Shark activates his face-down "Ghost Salvage" to revive "Submersible Carier Aero Shark" ( 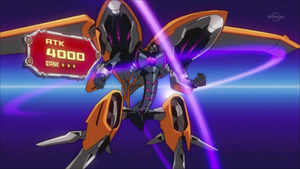 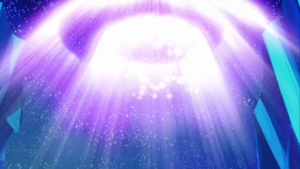