Carlyle Chesterton, known as Mamoru Jinguji (神宮寺守 Jingūji Mamoru) in the Japanese version, is a character appearing in the Yu-Gi-Oh! ZEXAL anime. He is a student at Heartland Academy and head of the Student Council.

Carlyle has dark-brown hair with lighter-brown bangs, as well as green eyes. He is the first character in Yu-Gi-Oh! ZEXAL who is seen wearing the third-year uniform: a white shirt with blue-lined sleeves and collar, a blue tie, blue pants, and a pair of brown shoes. Signifying that he is the student council president, he has a sash around his right arm. Carlyle bears a striking resemblance to Sylvio Sawatari from Yu-Gi-Oh! ARC-V.

His actual personality is quite similar to that of Caswell Francis's, sticking to the rules, even before being under Girag's control.

While being brainwashed by Girag, he appears to show jealousy towards Yuma due to his popularity for winning the World Duel Carnival. During his Duel with Yuma, he tried to get Caswell to make exceptions from his rules of the Duel, reminiscent of dirty politics. 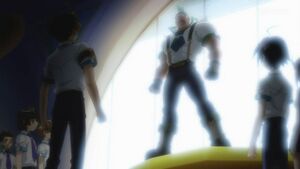 Carlyle was brainwashed by Girag along with the rest of the student council. Shortly afterward, Yuma replaced Caswell as a member of the student council thanks to Ray Shadows. Caswell was disappointed and Carlyle decided to lure Yuma into a trap by taking advantage of this. He appointed Caswell as the special disciplinarian and Caswell started using his position to harass the other students (even to the point where he was punishing girls for wearing their school uniforms in the Japanese version). This eventually led Yuma to barge into the student council's office and demand that Carlyle do something about Caswell. Carlyle said they should settle it with a duel, but they would have to use the "school rules" ("suspending" monsters with inappropriate clothing by returning them to the hand etc.). Carlyle managed to gain the upperhand with cards to ensure his monsters adhere to the school rules like "Mirror Stage of Discipline". However, Yuma managed to talk some sense into Caswell and so he stopped enforcing the school rules on their duel, enabling Yuma to win.

During the Heartland Academy Festival, he was overseeing booths that are registered and non-registered. He caught Flip Turner with a booth behind the school that was not registered.[1]

Carlyle uses a Priest Deck. His strategy is centered towards the Summon of his "Norito the Moral Leader", using his influence over Caswell Francis, he exploits the school's rulebook to only affect his opponent.