From Yugipedia
Jump to: navigation, search
For the similarly named card, see "Iris, the Earth Mother".

Iris is a character in the Yu-Gi-Oh! ZEXAL anime.

Iris resembles a younger version of Rio Kastle in many aspects; only the color of her hair (which is green) and her eyes (which are blue) differ from her. 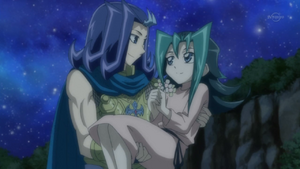 Iris lived in ancient times, by the same period Reginald Kastle was Nash in his past life. She was a survivor of a town devastated by Vector, and was found by Nash's army,[1] who took her with them and looked after her. Nash noticed the striking resemblance Iris had with his deceased sister Marin, and wondered if Iris was either sent to him by Marin or was Marin herself. Due to this, he grew close to her. One day, when Nash departed to confront Vector by himself, Nash's army went after Vector to fight alongside their king, with Iris coming as well. However, even though Nash defeated Vector, Iris was killed along with the rest of Nash's army. After learning this, Nash took Iris' body in his arms, and cried for her and his army's lives, while their souls were absorbed into Barian World.[2] When Shark was reliving his memories from this life, Dumon transported him, as well as himself and Rio to Barian World where Iris was shown to be living alongside Nash's soldiers, happy to see her king once again.[3]