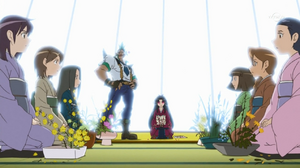 The Floral Design Club, known as the Ikebana Club in the Japanese and Italian versions, is a club within Heartland Middle School in the Yu-Gi-Oh! ZEXAL anime. It is based on ikebana. The club is led by Lotus Hanazoe.

The club was brainwashed by Girag in order to acquire the "Numbers"; however, Rio Kastle was able to defeat its leader, Lotus, and, subsequently, everyone returned to normal.

The members of the club later appear during Heartland Academy Fun Fair, holding an ikebana event.