From Yugipedia
Jump to: navigation, search
For the card, see "Emperor's Key" (card).

The Emperor's Key (の Ō no Kagi), sometimes shortened to the Key in both versions and also called the Golden Key in the dub, is a pendant that originated from the Astral World in the Yu-Gi-Oh! ZEXAL series.

It is currently in possession of Yuma Tsukumo and he uses it to summon Astral, which is similar to that of when Yugi Muto transforms into Yami Yugi with the power of the Millenium Puzzle (both items are also similar in that their owners are frequently shown wearing them around their necks, and they have been stolen from their respective owners on one or more accounts, only to be later recovered). The Key has an inside world which is the "pocket dimension", in which Astral spends most of his time. It has the power to subdue the influence of a "Numbers" and can open The Door. 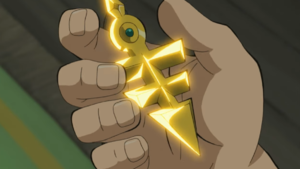 Close-up of the key. 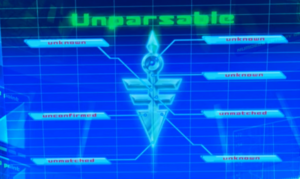 Orbital's analysis of the key.

The Key appears as a key with golden curves and a ring on top, allowing it to be worn around the owner's neck. It also has a green gem, which contains the "pocket dimension".

Within the Emperor's Key is a pocket dimension where Astral spends most of his time.[2] In case the Key is taken from Yuma or Yuma loses it, Astral will be trapped inside this dimension if he is within it.[3] However, that won't be the case if he is outside of the Key.[4][5]

The pocket dimension within the Emperor's Key.

The pocket dimension is made up of energy similar to Astral World with floating particles along a white desert covering the whole place and in the air is a huge green airship. Gaining access to this world requires going through The Door.[6] Kite Tenjo was able to get to the pocket dimension by using a Baria Crystal.[7]

In the middle of the pocket dimension is the Different Dimension Airship, where Astral resides. 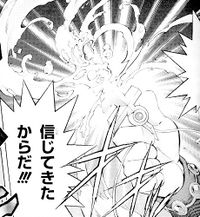 The key is very resilient and can even repair itself under certain circumstances.[8][9] 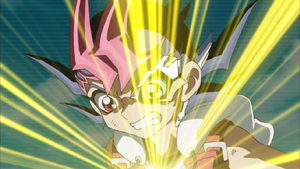 The key failing to suppress the power of the "Chaos Number".

The Emperor's Key gives the user some resistance to the influence of the "Numbers".[10][3] It has at least once failed to fully suppress the power of a "Chaos Number", For example: When Yuma took control of "Number C32: Shark Drake Veiss" via "Rivals Unite", it was causing him great pain until Shark used "Underwater Snow Prison" to banish it from the field.[11]

A diabolical door has haunted Yuma in his dreams trying to convince him to open it. The Emperor's Key was also the key to open that door, which released both Astral and the "Numbers"; and to do so, the broken key restored itself.[8] When the Key got separated from Yuma, a voice said that "Astral is immersed in the guidance of time" and that he must obtain the power of "ZEXAL". The voice described it as a power that turns all darkness into light.[3] The Key has the power to release the alternate form, of a "Number" - "Chaos Number".[12]

The "Numbers" have power inside the Key, as when Astral sent "Number 39: Utopia" off, the Key fired the card out of the Key and into Yuma's Extra Deck.[13]

Additionally the key has the power to make Astral visible to anyone when it radiates strong energy, such as during Yuma's Duel against Fortuno[12], and when Yuma's friends were able to see Astral inside the cockpit of the Different Dimension Airship.[14] 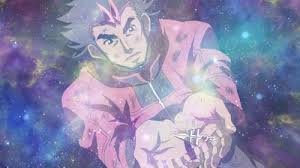 Kazuma obtains the Emperor's Key from the edge of the world.

Kazuma Tsukumo received the Emperor's Key from a being similar to Astral. This caused him to see an attack occurring in Astral World. Kazuma later passed the key on to his son, Yuma.[5]

Yuma held onto the key as a keepsake of his traveling parents and usually wore it around his neck. He felt that the key opened many possibilities and made him think he could take on any challenge. Despite this, Yuma suffered nightmares about a demonic door, telling him that whoever opened it would receive great power at the cost of a great risk. The key would light up during these dreams.[8]

One day, Yuma confronted Reginald "Shark" Kastle at school, over him stealing Bronk Stone's Deck through an ante. During the encounter, Shark noticed Yuma's fondness of the key, so he swiped it. He proceeded to break it in front of Yuma and throw a piece away. Bronk managed to find the piece Shark threw away and later returned it to Yuma.[8]

The next day, Yuma confronted Shark in a Duel. Before they began, Yuma held up the piece of the key Bronk returned to him, and as he demonstrated his confidence, the other part of the key was transported from his house to his hand and the key repaired itself. Yuma was transported to the door from his dreams and this time, he inserted the key. The door was unlocked releasing Astral. Yuma then returned to his Duel, with Astral by his side.[8] 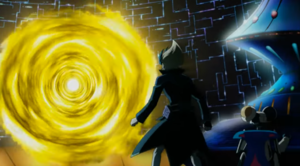 Kite and Orbital open the doorway into the key.

The key granted resistance to "Numbers" when Number 96 tried to take "Utopia" from Bronk Stone by force, and when Bronk Summoned "Utopia".[10] When Shark had the Key and took control of Kite Tenjo's "Acid Golem".[3]

Yuma being sucked into the key.

However, the Key was unable to fully suppress the power of a "Chaos Number" when Yuma took control of "Number C32: Shark Drake Veiss". Though the "Chaos Number" did not possess him, the connection to it weakened Yuma and surrounded him in a dark aura which was eventually electrified, causing him great pain. Vetrix pointed out that if Shark did not do something, Yuma would be taken over by the "Number" like he was.[11] 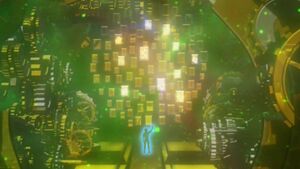 Kazuma in front of the "Number" pillars

The original wielder of Key, Kazuma Tsukumo, also has power over the Key as well. He mysteriously appeared in the Key and used the power of the 12 collected "Numbers" to break Trey's influence over Yuma, allowing him to regain his "kattobingu".[15] Kazuma later returned to tell the revived Astral that his son is calling him for help.[16] 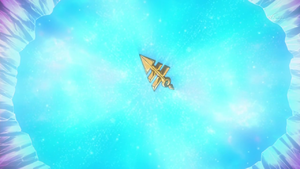 The Emperor's Key falls into the Astral World.

When Yuma Dueled against Fender, Astral (who was in the key) was electrocuted at times when Yuma's Life Points went down.[17] When Yuma and Ray Dueled against Girag, Yuma threw the key out of the Barian's Sphere Field to Tori once Astral was weakened from the effects of the field.[18] After their Duel with Number 96, Astral was forced to return to Astral World and the key went with him, falling through the portal.[19]

Later on after Yuma's Duel against Eliphas concluded with the former's victory, he returned the key to Yuma.[20]

After meeting up with Reginald Kastle after he and Rio Kastle sided with the Seven Barian Emperors, the Emperor's Key reacted with Nash's Barian Emblem, letting Yuma observe Nash's past life while Nash witnessed the events that Yuma had been involved with in Astral World.[21]

In the Key's pocket dimension, Astral and Kazuma discussed Yuma's future and the upcoming ceremonial Duel.[22] 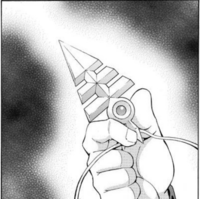 The key in Manga.

During a conversation with Kotori, Yuma clarifies that his parents, specifically his mother, passed it to him, which became an amulet that trusts him to do anything he puts his mind on. 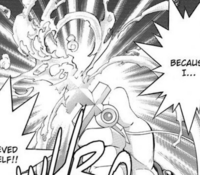 The 'broken' key restores itself.

Later on, later, they find Tetsuo has been forced to Duel a guy nicknamed Shark, and after being defeated, he takes Tetsuo's Deck. Yuma confronts him, but Shark takes his key and breaks it in half. However, during the duel with Shark, when Yuma decides to believe in himself, the broken key restored itself and allowed Yuma to uses it to open The Door, which releases Astral and the "Numbers".[9][23]