As a child, Takahashi liked to draw, but did not start putting manga together until he was in high school.[1]

When he was 19, one of Takahashi's manga stories won a contest in a shonen manga magazine. He considers that to be his debut, but for the next ten years he went through several publishers and had a lot of rejected stories.[2]

Takahashi worked for a game company, but aspired to create manga. In 1990, he managed to create 100 pages of manga and 200 pages of sketches before bringing his first proposal to Weekly Shōnen Jump. The editor he met was bothered by the size of his submission, but read through all of it and understood that Takahashi wanted to do a battle story. In the end that manga idea was rejected.[3]

His first work was Tokio no Tsuma, published in 1990. One of his earliest works was Tennenshokudanji Buray (天然色男児BURAY), which lasted for two volumes and was published from 1991 to 1992. Takahashi did not find success until 1996 when he created Yu-Gi-Oh!.

Takahashi's popular Yu-Gi-Oh! manga started the creation of the Yu-Gi-Oh! cards, known within the series as Magic and Wizards and later Duel Monsters. However, he never intended to focus his manga on the card game he created. The original format of the manga was set in episodic chapters with a different game being played in each chapter, and the Magic and Wizards card game was originally intended to only appear in two chapters. Shueisha, the publisher of the Weekly Shōnen Jump magazine, received so many letters and fan-mail asking about the Magic and Wizards game that Takahashi decided to extend it.[1]

Takahashi compiled various Yu-Gi-Oh! illustrations he had drawn into the book Duel Art which was published on December 16, 2011.[5]

Takahashi has mentioned a number of things which may have inspired him to become a mangaka. One of them was a kamishibai he used to enjoy going to when he attended elementary school. During the show, he would wonder if the old man hosting it, drew all the pictures himself.[7] Another was an event that occurred in his first year of high school. An unfriendly teacher compared him to a defecating machine in front of the class. His classmates laughed, but Takahashi clenched and fist and thought to himself that a defecating machine could not create comics.[8]

Takahashi decided to use battle as his primary theme. However there had been so much "fighting" manga, he found it difficult to come up with something original. He decided to create a fighting manga, where the main character doesn't hit anybody, but struggled with that limitation. However when the word "game" came to mind, he found it much easier to work with.[9]

Takahashi had always been interested in games. He claims to have been obsessed as a kid and still interested in them as an adult. In the games he considered the player to become a hero. He decided to base the Yu-Gi-Oh! series around such games and used this idea as the premises; Yugi was a weak childish boy, who became a hero when he played games.[1]

He admits that it is difficult to come up with many unique monsters. He tries to fit the player's characteristics into the creature he is creating, such as giving Seto Kaiba vicious cards to suit his personality.[1]

With friendship being one of the major themes of Yu-Gi-Oh!, he based the names of the two major characters "Yūgi" and "Jōnouchi" on the word yūjō (友情), which means "friendship".[1] Henshin, the ability to turn into something or someone else, is something Takahashi believed all children dreamed of. He considered Yugi's henshin Yami Yugi, a savvy, invincible games player, to be a big appeal to children.[1] The character Seto Kaiba is partly based on an arrogant collectible card game player Takashashi heard of.[10]

Takahashi was ill at the time of writing the Pharaoh's memory arc. He ended up in the hospital and struggled to meet deadlines. As a result, he reluctantly cut short Priest Seto and Kisara's story, which he regrets as it was to explain the relationship between Seto Kaiba and the "Blue-Eyes White Dragon". He also joked that the design of Zorc Necrophades was due to his grogginess at the time.[12]

Sometime during the original run of the pre-Trading Card manga, Takahashi had his handbag stolen by a thief during a night when he played Pachinko. The thief was never caught and included in his bag were further ideas for stories for the originating manga; he expressed some desire to recall and remember the ideas that were lost since.

He credits his unmet expectations from seeing Mazinger Z Vs. Devilman in his childhood as an inspiration for the film Yu-Gi-Oh! VS. GX. Although the film wasn't made, elements from it were used in the second season of Yu-Gi-Oh! GX.[13] 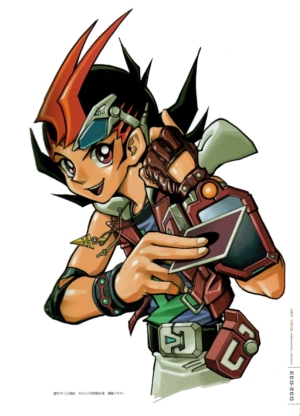 Over the years, he has also drawn official card artwork for numerous cards (existing and original), all of which bear his signature.

Takahashi considers himself to be a procrastinator. He doesn't work until close to a deadline, at which point he always ask himself why he didn't start working earlier.[15]

Takahashi and Mike Mignola, the creator of the Hellboy comic book series, once participated in an art exchange. Takahashi, who is a fan of American comics, drew a picture of Hellboy with Yugi Mutou's hairdo, the Millennium Puzzle, and a Duel Disk. Mignola drew a picture of Hellboy wearing the Millennium Puzzle and a Yugi t-shirt, and the two exchanged their artworks. He also collaborated with Yosh Sawai by sending him a picture of Yugi that was used in the manga Bobobo-bo Bo-bobo (Bobobo makes Yugi come out of his afro). In return, Takahashi included the 'nu' handkerchief in one of the panels in Yu-Gi-Oh! during the Egypt arc.