3,000 years before present day events (5,000 in the dub), the Millennium Pendant and the other Millennium Items were forged in Kul Elna by sacrificing 99 souls of the Kul Elna villagers. The items were created in order to protect Egypt from attackers. Pharaoh Aknamkanon was given the Pendant, while six priests were given the other six items. Together, they fought off the attackers and saved Egypt.

After Aknamkanon became aware of how the Items were created, he fell ill and died shortly afterward. The Pendant was inherited by his son Atem.

The Pendant was later stolen from the then teenage Atem by Thief King Bakura, who used it and the other Millennium Items to Summon Zorc Necrophades.

Atem defeated Zorc at the cost of his own life. He used his name as part of a spell that sealed Zorc's soul and his own into the Millennium Pendant, which was shattered and was laid to rest in his tomb. Atem's memory, including his name, was wiped, so that he could not recall the spell, so that the binding could never be undone.

The Millennium Puzzle had been discovered by a team of British archaeologists in the Valley of the Kings at the beginning of the 20th century. Each of them suffered mysterious deaths, with the last one uttering "The Shadow Games" with his dying breath.[1][2]

The box containing the Puzzle's pieces had two messages written on it, "The person who solves this puzzle will have their wish granted." and "The one who solves me, will receive my dark knowledge and power."

In the 1960s, Solomon Muto retrieved the Millennium Puzzle, in the Tomb of the Nameless Pharaoh, who was Atem.[3] Over the years, no one had been able to assemble the puzzle, which led Solomon to believe that the Puzzle was simply impossible. Solomon's grandson, Yugi, found the puzzle in the family game shop and spent eight years trying to solve it. Solomon repeatedly tried to convince Yugi to give up on the puzzle, with no success. He also feared that the Puzzle contained the power of the Shadow Game so he hoped Yugi would never solve it.[1]

Yugi managed to solve the Puzzle, while under the pressure of getting money to pay Ushio's self-imposed bodyguard fee.[1][2] After solving it, his body bore host to part of Atem's soul, known as Yami Yugi.

Yami Yugi was able to take control of Yugi's body while Yugi had the Puzzle. Yugi often wore the Puzzle around his neck on a brown rope and later a silver chain with links, allowing him to easily get Yami's help, usually to play games, particularly Duel Monsters.

When Dark Yugi (Yami Yugi) played a dice game Shadow Game with the ZTV director, he used the Millennium Puzzle to block a die that the director threw at his face. This broke the die in two, causing it to land on both 1 and 6, which totaled 7. Being a "lowest roll wins" game, this caused the director to lose.[4]

When Yugi was searching for Jonouchi (Joey), who he feared was in danger, he asked the puzzle to help him find Jonouchi. This caused Dark Yugi to take control and track down Jonouchi at Hirutani's torture chamber. Dark Yugi used the puzzle as part of a trap in the Landmine Search Network game with Hirutani's gang; he hung it over an unconscious gangster's forehead, causing rainwater to drop from it onto his head, waking him up and making him drop his stun gun in a puddle, electrocuting the gang.[5]

Mokuba Kaiba played Russian Roulette Dinner against Yugi and Jonouchi. Dark Yugi realized that Mokuba was cheating by using a hidden switch in a syrup bottle, so he attached the Millennium Puzzle to the turntable, so that it smashed the syrup bottle as it spun.[6]

The Puzzle was later shattered by Mr. Clown in the manga or Bandit Keith in the anime. Yugi managed to reassemble the puzzle while the building he was in was on fire, as he couldn't bear losing Yami Yugi.

After Yami Yugi collected the Egyptian Gods and presented them to the tablet, he was sucked into the Ultimate Shadow RPG, which was a replay of his life in Ancient Egypt. Yami Yugi was the player, while Atem was one of his characters, both of whom had the Millennium Puzzle.

As the RPG replayed Atem's life, Thief Bakura managed to steal it again. He once again gathered the Items and Summoned Zorc the Dark One.

After the RPG, Yugi once again had the Puzzle, which was laid to rest, before the Battle Ritual. After the battle the Puzzle, along with the other items, was destroyed.

The Millennium Stone was excavated and fragments of the Puzzle were found. Seto Kaiba attempted to reassemble the Puzzle to bring back Atem so he could Duel him. However, Aigami managed to acquire two pieces. He gave a piece to Sera, and Sera gave the piece to Yugi.

The Millennium Puzzle fully assembled in Yu-Gi-Oh! The Dark Side of Dimensions.

During Yugi and Kaiba's Duel, the Millennium Puzzle was reassembled, but nothing happened, much to Kaiba's anger. Later, after Kaiba was defeated by Aigami during Yugi and Kaiba's Duel against Aigami, Kaiba gave Yugi the Puzzle. At the last turn of the Duel, Atem was revived, and defeated Aigami. Atem then made the Puzzle disappear as he returned to the spirit world. Later, when Kaiba combined his technology with Agami's cube to reach Atem's palace, the puzzle was shown to be back in Atem's possession just before he and Kaiba were presumably about to duel.

The Millennium Puzzle's shape appeared on Dimitri's shirt in King of Copycats.[7][8]

In Reshef of Destruction, the ritual to revive Reshef the Dark Being scatters the Millennium Items, including the Puzzle, across the globe. Yugi is frantic to find it and save his other self. It's eventually revealed that Bandit Keith came into possession of the Puzzle; he uses it and the other Items in a ritual to attempt to awaken Ra. When this attempt fails, the Puzzle is taken from him and Yami Yugi reemerges, frying Keith with lightning from Ra.

However, Reshef possesses Keith, making him steal and break the Millennium Puzzle. Before Yugi can assemble the pieces, Para steals them and brings them to Sol Chevalsky's castle. Once in Pegasus' possession, he uses them to bait the player, Yugi, and Joey into coming to his castle, and gloats that with the source of Yugi's power in his hands, there's no one left who can defeat him. Upon defeat, Pegasus returns the pieces and Yami Yugi is freed, enabling him to help weaken Reshef to the point where he can be beaten. 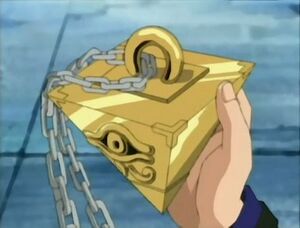 The Pendant resembles an upside-down pyramid with an eye on the front. It has a ring on top, allowing it to be worn around the owner's neck.

The puzzle is extremely complex and difficult to solve, having taken Yugi at least eight years to successfully assemble it. In addition, in the manga, when Mr. Otogi tried to rebuild it after he shattered it, he ended up almost trapped in an illusion of the puzzle's maze, indicating that only a wise, chosen one can build it, as Ryuji Otogi could also not fit the pieces in.

Dark Yugi describes the power of the puzzle as "the power of unity", comparing a puzzle's pieces forming a whole to friends coming together. Yugi frequently credits the Millennium Puzzle with bringing him friendship with Joey Wheeler. Yugi originally used the phrase "Something that can be seen, yet cannot be seen" to describe the Millennium Puzzle before it was completed, since even though you can see the pieces, you can't see the whole puzzle since it isn't complete. This riddle has been used many times in the Japanese version of the anime, with different characters providing different answers.

In addition to holding the soul/spirit of Pharaoh Atem himself, the Puzzle is able to fulfill one single wish of the person who had solved it and heighten its owner's chance of success in a game, judging by their skill-level as well as the importance of the game at hand. The hieroglyphs inscribed on the puzzle say, "The one who solves me shall gain the powers and knowledge of darkness..."[1]

Its main power grants the owner the powers and knowledge of darkness and shadows, giving him incredible skill at strategy and allowing him to use ancient and powerful magic. That magic is mainly used to start and control Shadow Games. The Millennium Puzzle is the strongest and most powerful of all the Millennium Items. When Yugi activates its magic, the Eye of Wdjat glows on his forehead. Its most well-known power is Yugi switching his body and mind with the spirit of the Pharaoh.

In the Toei anime, Shadi entered Yugi's mind room belonging to Dark Yugi, looking for the secret powers of the Millennium Puzzle. Dark Yugi confronted him and challenged him to a game, where he was to find the true mind room amongst the countless mazes of doors that were riddled with traps. He failed, and was very nearly killed by a particular trap which caused the floor of the room to collapse. Dark Yugi saved him and Shadi left, defeated. A similar event happens in the NAS anime during the Duelist Kingdom arc, but it is Yugi Muto who rescues Shadi, not Yami Yugi. Yami Yugi also explains to Shadi that the Millennium Puzzle holds the power of unity, just as the many pieces of the Millennium Puzzle assembled and united.

It is able to initiate Shadow Games and corresponding Penalty Games that Dark Yugi used to punish those who harmed Yugi or his friends. In the Memory World arc, Atem couldn't summon the Egyptian Gods without the immense power of the puzzle. It can cast illusions, and can manipulate the minds and souls of others, such as when Yami Bakura put Bakura's soul inside of "Change of Heart" but Yami Yugi changed it to Yami Bakura's soul in the card. It can even interfere with the magic of other Millennium Items, and at its full power, it can repel the dark Seal of Orichalcos.

Other lesser-known powers include protecting the user and others from harm and magical forces, and the ability to communicate with Duel Monster spirits. Also, it allows its owner to sense and feel thoughts and emotions, and to enter the minds of others. It can also sense impending danger and the great powers of other mystical artifacts and beings.