The Impersonator of Death is a character in the Yu-Gi-Oh! anime. He is unnamed in the English version and called the Mimic of Doom in Yu-Gi-Oh! Reshef of Destruction. The impersonator was one of Maximillion Pegasus' hired Eliminators. He replaces the Ventriloquist of the Dead from the manga.

Initially, he has the appearance of Seto Kaiba, although with empty eyes and black markings across his face. He claims to be the ghost of the recently deceased Seto Kaiba, back for revenge against Yugi. He uses Kaiba's Deck, which was stolen by Pegasus's henchmen.

After it is revealed that Kaiba is still alive, he sheds his disguise, revealing his true form to be that of an ugly, obese clown. During his transformation, he busts out of his Kaiba costume, and his bodyfat ruptures from underneath his disguise.

In the English dub, after being exposed, he reveals that he is actually Kaiba's evil side, which Yami Yugi had separated from Kaiba and banished to the Shadow Realm at the end of their first Duel, but was brought back by Pegasus.

In the Japanese version, after being exposed, he reveals himself as the Impersonator of Death, an employee of Industrial Illusions. 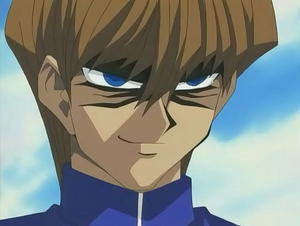 The impersonator with the appearance of Seto

The impersonator faced Yami Yugi in a Duel over Mokuba's release, and he "proved" that he was Seto Kaiba by playing the "Blue-Eyes White Dragon". 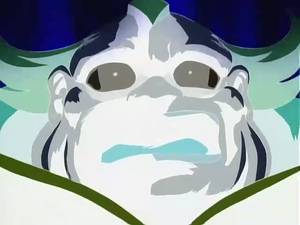 The impersonator being inflicted with a Mind Crush

He began playing monsters in defense mode until he found the final "Blue-Eyes", but Yugi revived one of the other "Blue-Eyes White Dragons" and raised its power with "Mystical Elf" and "Book of Secret Arts", using it to destroy the impersonator's final dragon and wipe out his remaining Life Points. Yugi defeated him and used a Mind Crush to banish him back to the Shadow Realm for good. In the Japanese version, he used the Millennium Puzzle's power to make him disappear off the face of the earth. Despite Yugi's victory, Kemo took Mokuba back to Pegasus.

The Impersonator of Death used Kaiba's Deck, which was stolen by Pegasus's henchmen.