Kemo, known as Saruwatari (猿渡 Saruwatari) in the Japanese version, is a character in the Yu-Gi-Oh! anime and an antagonist. In episode 3, he is credited as man in black (黒服の男 kurofuku no otoko).

Kemo is one of Maximillion Pegasus' suits. 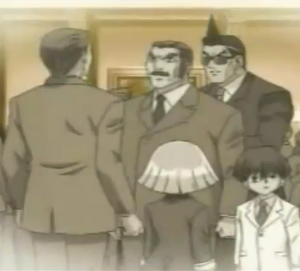 Kemo notifies Gozaubro of the infection.

Kemo worked for KaibaCorp, while it was managed by Gozaburo Kaiba. After Zigfried von Schroeder infected the KaibaCorp mainframe, Kemo notified Gozaburo of the infection.[2] 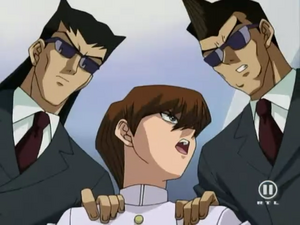 Following a confrontation between Seto Kaiba and Gozaburo, over Gozaburo's decision to use Seto's virtual technology for war, Gozaburo had two guards, including Kemo escort Seto out.[3] 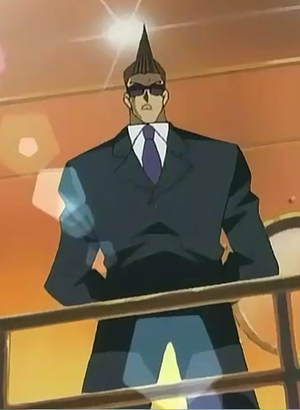 Kemo, during the Duelist Kingdom tournament

Kemo worked for Maximillion Pegasus during the Duelist Kingdom tournament. He apprehended Mokuba Kaiba after Mokuba's Duel with Yami Yugi. Yami then challenged him to a Duel for Mokuba's freedom. Since Kemo did not play, he arranged for the Impersonator of Death to Duel Yami. Although Yami won, Kemo still took Mokuba back to Pegasus.

Some time after Kaiba arrived on the island, Kemo approached him and commented that it had been a while. Kemo held a gun to his head but Kaiba disarmed him using the card, "Gyakutenno Megami", to jam his gun (this was cut from the dub). Kaiba then forced Kemo to take him to Mokuba's cell.[4]

Kemo later acted as the guard at the entrance to Pegasus' castle and attempts to stop Téa Gardner, Tristan Taylor and Bakura Ryou from entering as they were not Duelists. Mai Valentine then flirted with him, distracting him long enough for the others to dash in, closing the door behind them.

During Yugi Muto and Joey Wheeler's first stay in the Virtual World, Kemo attempted to break into the room where their bodies were. Téa Gardner and Tristan Taylor put up a desperate defense to stop them, using furniture to block the door. When everyone awoke after the Big Five had been defeated, Kemo fled in order to warn the Big Five members.