The Great Leviathan, or the Orichalcos God in the Japanese version (also dubbed the Grand Dragon Leviathan in English advertisement media) was the deity of the Orichalcos and the main antagonist of the Waking the Dragons arc.

The Great Leviathan's size varies; during the Battle of Atlantis, the Great Leviathan appeared to be smaller than it was when it was revived 10,000 years later. After its revival, the Leviathan was large enough to wrap around the island of Atlantis twice, and it dwarfed the Egyptian Gods; its head was around the size of the average God monster. This may have been due to not having as many souls to empower it the first time, as Dartz stated that he had collected millions of souls by the time of the Leviathan's resuscitation and could not have been able to claim as many from the Atlantean populace alone. It could also potentially be due to the Leviathan being weakened from the prolonged hostilities (it was noted that there was more than one battle during the Atlantis conflict). As Critias and Hermos were not present during the flashback, it was assumed that they were defeated and sealed prior to the final battle.

The Great Leviathan is a purple serpent with a pink belly. It has ruffles of teal fur over its body, including its forked tail and as its membranes. Its massive head has long jaws with an underbite and simple teeth; two small, pink mandibles protrude midway along the bottom jaw. The head and bottom of the lower jaw are coated with a grey carapace; the crest has six spikes, five pointing back and one pointing forwards. The Leviathan has small yellow eyes; Dartz exhibited these when he was merged with it.

After its body is slain by the Egyptian Gods, the Great Leviathan's spirit takes on a different form resembling "Divine Serpent" in color, with glowing red eyes, draconian jaws filled with large fangs and a black, triangular crest. The Leviathan also takes on a shadowy form at times when it is incorporeal.

The Great Leviathan was an extremely ancient and powerful entity, and was the one responsible for the creation of the Orichalcos Stones, which in turn, granted wielders immense knowledge and greed. Hence, it was responsible for the Atlanteans to degenerate, corrupting their personalities, which could be reflected as when the citizens turned into hideous monsters. It was also capable of removing souls from both humans and Duel Spirits on a global scale, absorbing them physically in order to absorb their souls and used tentacles from its substance.

Much like Zorc, the Leviathan was said to have been born through the hatred and rage of humanity, and it was even considered to not be a Duel Spirit, such as the Egyptian Gods. It was capable of usurping control of the Egyptian God Cards as well draining their power, similar to when Zorc created a solar eclipse. The Leviathan's powers stemmed from the darkness of human souls and captured souls themselves.

Via that source, the Great Leviathan was shown to have immense offensive and defensive powers during the final battle. Its mere presence was capable of creating a storm of global proportions. The Great Leviathan had singlehandedly and simultaneously defeated up to twelve powerful Duel Monsters who fought together, including Blue-Eyes Ultimate Dragon and all three Legendary Knights, while it remained unharmed from all of their attacks. It was capable of blasting numerous shards that could defeat extremely powerful Duel Monsters in a single hit.

The Great Leviathan's body could be subdued or destroyed, but its spirit could not be defeated conventionally; its physical body was defeated through Yami Yugi's conversion of humanity's darkness into light which was channeled into the attacks of the Egyptian Gods. It was finally destroyed when Yami Yugi vanquished the last of his negative emotions through his good memories and friendships.

Dartz, the king of Atlantis, was brainwashed and manipulated by the Orichalcos Stone and told to resurrect their god, the Great Leviathan, by using human souls. It was defeated by the three Legendary Dragons, though Atlantis was sunk in the process. Like Zorc Necrophades, the Great Leviathan was pure evil and wanted nothing more than the extermination of all life on Earth. In order to resurrect the Leviathan, Dartz needed the souls of the three Duelists who wielded the Legendary Dragons cards: Yami Yugi, Seto Kaiba, and Joey Wheeler.

As more souls were collected, the Leviathan became more and more active, especially as the souls of the Chosen Duelists were collected. After the capture of Joey's soul, a manifestation of the Leviathan began to appear in the sky across the world, and by the time that Kaiba's soul was captured, it was conscious enough to roar from within its astral prison. 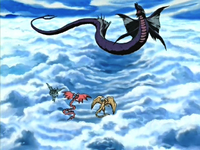 The body of the Great Leviathan was slain, and all of the souls that it captured were released, including that of Dartz. However, the Leviathan's spirit remained, and it returned alongside Dartz. Yami Yugi was able to release Dartz from the Leviathan's malignant influence: He did that by using his own light that was represented by the vessel of a memory container to destroy all of the hatred and resentment from the world that powered the Leviathan and vanquished it for good.