Iona is a character in the Yu-Gi-Oh! anime. She was the wife of Dartz, the mother of Chris and queen of the ancient city of Atlantis.

Iona was married to Dartz and had a daughter with him named Chris. 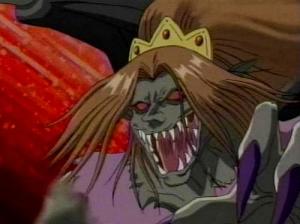 Iona, turned into a monster.

Dartz became king of Atlantis around the time the Orichalcos arrived in the city. A few years after its appearance, people started turning into monsters. Dartz believed this was the Orichalcos showing the true colors of wicked people. Iona began to transform into such a monster and ran when approached by Dartz. Dartz ran after her, but the time he caught up, she'd completely transformed into a winged demon-like monster. She is seen dropping a body when Dartz approaches her (the body is removed in the dub). She proceeds to attack Dartz, but he strikes her with his sword, killing her (this is also removed from the dub).