From Yugipedia
Jump to: navigation, search
For the manga version of this character, see Dinosaur Ryuzaki (manga).

Rex Raptor, known as Dinosaur Ryuzaki in the manga and Japanese anime, is a Dinosaur Duelist. Despite his introduction as a powerful Duelist, he becomes a source of humiliation along with his companion, Weevil Underwood, after suffering defeat to Joey Wheeler, and begins considering Joey his rival for this reason. Alhough Rex is vindictive, arrogant, and tyrannical, he plays fairly. 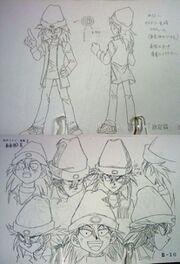 Rex's design incorporates multiple layers of clothing and a wide range of expressions. Depicted here is the Duelist in full regalia from front and side views and alongside views of his head from different angles.

Rex's character design was overseen by Kazuki Takahashi. His usual outfit consists of a green jacket and a red beanie cap, plus tan pants. In Duelist kingdom, he wears a tan vest-thing on his jacket, and a black shirt. In Battle City onward, he wears a green jacket, and a yellow shirt. His hair is brown with dyed purple strands next to his forehead. He has purple-blue eyes, whenever his irises are shown (his pupils are usually too small to determine his eye color). He carries a KaibaCorp Duel Disk on his left hand. In the Waking the Dragons arc, he has a Chaos Duel Disk.

In Yu-Gi-Oh! The Movie, Ryuzaki has black hair with dyed pink strands and a purple cap.

In the original anime, Rex speaks with a Kansai accent.

"Dinosaur" is a nickname; "Ryuzaki" is his given name. In the dub, he is named after the Tyrannosaurus Rex and the Velociraptor, two species of dinosaurs.

Rex in Yu-Gi-Oh! The Movie.

Rex appeared in the Toei anime movie Yu-Gi-Oh! The Movie, when he was seen getting up after losing to Seto Kaiba.

Rex, as the Western Japan Representative, participates in the Japanese National Duel Monsters tournament, where he loses to Weevil Underwood in the finals.

Rex was invited to the Duelist Kingdom tournament. Being a runner-up in the last tournament, he was one of the few participants given a room on the boat journey. He invited Mai Valentine to his room. Mai challenged him to a Duel, where she would give him a kiss if he won (do anything he wants for him the Japanese version), but she would get the room to herself if she wins.

Confident that he wouldn't lose, Rex accepts. However Mai insisted that they use her cards. Unbeknownst to Rex, Mai sprayed them with different perfumes and was able to tell what cards he drew. With this advantage, Mai won and booted Rex out of the room.

During the tournament, he was constantly berated by the fact Mai had more Star Chips than him. He challenged her to a Duel to get revenge but Mai, preferring to avoid him, was content to use the excuse that she had already "beaten" him once. However since Mai had previously lost to Joey Wheeler and considered it obnoxious to challenge him again, she agreed to Duel Rex, if he defeated Joey for her.

In the Battle City arc, he was seen briefly, losing to Espa Roba, who cheated and had "Jinzo" crush Rex's "Serpent Night Dragon". Rex then advised Joey on Roba's strength and left the tournament afterwards.

He later observed the semifinal match between Yugi and Kaiba in Domino City, amongst other Duelists. 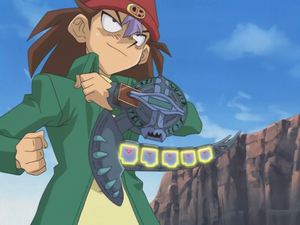 Rex with a Chaos Duel Disk.

In the Waking the Dragons arc, it was revealed that he and Weevil lost a good deal of their popularity after the tournament and they eventually ended up wandering Domino City where they were ambushed by Gurimo. Their souls were taken, and later released when Yugi Muto defeated him.

The two of them then trailed after the party until Yugi's soul was taken by Rafael and they begged him to take them on their Helicopter. Rafael and Alister took them to Dartz, who agreed to give them power if they passed the necessary test. Each of them was given a piece of the Orichalcos Stone and both must succeed in grasping them, which both of them did.

Rex and Weevil improved their Decks by taking cards from Dartz's massive collection and Rex challenged Joey to a rematch. During the Duel, Joey used Rex's "Red-Eyes Black Dragon" against him, much to Rex's displeasure and anger. Despite using "The Seal of Orichalcos" Rex lost at the hands of Joey's "Gearfried the Swordmaster", sending his soul to Dartz again. He was released at the end of the arc when Dartz was defeated. He and Weevil fled from the hospital they found themselves in.

Sebastian Arcelus replaces Sam Regal as Rex's voice for this season, which is why Rex's voice is higher pitched than it was in seasons 1 and 2.

Their next plan was to enter the KaibaCorp Grand Championship, where they both impersonated Fortune Salim. They were quickly defeated by Zigfried von Schroeder and sent back to Japan by KaibaCorp. (In the dub, their fate after the Duel is unknown, although they were briefly seen after Yugi defeats Leon von Schroeder, possibly in Domino City, watching in disgust, indicating that they were sent back.)

Rex and Weevil's last attempt at revenge was to steal the Egyptian God Cards but they mistakenly grabbed Yugi's bag containing all of his Millennium Items. Yugi tried to stop them, but couldn't catch up. While examining their prize, they were sent to the Shadow Realm by Yami Bakura, who stole the Millennium Ring back from them afterwards. While Zorc's rampage over Ancient Egypt was in full swing, the events then were affecting the modern world as well- where Rex was shown clinging on to a pole so to not to blown away by the wind. After Zorc's defeat, he was also seen.

Rex is shown in the last episode of Yu-Gi-Oh! Dueling with Weevil (cut from the dub).

In Yu-Gi-Oh! 5D's, a parody of him named Dinosaur Hakozaki is listed as one the Duelists defeated by Hunter Pace.[1]

Rex Raptor chiefly employs a Dinosaur Deck, focused on Dinosaur-type monsters. His dueling strategy involves offensive Beatdown tactics, concentrating on using high ATK-powered Dinosaur monsters to bring down his opponent's Life Points as quickly as possible. In addition, he makes use of a confluence of Dinosaur-support Magic and Trap cards to augment on the brute power of his Dinosaurs on the dueling field. Though his signature cards are centralized around Dinosaurs, his strongest monsters tend to be Dragon-Types, such as the Red-Eyes Black Dragon, Serpent Night Dragon, and Tyrant Dragon.

During Duelist Kingdom, Rex's Deck contains an assortment of Dinosaur-Type monsters, his most powerful cards being the Dragon-Type "Serpent Night Dragon" and "Red-Eyes B. Dragon". His style of Dueling is simple, relying on the brute power of his Dinosaurs augmented by the Dueling field to strengthen them.

Although Rex wasn't seen Dueling, he was shown losing to Espa Roba, losing his ante of "Serpent Night Dragon".

In Waking the Dragons, Rex uses a Dinosaur Deck heavily focused on swarm tactics. In addition, he utilizes the "The Seal of Orichalcos" to turn normally weak monsters into powerful beatsticks. Echoing of his earlier Deck, Rex's strongest monster is not a Dinosaur, but the Dragon-Type "Tyrant Dragon".

Rex was only seen Dueling once, attempting to infiltrate the Grand Championship but getting thrown out when he and Weevil lost to Zigfried von Schroeder.