It is day two of the Battle City Tournament and Joey Wheeler is still looking for an opponent to fight his first Duel with. 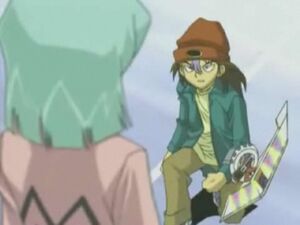 Wanting to find a worthy opponent to defeat, he arrives just in time to watch Espa Roba, a Duelist claiming to have psychic powers, defeat Rex Raptor. As per the Battle City Rules, Rex had to give up his "Serpent Night Dragon" to Espa as it was his rarest card. Espa, knowing Joey was the runner-up in Duelist Kingdom, challenges him to a Duel and Joey accepts.

In the hospital, Tristan visits Serenity and brings a laptop with him, so he can watch the Duel online and tell Serenity how it is going. However, he has trouble figuring out how to make the computer work and has to get a nurse to help him.

The Duel does not start off very well for Joey, as he still does not know some of the Battle City rules (including Tributes) and is intimidated by Espa's psychic powers.

Yugi is watching the Duel from a rooftop and sees Espa's brothers spying on Joey's cards, revealing that Espa is actually cheating. Yugi decides to just watch and let the Duel take its course.

When Joey draws, Espa's brothers see the card and tells their brother it appears to be another "Graceful Dice". Espa, using his "psychic powers", then claims this to Joey. Joey however sees that something is up as the card he drew was "Skull Dice". Joey decides that this is his chance to turn the Duel around in his favor. Joey sets two cards and Summons "Swordsman of Landstar".

Espa, assuming that Joey has two set "Graceful Dice" decides that won't matter for his next move. Espa Summons "The Fiend Megacyber" and uses it to attack "Swordsman of Landstar", but Joey activates "Skull Dice" and "Graceful Dice" when Espa thought he had 2 "Graceful Dice" set. This allows Joey to surprise Espa and make a comeback.

At this point, Joey points out to Espa that due to how he held his cards, Espa knew he had two "Dice" cards, but he couldn't tell which ones. Joey then states this means that Espa is cheating and someone is telling him what cards are in his hand. Espa becomes shocked he figured that out. Rex realizes that Espa must have used the same cheating method on him too. Espa's brothers realize they're busted for sure. Yugi congratulates Joey on his efforts as he is now in control of the Duel.

Mokuba soon finds out about the cheating, dashes in and tackles the wicked accomplice up on the roof. He threatens to expel Espa from Battle City, but the brothers talk him out of it after telling him their sad story about being orphans and having no one but Espa to protect and care for them.

Mokuba, having been in a similar situation, is convinced to let the Duel continue as long as they stop cheating. His decision is also influenced from seeing Yami Yugi watching the Duel from a different roof during his conversation and thinking that Yugi would give them a second chance as well. He stands by to be sure they don't start doing it again.

Joey appears to have regained control of the duel, bringing Espa's Life Points down to 1440. However, Espa activates "Mind Control" to take control of Joey's "Swordsman of Landstar".

He then Tributes it to Summon "Jinzo", which makes all Trap Cards useless, putting Joey in a tight spot.

At this point, Joey points out that Espa Roba was cheating and Commissioner Mokuba catches Espa Roba's brothers helping him. Mokuba is about to expel Espa from the Duel and Battle City, but Espa's brothers explain to Mokuba why they were doing this and after a little argument, Mokuba decides not to cancel the Duel. Espa Sets a card.

Turn 7: Joey
Joey draws. He then Sets "Chasm of Spikes".

Turn 8: Espa
Espa draws "Jinzo". He then Tributes "Swordsman of Landstar" in order to Tribute Summon "Jinzo" (2400/1500) in Attack Position. Due to the effect of "Jinzo", Joey's Set "Chasm of Spikes" is destroyed. While Jinzo is on the field, its effect prevents the activation of Trap Cards and no Trap Cards can be Set either.

Mariko Nagahama voices "nurse" in this episode, but the role is uncredited, since she is already credited for playing "Roba's brother A".