Yami Bakura and Bonz Duel in a Shadow Game. Whoever wins goes to the finals, while the loser goes to Hell (or the the Shadow Realm in the English dub).

Yami Bakura takes over his vessel, the good Bakura's body, steals a Duel Disk and Locator Card from a random duelist and heads to a graveyard, following a rumor there are Duels being held there. Because Yami Bakura disliked the deck that the random duelist had and threw the cards back to him, it is unknown how he got his ghostly deck, although stealing it from another random duelist is the main possibility. There is also the possibility that when Yami Bakura and Marik first met and made their deal, Yami Bakura created a deck before injuring himself and kept it in his pocket, since Marik asked him how good his Dueling skills were while making their deal.

He finds Bonz, Sid and Zygor dressed in Halloween costumes, terrorizing random duelists in order to obtain Locator Cards without even dueling.

Even though they'd already obtained five Locator Cards this way, Yami Bakura is not impressed and challenges Bonz to a duel in the Shadow Realm. Not knowing any better, Bonz accepts. By losing the Duel, Bonz, Sid and Zygor are sent to Hell (banished to the Shadow Realm in the English dub). Yami Bakura obtains his sixth Locator Card, qualifying for the Battle City finals.

Meanwhile, Yugi and Joey Wheeler have both qualified for entry into the Battle City Finals. By putting the Locator Cards on the Duel Disk (5 in the Monster Card Zones and the last in the Field Spell Zone) they receive instructions to go to an unfinished stadium which would be the location of the finals. 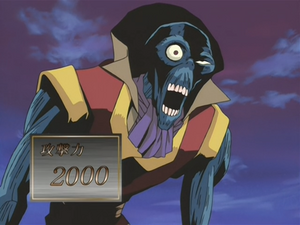 The Earl of Demise is summoned.

Bonz then activates "Polymerization" to fuse "Dragon Zombie" with "The Snake Hair" and Fusion Summon "Great Mammoth of Goldfine" (2200/1800) in Attack Position. Under Battle City Rules, Fusion Monsters cannot attack during the same turn they are Fusion Summoned. Bonz Sets a card. He intends to use his set card once "Great Mammoth of Goldfine" attacks and destroys "The Earl of Demise".

Turn 6: Bonz
Bonz draws "Nightmare's Steelcage" and subsequently activates it. Now no monsters can attack for two turns. Bonz then Sets a card.

Turn 7: Yami Bakura
Yami Bakura draws "Ectoplasmer" and subsequently activates it. Now both players, during each of their turns, can choose up to two types of monsters to be converted into ectoplasm, with half of the turn player's Tributed monsters' ATK being inflicted as damage to their opponents. Yami Bakura activates the effect of "Ectoplasmer" and selects "Fiend" for its effect, which causes "The Earl of Demise" to be Tributed (Bonz 600 → 0).