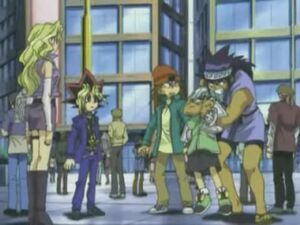 As Seto Kaiba announces the start of the Battle City, Yugi and Joey start moving around as everybody else does. Joey then spots the Rare Hunter who took his "Red-Eyes Black Dragon". Joey then challenges the Rare Hunter to an ante Duel so that he will be able to win it back. The Rare Hunter refuses to Duel him, but wants to Duel Yugi to get his "Dark Magician".

At Kaiba's control center, he watches the Duel taking place. He is informed that Yugi's opponent is one of the Rare Hunters who had hacked themselves into the KaibaCorp mainframe to enlist themselves as participants. Hearing this, Mokuba tries to go and stop the Duel and disqualify him, but Kaiba refrains him from doing so, as he wants the other Egyptian God Cards from the Rare Hunters.

Turn 3: Yami Yugi
Yami Yugi draws. He then Tributes "Beta The Magnet Warrior" in order to Tribute Summon "Berfomet" (1400/1800) in Attack Position. Since "Berfomet" was Normal Summoned, Yami Yugi activates its effect to add "Gazelle the King of Mythical Beasts" from his Deck to his hand. Yami Yugi then activates his face-down "Polymerization" to fuse the "Gazelle the King of Mythical Beasts" in his hand with "Berfomet" and Fusion Summon "Chimera the Flying Mythical Beast" (2100/1800) in Attack Position. Under Battle City Rules, Fusion Monsters may not attack in the same turn that they are Fusion Summoned. Yami Yugi Sets a card.