"A Duel with Destiny, Part 2", known as "One Strike That Changes the Future" in the Japanese version, is the ninety-fourth episode of the Yu-Gi-Oh! anime. It first aired in Japan on February 12, 2002 and in the United States on October 18, 2003.

Although Kaiba fights well against Ishizu, she still is unfazed by him thanks to her Millennium Item. When Ishizu has him cornered and nearly out decked, it seems that her vision will come true and that Kaiba will be defeated. Suddenly Kaiba receives a vision of his own from the Millennium Rod that might save him from Ishizu. 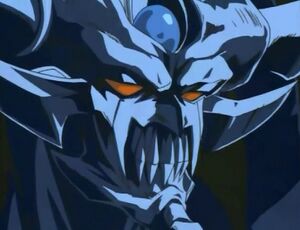 Ishizu has 2400 Life Points remaining and controls one set card.

Turn 11: Kaiba
Kaiba activates his face-down "Virus Cannon" to send all Magic Cards in Ishizu's Deck and hand to her Graveyard. Ishizu pays 1000 Life Points (Ishizu 2400 → 1400) in order to activate her face-down "Exchange of the Spirit", which switches the cards in both duelists' Decks with those in their Graveyards. This leaves Kaiba with six cards in his Deck while Ishizu gets back every card that Kaiba made her send to the Graveyard.

Turn 12: Ishizu
Ishizu draws "Kelbek" and subsequently Normal Summons it (1500/1800) in Attack Position. She then Sets a card.

Turn 16: Ishizu
Ishizu draws. She then Sets a card ("Sacrifice's Blast"). In the anime, Ishizu reveals (to the viewers, thinking to herself) that this Trap has already begun infusing its power into one of Ishizu's monsters ("Zolga"), so that when Kaiba uses "Soul Exchange" to seize its control and tribute it, it will be transferred to the Tribute Summoned monster i.e. Kaiba's "Obelisk the Tormentor". Once Seto attacks directly with "Obelisk", the effect of "Sacrifice's Blast" will activate, defeating Kaiba. Ishizu Normal Summons "Agido" (1500/1300) in Attack Position. Kaiba activates his face-down "Soul Exchange" to allow himself to Tribute his opponents' monsters as if he was their controller. Kaiba then Tributes "Zolga", "Kelbek", and "Agido" in order to Tribute Summon "Obelisk the Tormentor" (4000/4000) in Attack Position.

Turn 17: Kaiba
Kaiba draws "Polymerization". He prepares to use "Obelisk the Tormentor" to attack directly, but Yami Marik's Millennium Rod activates and gives Kaiba a vision of the past. He sees himself as an ancient priest carrying a woman while standing in front of a stone tablet showing the "Blue-Eyes White Dragon". This convinces him to change his strategy.