From Yugipedia
Jump to: navigation, search
For other versions of this character, see Weevil Underwood (disambiguation).

Weevil Underwood, known as Insector Haga in the manga and Japanese version, develops into a rival and becomes jealous of Yugi Muto. He displays an adoration for insects, and as such his Deck is based on Insect-Type monsters. 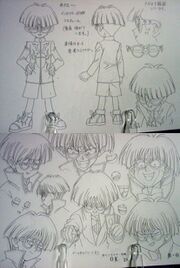 Weevil's design incorporates multiple layers of clothing and a wide range of expressions. Depicted here is the duelist in the regalia from front and rear views and alongside views of his head from different angles as well as close ups of his glasses.

Weevil's character design was overseen by Kazuki Takahashi. He has turquoise hair arranged in a "Beatles' Haircut" fashion. His eyes are blue.

In Season 1, Weevil wears large round yellow glasses, which have an insect horn in the center to connect the lenses. His glasses appear to magnify his eyes. His outfit consists of a green jacket with a raised collar, a white shirt underneath, a red bow tie, brown trousers, and brown shoes.

In subsequent season, Weevil wears large round yellow glasses with a beetle in the middle. He wears a closed green jacket with a beetle pattern on the front, black shorts, and green-and-black sneakers with wing shoe laces. He carries a KaibaCorp Duel Disk on his left arm; in the Waking the Dragons arc, he has a Chaos Duel Disk instead.

In the Singaporean English dub, Weevil speaks with a Peter Lorre-esque voice.

His Japanese given name "Haga" (羽蛾) literally means "Winged Moth", referring to his first ace monster, "Great Moth". It can also be played on the word "Hakazu" (剥がす) which means "to peel off", referring to the many types of insects that go through molting during their life cycle. His title "Insector" refers to his Insect Deck.

His English given name comes from "Weevil", a small beetle with an elongated snout. Many types of said insect are also pests of crop, referring to his less than pleasant personality. His surname "Underwood" is played on "under the wood", possibly to compliment his Insect Deck.

In the Spanish dub, he is named Weevil Underwood. However, in the first episode a narrator mentions that his nickname is "el gusano peleón" (lit. "the fighting worm"); from then on, he is referred to as "el gusano" (lit. "the worm"). 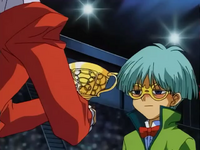 Weevil receives his trophy from Pegasus 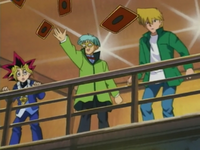 Upon meeting Yugi and his friends, he seemed a humble and respectful person, in contrast to the bold and arrogant Rex Raptor. However, he quickly revealed himself to be underhanded and sneaky (while Rex Raptor, ironically, shows decent sportsmanship and plays fairly). On the boat ride to the tournament, he confronts Yugi Muto and asks to see his set of Exodia cards. Upon seeing them, Weevil takes them and chucks them off the boat, leaving Joey Wheeler to jump in to retrieve them. Laughing, Weevil returns to his cabin, confident that he has destroyed his major source of competition.[1] Yugi defeats him in the first duel of the tournament,[2] forcing Weevil to be the first duelist to leave the island along with the others who had been defeated in their first round.[3] 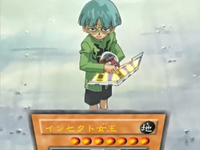 Weevil is next seen in the Battle City arc, where he duels Joey, after "paying" a boy to plant a "Parasite Paracide" card into Joey's deck.[4] Despite using this to his advantage, he loses and is forced to give Joey his rare card, "Insect Queen". As a result of losing, he is ejected from the Battle City tournament.[5]

He is later seen observing the semifinal match between Yugi and Kaiba in Domino City among other duelists. 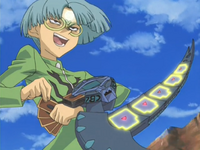 Weevil with a Chaos Duel Disk

In the Waking the Dragons arc, Weevil and Rex are together, having lost a great deal of their former popularity after they had been humiliated in the the Duelist Kingdom and Battle City tournaments. However, they soon meet and duel Gurimo; as a result of losing, both of them have their souls taken. They were later granted their freedom after Yugi Mutou defeated Gurimo.

The two of them follow the group until Yugi's soul is taken by Rafael after Yami Yugi loses to him. They beg Rafael to take them with him, and he grudgingly accepts their pleas. He and Alister take them to Dartz, and the two of them beg for more power to settle old scores. Dartz decides to test them by seeing if they could each grasp a piece of the Orichalcos Stone, with the penalty for failing being their souls taken again. Both of them succeed, and they improve their decks with cards from Dartz's massive collection.

Weevil then proceeds to confront Yugi and duels him, with "The Seal of Orichalcos" empowering his insects. In the end, however, Yugi wins anyway, and Weevil's soul is taken by the magic of the very Seal which he has employed. His virtually comatose body is found by Ironheart when the train on which he had previously been dueling with Yugi derails and falls off a cliff, and he is transported to a hospital. When Dartz is defeated, Weevil's soul is released from imprisonment, and he wakes up in his hospital bed in the same room as Rex, who leaves with him.

Weevil and Rex's next plan was to enter the KaibaCorp Grand Championship, where they both impersonated the duelist Fortune Salim. They were quickly defeated by Zigfried von Schroeder and sent back to Japan by KaibaCorp. (In the dub, their fate after the Duel is unknown, although they were briefly seen after Yugi defeats Leon von Schroeder, possibly in Domino City, watching in disgust, indicating that they were sent back.)

Their last attempt at revenge was to steal the Egyptian God Cards where they mistakenly grabbed Yugi's bag containing all of his Millennium Items. Yugi tried to stop them, but couldn't catch up. Meanwhile, while examining their prize, they were sent to the Shadow Realm by Yami Bakura, who stole the Millennium Ring back from them afterwards. While Zorc's rampage over Ancient Egypt was in full swing, the events then were affecting the modern world as well- where Weevil was shown chasing his deck which was blown away by the wind. After Zorc's defeat, he was also seen.

In the final episode of the Japanese version of the anime, Weevil is seen Dueling Rex after yet another argument.

In Yu-Gi-Oh! 5D's, a parody of him named Insector Hakata is listed as one the players defeated by Hunter Pace. [6]

Weevil uses an Insect Deck. His cards rely on "Insect Barrier" or "Cocoon of Evolution" to block opposing attacks while preparing to summon his strongest cards, "Great Moth", "Perfectly Ultimate Great Moth", and "Insect Queen". Compared to other duelists, Weevil uses few Spell and Trap cards; the ones he does use act to protect his insects or allow him to swarm the field with them.

During Duelist Kingdom, Weevil's Deck focused on evolving "Larvae Moth" with "Cocoon of Evolution" and using Equip Magic Cards to power up his weaker Insects.

During Battle City, Weevil utilized "Insect Barrier", "Parasite Paracide" and "Reckless Parasite" to prevent opposing monsters from attacking, having arranged for "Parasite Paracide" to be slipped into Joey's Deck without his knowledge so he could use it against him. He further focused on his new ace card, "Insect Queen". Oddly, while Seeker was looking up duelist's rarest cards, "Great Moth" was listed despite Weevil's rarest card being "Insect Queen".

Weevil was only seen Dueling once, attempting to infiltrate the Grand Championship but getting thrown out when he and Rex lost to Zigfried von Schroeder.