The Millennium Ring (Japanese: , Sennen Ringu) is one of the Millennium Items. It was the item held by Mahad in the past and Bakura Ryou in the present.

3,000 years before present day events (5,000 in the dub), the Millennium Ring and the other Millennium Items were forged in Kul Elna by sacrificing 99 souls of the Kul Elna villagers. The items were created in order to protect Egypt from attackers. Mahad had the Millennium Ring before Bandit King Bakura. Bakura sealed his soul in the Ring, along with a portion of Zorc's, which formed Yami Bakura.

In the present day at the start of the anime Bakura Ryou had it, he later lost it to Yami Marik. After Yugi defeated Marik, Marik Ishtar gave the Ring to Yugi. When Rex and Weevil mistakenly took Yugi's Millennium Items in an attempt to steal his Egyptian God cards, Yami Bakura retrieved it back from them. As the RPG replayed Atem's life, Bandit King Bakura managed to steal it again from Mahad. He once again gathered the Items and Summoned Zorc. Yugi then retrieves the Millennium Ring after the demise of Zorc and Yami Bakura. Also, as seen in a brief scene from the manga, Mana gained the Millennium Ring after the final battle with Zorc.

After the Battle Ritual, the Ring, along with all the other Millennium Items, fell underground. Later, in The Dark Side of Dimensions, while the Millennium Puzzle was being excavated, Mani found the Millennium Ring, and his mind got warped by its evil. He then got incinerated thanks to the Ring, and it got transported to another dimension. After Aigami came returned to that dimension, the Ring warped him into Corrupted Aigami, and transformed the Quantum Cube into a huge crimson cube that started absorbing the world and spread its darkness across the globe, until Aigami was defeated by Yugi and Atem, and was reverted back to normal. Following Atem and Yugi's attack, the Millennium Ring was supposedly destroyed.

In the non-canon Capsule Monsters, thousands of years before the events of Yu-Gi-Oh!, Alexander the Great came into possession with this item. During his time, he won many battles with it, and claims it to be his lucky charm, but years later, the Ring somehow corrupted his mind (possibly, it has the power to split a person's soul into two pieces: one is Alexander's light-soul and the other is Alexander's dark-soul due to the fragment of Zorc's soul and his power being sealed away).

In the manga, this ring has a gruesome effect on a wearer who has not the ability to maintain its shadow powers. If the wearer is not strong enough, then the ring will burn their soul and body, as seen when a thief who tried to steal it was forced to wear it by Shadi; after the ring's prongs punctured his chest, the thief had fire pouring out of his eyes and mouth and died horribly, a scene that Maximillion Pegasus saw, who was then subsequently forced to accept the Millennium Eye.

The strong people who managed to survive the ring's power are: Mahad, Bakura Ryou, Alexander the Great, Yami Marik, presumably, Mana in the manga, and Seto Kaiba in the Yu-Gi-Oh! Monster Capsule GB video game.

The ring is also featured on the chest of "Ma'at". 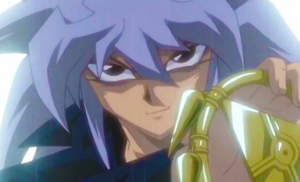 Its primary power is to guide the owner to whatever he seeks, including other Millennium Items, like a compass. It even detects non-physical objects like mystical energies or dark emotions. Like the Millennium Puzzle, it had a soul sealed inside of it, in this case a fragment of the soul of Zorc Necrophades (who had also lost his memories) and a portion of Bakura's past life, Bandit King Bakura. Another well-known power of the Ring is its ability to seal one's soul, or portions of one's soul into other objects, including itself and other Millennium Items.

It can also harness the magic of the Shadow Games. It can initiate mystical games where the players cannot be disturbed, cast illusions, and manipulate souls. It also gives the owner other magic powers, including clairvoyance, interfering with the powers of other Millennium Items, immobilizing people, and knocking people unconscious.

In the Memory World arc, Bandit King Bakura used it to access his Diabound's ability to camouflage itself in the dark, so he could sneak into the pharaoh's palace, though he later states that Diabound becomes more powerful the more Millennium Items he holds (a trait likely true regarding most monster spirits).

Only in the anime, the Ring also has an unexplained bond with its owner, as shown when Bakura mysteriously regained the Ring after Tristan threw it off a cliff into the forest in Duelist Kingdom. In The Dark Side of Dimensions, when young Bakura touched the Ring for the first time, it released tremendous amount of dark energy and merged with his body. This all was presumably due to Zorc's malignant powers. 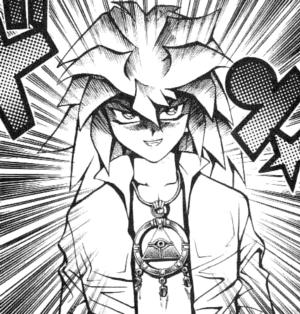 The Ring's prongs dug into Ryou's skin, preventing him from taking it off.

Only in the manga, if the Ring found a suitable host, it can dig its prongs into the wearer's chest, preventing them from taking it off.

In Yu-Gi-Oh! Capsule Monsters, its revealed that the Millennium Ring has the ability to split the owner's soul in two as seen with Alexander The Great and Yami Alexander.

Unlike the rest of the Millennium Items, the Millennium Ring seems to possess the darkest powers, possibly due to having been corrupted by Zorc's powers ever since its creation in the anime (where it fell into a chasm where the Tablet of Lost Memories rose from and Zorc emerging the first time). Mahad even mentioned that he could sense incredibly evil energy within the Ring when he wore it. Evidence of the evil powers still existing within it is that despite the fact that it is no longer housing the soul and power of Yami Bakura, who was Zorc, the Ring still had the ability to turn others evil, as it had done with Aigami and Mani in The Dark Side of Dimensions.