Alexander the Great is a character in the Yu-Gi-Oh! Capsule Monsters anime, based on the real-life historical figure bearing the same name.

Long ago, Alexander conquered many parts of the world with his large and powerful army. Eventually, he conquered Egypt and gained the Millennium Ring, learning of the power that could rule the world. However, it was locked away by Shadi, who feared that it would be used only by evil. After passing a series of tests, he gained the key to unlock this power, losing his vassals in the process. However, the key crumbled in his hands, and his dark half (created thanks to the Millennium Ring) was split apart from his good half, and he was trapped within the Pyramid and his good side being flung into the Capsule Monster world. Some time later, the descendant of Alexander's good side came along; Dr. Alex Brisbane, and was possessed by Yami Alexander, who then lured Yugi Muto and his friends to the Capsule Monster game.

Alexander the Great gathered only three monsters during his time in the Capsule World. However, they were three powerful monsters. The first was Seven-Armed Fiend, a strong monster which possessed a variety of dangerous abilities. It also had the power to summon several copies of Skull Knight 2.

The god monster Reshef the Dark Being was Alexander's most powerful capsule monster, and a symbol of his power. Reshef noticeably possessed a throne upon its head for Alexander to sit on during combat.

The good Alexander gave his third monster, Curse of Dragon, to Solomon Mutou to replace his destroyed Summoned Skull.

When Yugi and co. defeated his dark half, he was able to happily pass on. 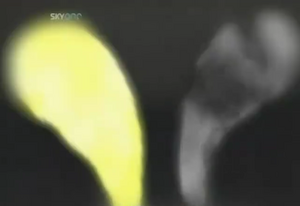 Alexander was able to split his soul into two beings, thanks in part to the Millennium Ring.